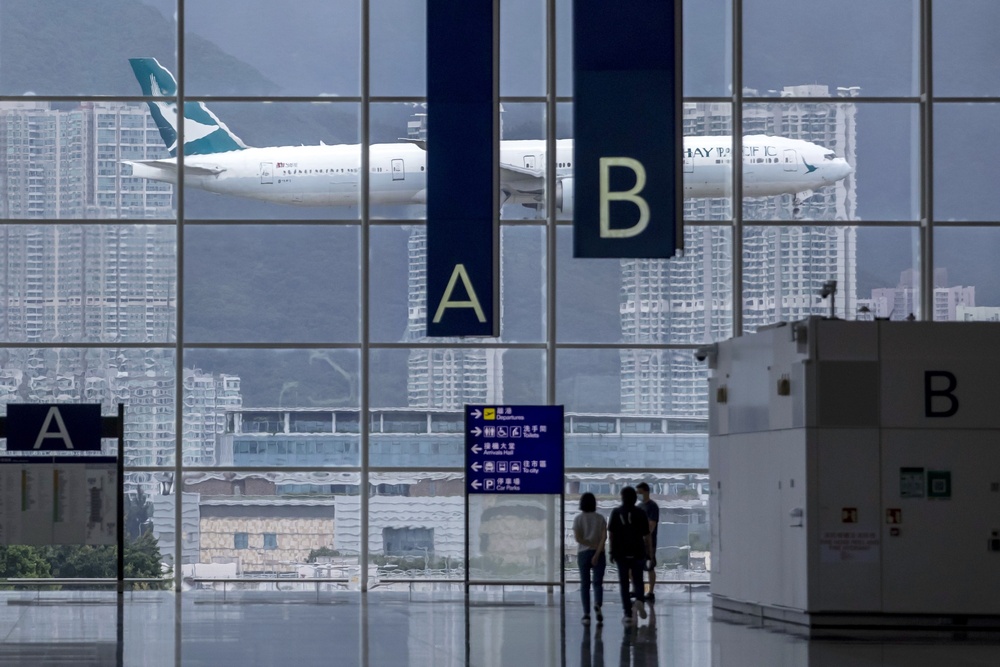 Cathay pilots worried about quarantine urged to call in sick

“Please assess yourself. Are you physically and mentally fit to fly? Not only may you be interned for up to 21 days quarantine at a government facility, but your family may also be interned for a minimum of three days. Again, assess yourself before every duty. Your well-being and mental state ultimately has an impact on the safety of the operation.”

That was the stark message conveyed in a letter this week to Cathay Pacific Airways Ltd. pilots, sent by the Hong Kong Aircrew Officers Association, the union representing them. Essentially, it’s encouraging members disturbed and upset about the city’s ongoing Covid-19 quarantine rules -- among the strictest in the world -- to consider calling in sick rather than risk taking to the skies.

The letter, sent on Nov. 17 and seen by Bloomberg News, is just the latest sign of rising tensions in Hong Kong’s business community as Chief Executive Carrie Lam’s government continues to pursue a zero-tolerance approach to Covid, even as other parts of the world start to open up and move on. The city’s desire to keep out the virus at any cost is manifesting in an array of extreme measures, leaving many with the luxury of choice seriously considering quitting the financial hub.

Two days before the union’s letter, on Nov. 15, Cathay -- the world’s third-biggest airfreight commercial carrier and a crucial link for Hong Kong to the outside world -- said crew members who stayed in Frankfurt this month will be quarantined in a government facility for 21 days after three pilots on cargo flights from the German city tested positive. On Thursday, Cathay said it had fired the individuals involved for a “serious breach” during their layover and as a result, was requesting “the government to review the decision to place certain groups into quarantine.”

The union said the incident led to the quarantining of more than 200 Cathay pilots and crew members at Penny’s Bay, a government-run camp near Hong Kong Disneyland where people must remain locked in small, spartan rooms for the duration of their confinement. The union declined to comment Thursday on the pilots’ sacking or the letter.

The dramatic response and sudden isolation of so many colleagues have caused morale at the airline to plunge, according to people familiar with the situation. The number of pilots handing in their notice could stretch into the hundreds, the people said.

Pilots, many of whom are expatriates, have also reported being spat upon and otherwise targeted for abuse by Hong Kongers concerned that airline employees may seed cases of the virus, according to the union. “The public view appears to be that we are the equivalent of rats during the Great Plague,” the letter said.

A spokesperson for Cathay said the airline is “doing all we can to help everyone affected,” including bringing in electrical appliances, amenities, and additional food supplies to those interned at Penny’s Bay. Beyond that, the airline is “exploring options and seeking expressions of interest from pilots to participate in temporary extended roster patterns which involve a series of duties from outside of Hong Kong.”

It also acknowledged the importance of cargo to the airline, saying “we are trying our best to maintain our cargo network as much as we can.” On Wednesday, traffic figures for October pointed to an exceptionally strong cargo season for Cathay, one that’s “led to a positive impact on operating cash burn.” Cathay lost HK$21.6 billion (US$2.8 billion) last year, and the airline last week warned that tighter crew curbs by the government could disrupt the supply of goods moving in and out of the city.

The Frankfurt incident also prompted Cathay to introduce additional anti-Covid measures for crew returning to Hong Kong who are not subject to self-isolation or quarantine orders. They included an edict to remain at home for three days after returning from a trip other than for essential activities, which should be limited to two hours a day, keeping a log of all locations visited and carrying out rapid antigen tests daily. Cathay already has a vaccine mandate for all crew members and is requiring them to get boosters by the end of April.

Ironically, the measures come as Hong Kong enjoys one of its longest periods since the pandemic began without community cases or significant virus spread. The city is yet to have a local delta outbreak.

The quarantine regime, which requires residents coming from places like the U.S. to isolate in a hotel for up to 21 days, is being increasingly criticized as unnecessary and outdated, as the world starts to treat Covid as endemic. Hong Kong and China are the last holdouts of the so-called Covid Zero approach, which worked well at eliminating cases in the first year of the pandemic but has been abandoned by places like Singapore and Australia because it’s almost impossible to maintain against the more contagious delta variant.

“It’s a strategy borne out of a desire and belief that they can curb the virus if they pursue such an approach,” said Shukor Yusof, founder of aviation consulting firm Endau Analytics. “I think there’s also an indirect desire to show the world they’re able to not have any infections on a daily basis. It’s been fairly successful, but the question is whether it makes sense for them to continue and for how long, because this is a financial center.”

Almost half of the major international banks and asset managers in Hong Kong are contemplating moving staff or functions out of the city, a survey last month by the Asia Securities Industry & Financial Markets Association, the top lobby group for financial firms in Hong Kong, found. An American Chamber of Commerce in Hong Kong survey released in May found more than 40 percent of respondents were considering leaving the city amid concerns about the Covid policies and crackdown on political dissent.

Back at Cathay, the response to the three positive cases has created a sense of victimization among pilots. Those Bloomberg spoke to requested anonymity because they worry that speaking out could lead to disciplinary action from the airline or prosecution by police using the National Security Law imposed in Hong Kong last year.

The measures are no longer about containing the virus, one Cathay pilot said. Crew either do what they’re instructed or leave, and a high number of pilots are eyeing the door, another said.
#covid 19  #vaccine  #covid
Add Comment