The city’s fourth chief executive looks set to bring her time in office full circle by opening the Hong Kong Palace Museum next month. She leaves with many issues still unresolved, though, and she is frank about the obstacles her successor will have to overcome.

Chief Executive Carrie Lam Cheng Yuet-ngor had her last question and answer session in the Legislative Council last week. If not for the current 90-member-strong, patriots-only chamber, it would not have been a good occasion for Lam to say her piece.

Lam was given the opportunity to set the tone, and she took it. She declared she had delivered a report card that she did not regret and put down a “perfect full stop” for her 40-year public service career.

By a “perfect full stop”, Lam is most likely referring to the opening of the Hong Kong Palace Museum. She revealed that her government and Beijing’s culture ministry will host the opening ceremony as part of the festivities around the 25th anniversary of the handover.

It is symbolic since Lam came under intense political fire for having signed a deal with Beijing for the plans for the museum when she was chief secretary and served as the chair of the West Kowloon Cultural District Authority. A month before Lam announced her run for the top post, she unveiled the museum plans that came about without any public consultation.

It wasn’t Lam’s intention, but it was her departing controversy – rather than a final gift – as chief secretary. To finally be able to open the museum before her departure as chief executive does seem like a perfect and poetic note on which to end.

But not all loose ends can be tied up neatly like the museum, and Lam was refreshingly frank about that in her last Q&A session. Among the many issues Lam will hand over to Chief Executive-elect John Lee Ka-chiu is the resumption of cross-border travel with the mainland. 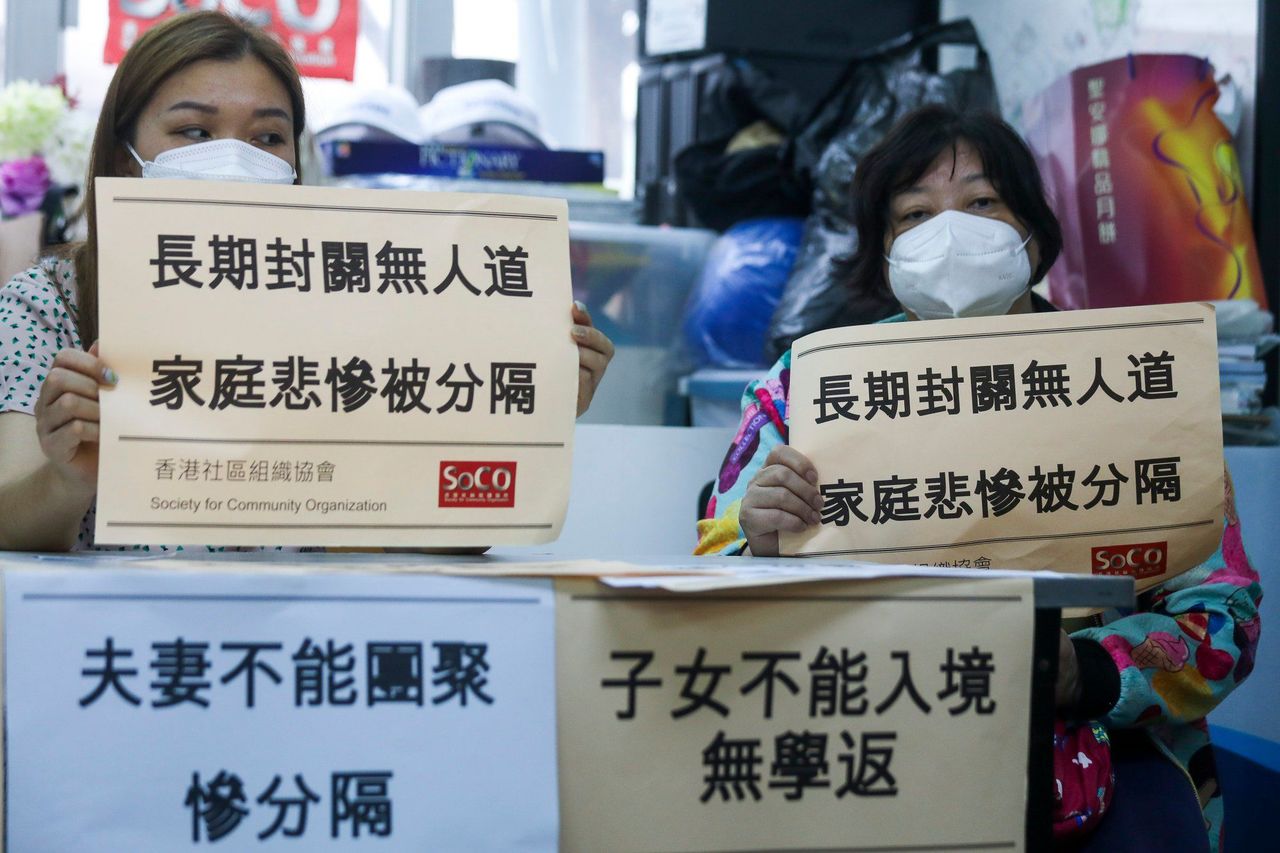 At a rally organised by the Society for Community Organisation on May 15, protesters call on the government to reopen Hong Kong’s borders with the mainland.

Lam had sobering words for Lee to hopefully take to heart. Hong Kong is “caught in the middle” of two worlds, divided by different sets of theories and anti-Covid measures.

Lam said the prospects of the reopening of the border, should we continue to adhere to the “zero-Covid” basis for discussions the Hong Kong government had with its mainland counterpart last year, are grim. She saw no chance for that to happen in the near future.

Beijing should take heed, too. Lam has no reason to step on any toes during her last days in office. In fact, she took time out of her session to extol the “four adherings” from the speech President Xi Jinping made at her swearing-in as her guide in facing challenges during her term.

The people of Hong Kong have felt the impact of stringent quarantine measures and being unable to cross the mainland border. Hong Kong recently retained its title as the world’s most expensive city for expatriates to live in for the third year in a row, according to the ECA International cost of living survey.

Our high cost of living and tough pandemic control measures have pushed foreign talent out of the city. The impact of these measures on foreign investments is something the mainland is feeling as well.

Even before the pandemic, Hong Kong was stuck between a rock and a hard place. It is struggling to find its place in relation to the rest of the world given the rapid speed of the nation’s development and in the context of increasingly complex geopolitics of the region and world. 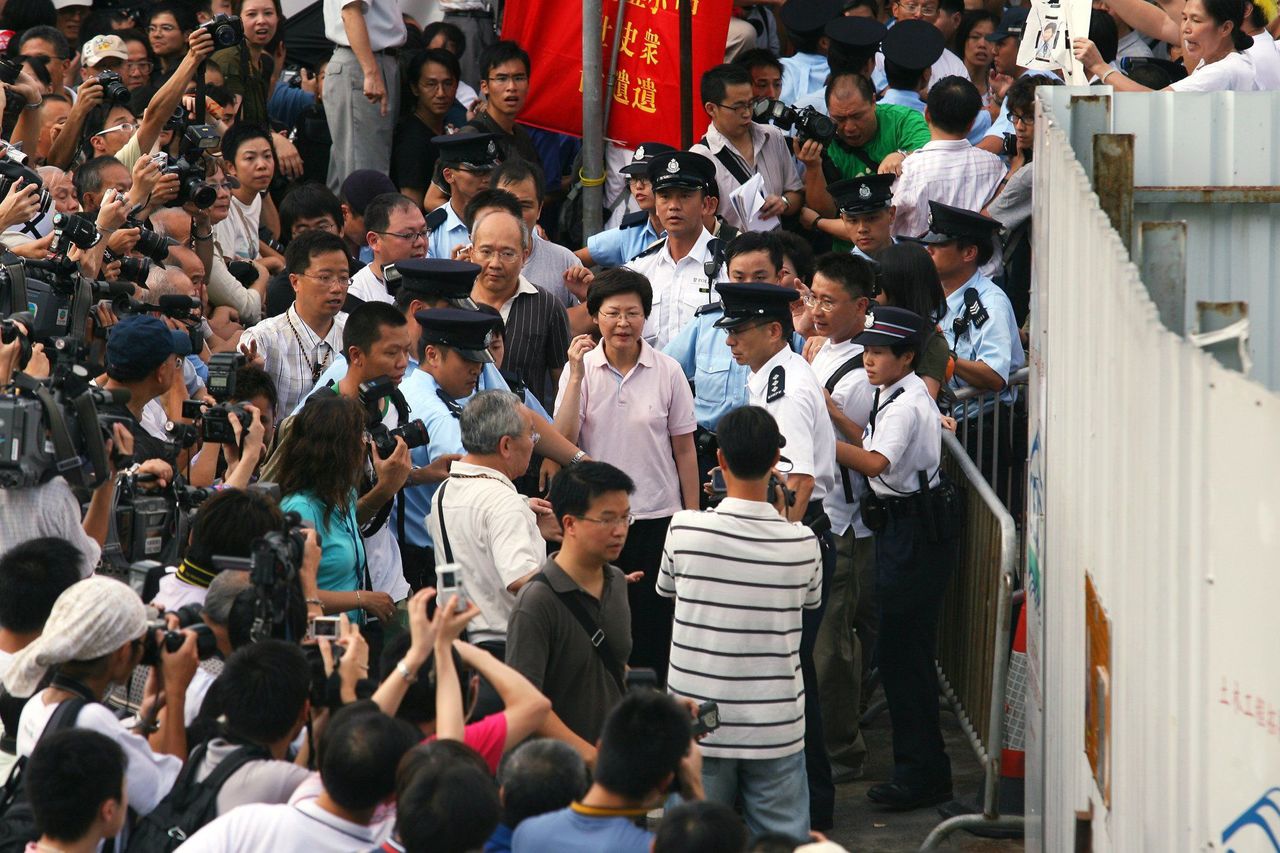 Police provide an escort for Secretary for Development Carrie Lam Cheng Yuet-ngor as she leaves Queen’s Pier after attending two forums in Central on July 29, 2007.

The former head prefect at a Catholic girls’ school still strives to make the grade. Lam has come a long way since she wept over not topping her class in secondary school for the first time in her 13 years as a pre-tertiary student. As we look back at the last five years of her being the ultimate prefect for this city, Lam has definitely made her mark.

Political veteran Regina Ip called Lam’s tenure the “hardest among all four chief executives” and recognised Lam’s dedication in spite of the immense pressure she faced, and we have to agree that it is worthy of respect. Having earned the reputation as a fighter over her role in the demolition of Queen’s Pier, Lam did tough it out until the end.