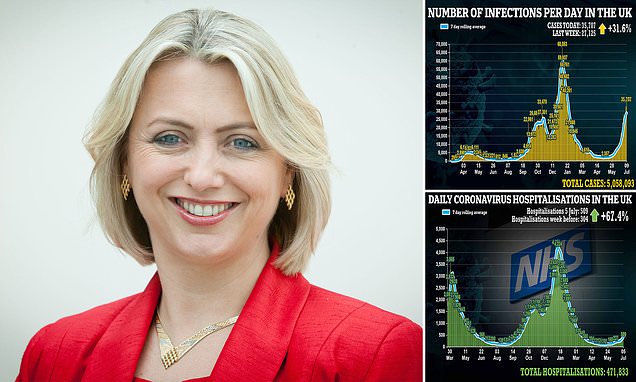 Britain should NOT return to normal on July 19, says medical chief

Chair of the Academy of Medical Royal Colleges Professor Helen Stokes-Lampard said it would be 'dangerous' to 'throw away all the precautions' on England's Freedom Day in just over a week's time.

Britain should not return to normal on July 19 because a 15-month NHS backlog combined with a third wave of cases is putting doctors under pressure, a medical chief has warned.

Chair of the Academy of Medical Royal Colleges Professor Helen Jayne Stokes-Lampard said it would be 'dangerous' to 'throw away all the precautions' on Freedom Day in just over a week's time.

The academic also urged the public to be aware that the Covid-19 pandemic is 'far from over' and to take a 'responsible approach' when restrictions are eased.

It follows SAGE advisers saying that Covid cases in England will 'plateau and then fall' within weeks with vaccines, natural immunity, seasonality and behaviour change driving the outbreak down.

The claim – unveiled in a tranche of documents published yesterday – came amid fears infections will continue to spiral over the coming weeks, with England's progress to the final of Euro 2020 blamed on a surge in cases.

Meanwhile, in fresh documents it emerged that modelling produced by the government's SAGE modelling committee Spi-M miscalculated hospital admissions by over a third.

Estimates on June 28 predicted approximately 275 daily admissions by around July 6 when in reality there were 461 people admitted on July 7, reports The Times.

Boris Johnson is expected to 'tone down the Freedom Day rhetoric' and urge the public to behave sensibly while confirming the July 19 reopening on Monday. 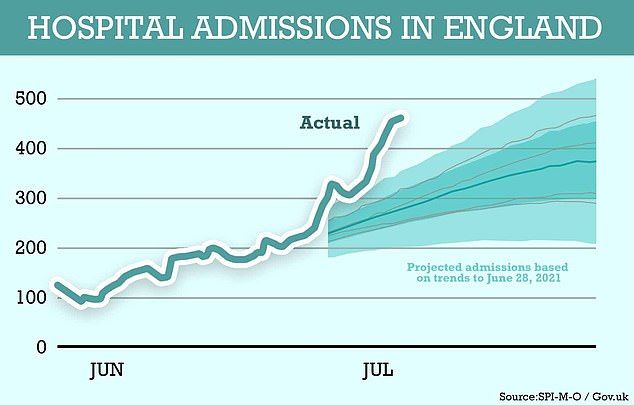 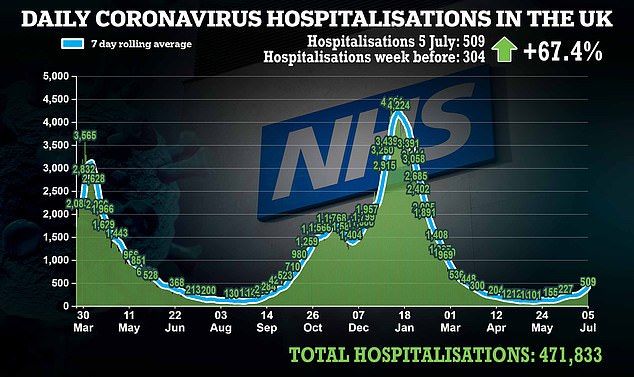 Covid hospital admissions breached 500 for the first time since mid-March. Professor Stokes-Lampard said: 'It feels in hospitals and GP surgeries like the middle of winter'

Speaking this morning, Professor Stokes-Lampard told BBC Radio 4's Today Programme: 'I have been profoundly concerned for a week or two since talk of July 19 is ramping up.

'There seems to be a misapprehension that life will return to normal from then and that we can throw away all the precautions, and frankly that would be dangerous.

'We all want to make sure that the public is aware that this pandemic is far from over. And that when the 19th comes we need a responsible approach and a very cautious approach to relaxing restrictions.

'We've heard some pretty alarming reports of companies saying 'all restrictions are removed, everyone back in the office , sitting close to each other, no masks indoors.

'And I do feel that is going to add fuel to the fire of this current quite dangerous wave that we're in.'

The rate of new cases of coronavirus in most areas of England is now back at levels last seen during the winter.

Patient numbers have risen to levels last seen around three months ago.

And there has been a very slight increase in the average number of deaths reported each day of people in England who died within 28 days of testing positive for Covid-19.

But this is still far below the sort of numbers seen in January and February of this year.

The academic continued: 'The previous waves were high pressured in a different way. What we've got at the moment is we're dealing with the backlog that's built up over the last 15 months. We all know the record number of people waiting for operations and for investigations.

'And also we're seeing a sudden spike in the number of young children requiring hospital attention and people having infections that they didn't have before.'

The Chair of the National Academy for Social Prescribing added: 'It feels in hospitals and GP surgeries like the middle of winter with how busy we are. Rather than July, when we would normally see a low number of infections.

'[Staffing] is a massive problem we're seeing now. Partly because of the number of children who've been sent home from school and are isolating. The infection is running rife in young people. That inevitably means that healthcare workers are having to self-isolate following national guidance.

'But that means that the rest of the staff are under increasing pressure. And we're seeing hospitals cancelling operations, cutting back. We're seeing GP surgeries starting to cut back again on the more routine services they provide.' 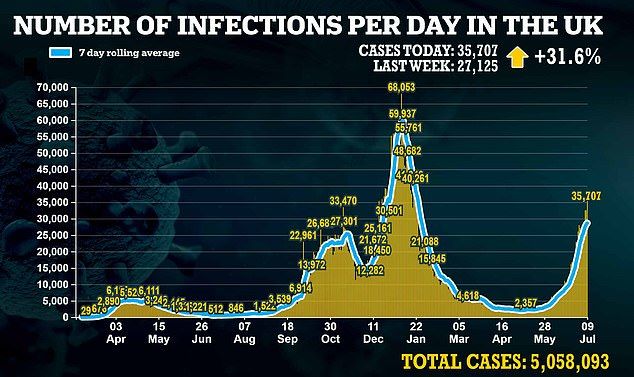 The latest UK daily figures show 35,707 tested positive for the virus - a seven month high. It came amid fears infections will continue to spiral over the coming weeks, with England's progress to the final of Euro 2020 blamed on a surge in cases 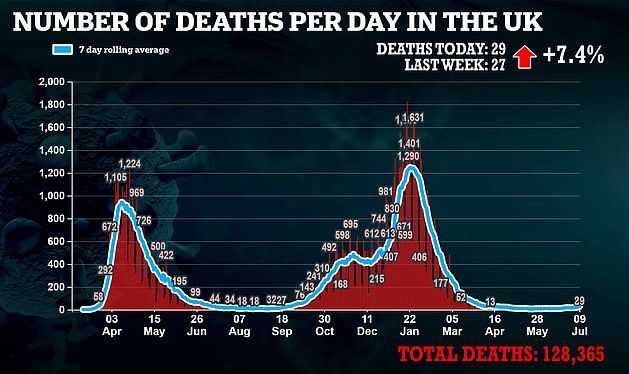 In the last week, 176 people died with the virus within 28 days of a positive test. The academic said: 'We all want to make sure that the public is aware that this pandemic is far from over'

SAGE member Dr Mike Tildesley also said higher cases 'challenge the virus' and give it the opportunity to mutate into a form which could make vaccines less effective.

He told Times Radio: 'We need to be careful. We can't just say once we've broken the link between cases and hospital admissions that we are pretty much safe and no-one gets really sick so it's fine to have a big wave of cases.

'Of course the more cases you have, particularly with high levels of vaccine protection, that does then kind of challenge the virus a little bit more and gives more potential for it to mutate into a form where the vaccines are less effective.'

Asked about so-called vaccine passports for entry to pubs, restaurants, and nightclubs, he said there is a danger of 'potentially marginalising members of society who maybe don't have access to the vaccine that others do'.

The Academy of Medical Royal Colleges said in a statement: 'There is little doubt that things will get worse before they get better.'

It follows several sources telling the Guardian that the government is most likely to go ahead with the easing of restrictions in just over a week's time, but will tone down the 'Freedom Day' rhetoric.

Two Whitehall insiders said internal polling had sparked concern amongst ministers, but one source added that it would be 'political suicide' to U-turn.

It was also admitted that despite the Prime Minister's warning to the public not to be 'demob happy' at a news briefing last Monday, the message became 'slightly lost' amid the announcement of restrictions being eased.

No 10 suggested on Friday that NHS staff could be made exempt from self-isolation if they are 'pinged' by the Covid app in order to help workforce levels.

Prof Stokes-Lampard said it sounded like 'a sensible next step'.

Chris Hopson, chief executive of NHS Providers, welcomed the idea of an exemption and suggested another option would be to bring forward, for NHS staff, the August 16 date from which the Government has proposed to end all quarantine for the double-jabbed who get a negative PCR test result.

Mr Hopson said: 'Having spoken to trust leaders, we concluded that, given the current severe impact on service delivery, it is right for the Government to review their current proposed approach on self-isolation as it affects NHS staff. We are pleased that they are listening carefully to these concerns.

'It's important to remember that nearly all NHS staff have been vaccinated and that they were amongst the first groups to receive vaccinations. There are therefore various options available here.'

'Sajid Javid has no plan to support NHS staff through the summer. Their only response is to talk about removing the batteries from the smoke alarm by watering down the NHS app and looking at ID cards for pubs. 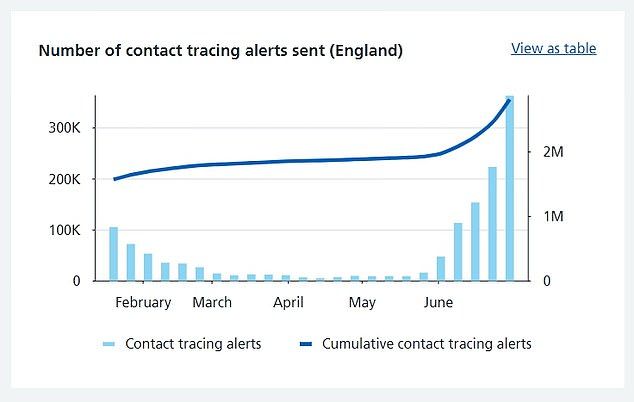 The NHS Covid app issued more than 350,000 pings last week, which was the most since the Government began publishing data at the start of February 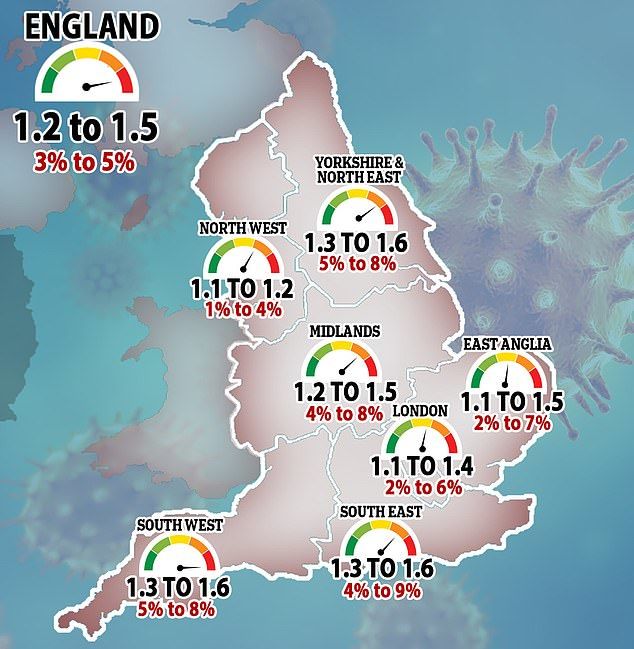 England's Covid R rate may now be as high as 1.5 — the highest it has been since the second wave spiralled out of control in October, Government scientists have announced 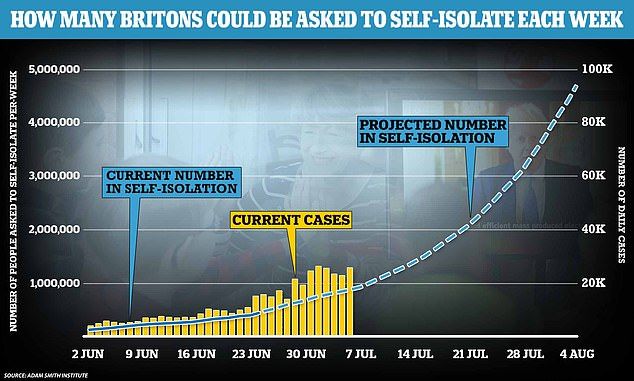 'Boris Johnson's recklessness in throwing all caution to the wind is creating a summer of chaos.'

Meanwhile, an expert said yesterday that football fans celebrating the Euros in the UK may have been 'an important factor' in driving up coronavirus case numbers.

Data from England, Scotland and Wales shows an 'obvious surge' in case numbers starting around 10 days after the first games involving each nation, according to Paul Hunter, professor in medicine at the University of East Anglia.

He said it also showed that case numbers had begun to decline in all three countries though this was most noticeable in Wales and Scotland, both of whose teams are no longer in the tournament.

Prof Hunter said it was 'difficult to escape the conclusion' that revelling fans had not contributed to the rising numbers of cases.

He said: 'It is very clear that in all three home countries the week on week rate of increase in case numbers was slowing and it did look like we may be seeing case numbers plateauing.

'But in all three countries England, Scotland and Wales there was an obvious surge in case numbers starting about 10 days after that country's first match in the Euros.

'Whilst association does not necessarily mean causation it is difficult to escape the conclusion that celebrations around the Euros have been an important factor in driving up the epidemic in the UK.'

However, SAGE's latest viewpoint has offered one of the clearest signs yet that ministers won't budge on going ahead with Freedom Day on July 19.

Boris Johnson and senior colleagues in Government are still reviewing the data and advice given to them about the final unlocking. Scientists, including Professor Chris Whitty himself, have already rolled the pitch for the remaining laws to be dropped in two weeks' time.

Health chiefs are said to have dubbed England's post-Freedom Day strategy 'hybrid immunity', a play on the controversial herd immunity tactic that was touted at the beginning of the pandemic. 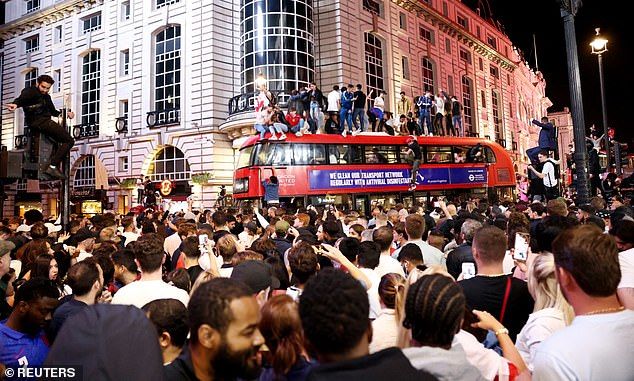 It follows an expert saying that football fans celebrating the Euros in the UK may have been 'an important factor' in driving up coronavirus case numbers (pictured: chaotic scenes in Piccadilly Circus after England's victory over Denmark) 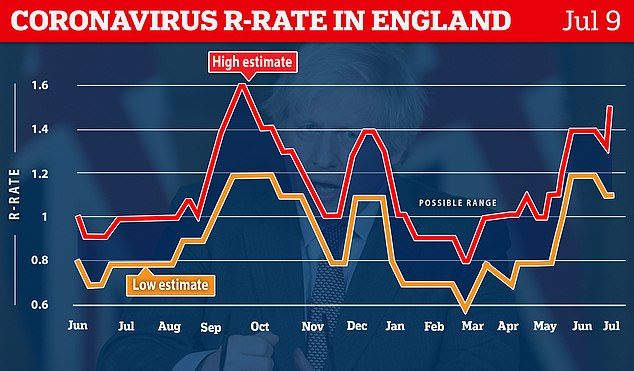 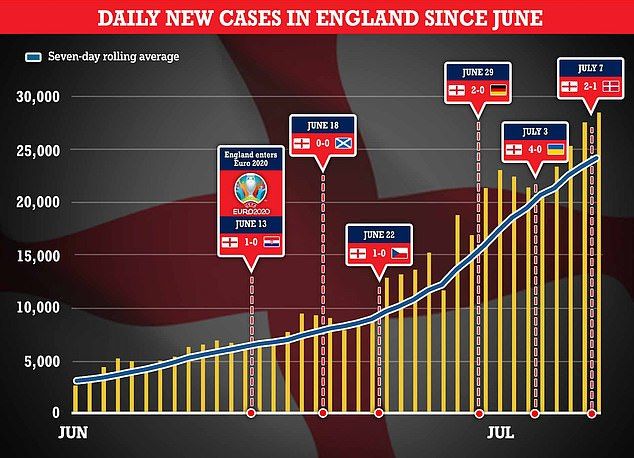 It would see the older and vulnerable population - who will be fully vaccinated by July 19 - enjoy protection through the jab programme while the young get immunity from natural infection.

SAGE advisers said it was 'very difficult' to predict when cases will begin falling in the country.

Outbreaks will plateau at different times in different regions, they wrote in one of the documents submitted on June 23.

The full scientific paper read: 'At some point in the future, the number of cases in England will plateau and then start to fall as a result of vaccination, natural immunity, seasonality, and behaviour change.

'It's very difficult to determine in advance the precise date at which this will occur.

'It's likely it will happen at different times in different parts of the country, depending on local levels of immunity and behaviours.'