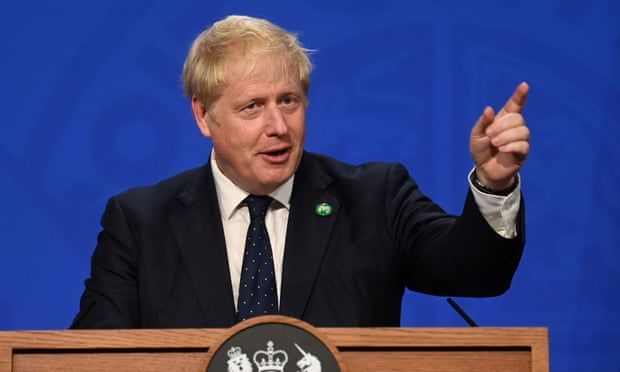 Boris Johnson is to confirm the start of a booster jabs programme for the over-50s on Tuesday after government scientists finally approved vaccinations for older schoolchildren.

Setting out a widespread acceleration of the vaccine programme before what ministers concede will be a difficult second winter coping with the virus, the prime minister will also signal his opposition to any further lockdowns this year.

In a press conference on Tuesday afternoon, the prime minister will highlight the need to keep some measures in reserve, which could include a return to compulsory mask-wearing in some settings, telling people to work from home where possible and the reintroduction of social distancing across England.

But he will put the vaccination programme at the heart of his approach to trying to keep Covid hospitalisations and deaths at manageable levels during the colder months when people are more likely to gather indoors and in the run-up to Christmas.

However the plans to offer jabs to children aged 12 to 15, approved by the UK’s four chief medical officers on Monday, immediately provoked concern from teaching unions who warned that schools were being put in an “invidious” position.

They called on ministers to confirm the programme would be overseen by specialists so teachers would not become caught up in issues of consent, or having to deal with anger from anti-vaccination groups.

One NHS trust has told schools it expects the first injections to be completed within six weeks.

Paul Whiteman, general secretary of the National Association of Head Teachers, said: “It is essential that the government immediately confirms that the process surrounding vaccinations will be run and overseen entirely by the appropriate medical teams.”

The Joint Committee on Vaccination and Immunisation (JCVI) is now understood to have endorsed boosters to be given to all over-50s and the clinically vulnerable, given fears about waning immunity.

The rollout is expected to take the same form as the first phase of Covid vaccine distribution begun in December 2020, with the oldest prioritised first before jabs are offered to the lower age groups. 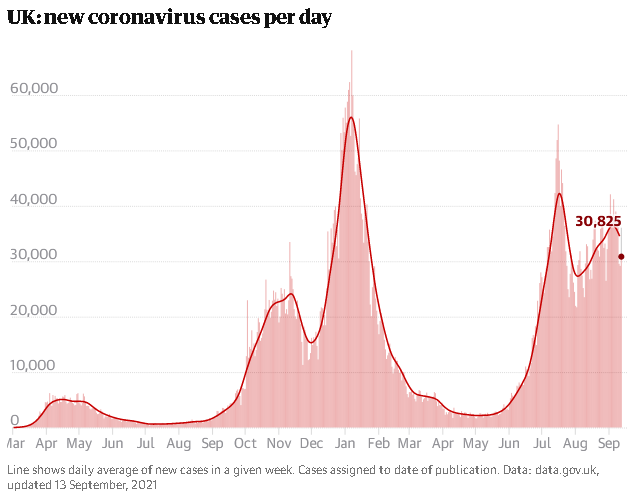 Sajid Javid, the health secretary, will make a statement to the Commons confirming the move, with Johnson fielding questions from the media in a press conference later in the afternoon.

The prime minister will say: “The pandemic is far from over but, thanks to our phenomenal vaccine programme, new treatments and testing we are able to live with the virus without significant restrictions on our freedoms.

“Today I will set out a clear plan for the autumn and winter, when the virus has a natural advantage, to protect the gains we have made.”

Although ministers are expected to relinquish some emergency Covid powers, the government will still retain the ability to enforce a lockdown and tell people to quarantine who test positive.

And despite announcing over the summer that vaccine passports will be required for entry to nightclubs and other large crowded venues, Johnson is also expected to confirm what Javid said on Sunday – that the controversial documents will not be introduced on 1 October. However, the policy will be kept in reserve, much to the frustration of dozens of Tory MPs, who were preparing to vote against such a move to kill it off.

Many privately thought the chances of legislation passing to introduce vaccine passports were slim, given the high level of opposition among Johnson’s own backbenchers, and have told the Guardian the government should rule out their introduction entirely. One said: “The very concept of vaccine passports needs to be ruled out for good, as they are fundamentally unconservative, discriminatory and would lead to a two-tier society that I am confident no one actually wants to see.”

Johnson’s “winter plan” will prepare people for what Labour have warned could be “the worst winter in living memory” for the NHS, with the dual pressures of Covid and flu expected to place even more strain on the health service.

A government insider said that to guard against another lockdown, the prime minister would announce the potential return of “the sorts of interventions we’ve seen before”. They added: “It’s just the choice of in what combination and at what level of cases, deaths and hospitalisations they could be triggered”.

The decision on boosters has become one of the most protracted and complex issues the JCVI has tackled during the pandemic, with significant debate over whether any extra immunity granted by mass third jabs brings a net public health benefit, given the resources involved and the potential impact on areas such as other vaccination programmes.

On Thursday last week the committee held a meeting on the issue which lasted more than four hours, with members given very strict warnings against speaking to the media.

While the JCVI was deciding, there was increasing, if implicit, pressure from ministers to agree to a widespread booster programme, with ministers ordering the NHS to prepare for an immediate rollout once agreement was reached.

Some politicians and scientists, including Sir Jeremy Farrar, the director of the Wellcome Trust, have also stressed it would be unfair for the UK to roll out booster vaccines while millions of people in poorer countries still do not have access to even a first jab, and warned this could lead to the creation of potentially new variants of concern.

Announcements on rules for international travel are not expected to be made tomorrow but could come as early as Thursday.

The red, amber and green lists are expected to be replaced with a “go” and “no go” list of countries, acquiescing to Labour’s longstanding call for a simpler two-tier system.

Sources said there was a deliberate nudge built into the plan that would encourage people to get vaccinated by scrapping the requirement to quarantine and get a PCR test for those returning from “go” places but potentially keeping it in place for those who are not fully inoculated.

There were 30,825 new Covid cases announced on Monday and 61 deaths – lower than the recent daily figures because of the weekend reporting lag.