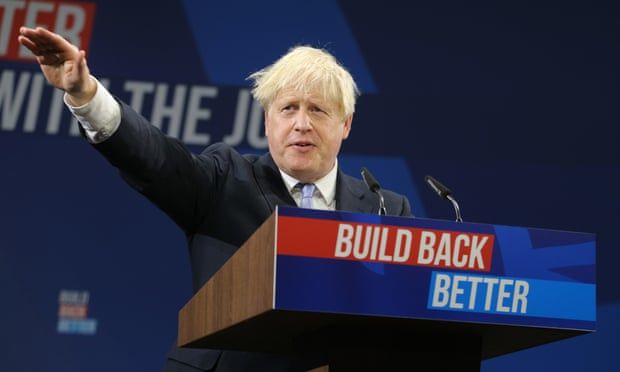 Boris Johnson’s conference speech: what he said and what he meant

Boris Johnson let the bombast flow as he delivered a speech designed to buoy Tory activists despite their nerves about the forthcoming national insurance increase and the risk of dangerously high levels of inflation.

In a specially constructed auditorium, the prime minister announced only one new policy – spending the remainder of his 45-minute address fleshing out in colour and tone how he plans to hold on to the swathes of voters who voted Conservative for the first time at the last election and meandering between some of his other favourite subjects.

This is what he said – and its significance:

"We have one of the most imbalanced societies and lopsided economies of all the richer countries. It is not just that there is a gap between London and the south-east and the rest of the country: there are aching gaps within the regions themselves.”

Johnson knew the pressure was on to start implementing what some Tories say is a nebulous concept that has not been fleshed out in the nearly two years since the last election. He chose not to – given the white paper on levelling up is expected to be produced within months and also mindful of saving some fanfare for the budget and spending review. Unlike the chancellor, Rishi Sunak, who used his speech this week to effusively pay tribute to his Tory predecessors’ management of public finances, Johnson instead took aim at prime ministers over the past few decades – including three Conservatives – in an effort to disassociate himself from their austerity drive, and reinvent the party. Johnson specifically name-checked Buckinghamshire as a region that has been levelled up – a careful choice, given it was home to the Chesham and Amersham constituency where a huge Tory majority was overturned at the byelection in June.

"When this country was sick, our NHS was the nurse. Frontline healthcare workers battled against a new disease, selflessly risking their lives, sacrificing their lives. And it is right that this party – that has looked after the NHS for most of its history – should be the one to rise to the challenge.

The Conservatives have always claimed to be safe stewards of the NHS and Johnson clearly tried to take this narrative further. He understands its salience to Labour voters and wants to be seen to praise it, particularly in the light of Covid. Recalling his own personal experience being hospitalised with Covid in March 2020, Johnson wanted to show he had an emotional connection with one of the nation’s most beloved institutions. However, he sought to manage expectations, also admitting that waiting lists will go up before they come down.

"It has become clear to me that this isn’t just a joke – they really do want to rewrite our national story, starting with Hereward the Woke. We really are at risk of a kind of know-nothing cancel culture, know-nothing iconoclasm. We Conservatives will defend our history and cultural inheritance not because we are proud of everything, but because trying to edit it now is as dishonest as a celebrity trying furtively to change his entry in Wikipedia, and it’s a betrayal of our children’s education.

Johnson threw his supporters some red meat by signalling he was seriously concerned about the creep of culture wars – though seemed to blame the “woke” re-examination of historical figures for this, rather than allies on his own side stoking the flames. Some Conservatives feel that they have a better chance of captivating disaffected former Labour voters by appearing in step with them on social issues – be it statues, trans rights or taking the knee – so Johnson showed he is not afraid to plough this furrow further.

"It was the private sector that made it possible. Behind those vaccines are companies and shareholders and, yes, bankers. You need deep pools of liquidity that are to be found in the City of London. It was capitalism that ensured that we had a vaccine in less than a year and the answer therefore is not to attack the wealth creators, it is to encourage them – because they are responsible for the aggregate increase in the country’s wealth that enables us to make those Pareto improvements.

Aware of the fragile coalition of voters he must hold together – traditional low-tax Tories and newer supporters who want higher public spending – Johnson was at this point speaking to the former. His full-throated defence of capitalism and praise of bankers was meant to encourage wealth creators to stick with the party, and probably help top up its coffers with donations. However, the prime minister’s lavish praise for the private sector in helping produce the AstraZeneca vaccine was notably more restrained than comments he made in private to Tory MPs earlier this year, when he credited “greed”.

"Tired old Labour … Did you watch them last week in Brighton? Hopelessly divided, I thought they looked, their leader like a seriously rattled bus conductor, pushed this way and that … by a Corbynista mob of Sellotape-spectacled sans-culottes. Or the skipper of a cruise liner that has been captured by Somali pirates desperately trying to negotiate a change of course and then changing his mind.

Johnson is most in his element when he’s insulting the opposition – reaching for the most bizarre and colourful metaphor that will leave supportive spectators howling. To keep up the energy in the room, the prime minister reached for ever-more odd descriptions of Keir Starmer. But his more serious intention was to try to brand Starmer as hamstrung by his party and therefore unreliable on policy – subject to the whims of divided Labour members.

"When I became leader of this party, there were only – can you remember what percentage of households had gigabit broadband when you were so kind as to make me leader? Only 7%. And by the new year that will be up to 68%. Thanks to Rishi’s super-deduction, the pace is now accelerating massively as companies thrust the fibre-optic vermicelli in the most hard-to-reach places.

The single most important message Johnson wanted to hammer home was that the government has been delivering on pledges made in 2019, despite the obvious distraction of dealing with Covid. Tories are restless when it comes to the rollout of gigabit broadband – aware that in an increasingly digital age, the difference in internet speed significantly holds back some parts of the country more than others. Pointing to the success that has been achieved in bringing that gap was one of the key ways Johnson tried to demonstrate ministers were – in the words of the conference’s slogan – “getting on with the job”.

"Does anyone seriously imagine that we should not now be raising the funding to sort this out? Is that really the view of responsible Conservatives? I can tell you something – Margaret Thatcher would not have ignored this meteorite that has just crashed through the public finances. She would have wagged her finger and said more borrowing now is just higher interest rates and even higher taxes later.

Citing the former prime minister Margaret Thatcher is usually a guaranteed way at Conservative conference to get a rip-roaring round of applause, and Johnson reached for that to try to defend raising national insurance to pay for getting through the NHS backlog and social care. Despite professing himself to be a low-tax Tory, Johnson knows many of his MPs believe he has abandoned “Conservatism” – so what better way to try to paper over that than by invoking Thatcher, who redefined the term herself?