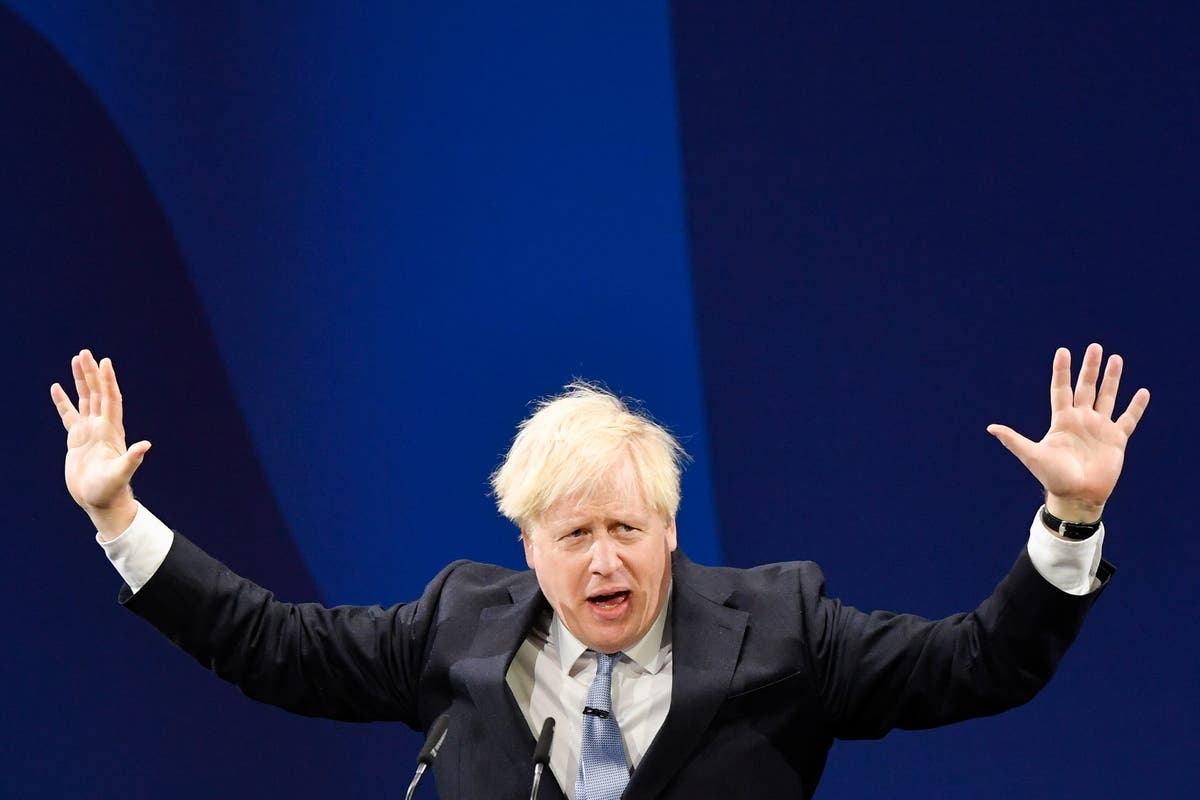 Boris Johnson vowed to “unleash the spirit” of Britain as he put the Conservatives on a mission to revolutionise the economy which could secure him another term in Downing Street.

He injected fresh momentum into his “levelling up” agenda as he seeks to reshape the UK into a “high pay, high skill and high productivity” economy.

In his first in-person keynote speech to the Tory conference in two years, the Prime Minister stressed that people should be judged by “the spirit inside them”. He said: “That is the spirit that is the same across this country in every town and village. That can be found in the hearts and minds of kids growing up everywhere. That is the spirit we are going to unleash.”

However, his speech came as the country faces a series of crises including petrol shortages still blighting London, soaring fuel bills for millions of households, supermarkets and other retailers warning of shortages at Christmas, and French fishermen threatening to blockade the Channel Tunnel in a row over fishing licences.

Mr Johnson is being seen as the “king” of his party after his recent reshuffle to promote optimistic loyalists.

He criticised “decades of drift and dither” under previous Conservative leaders and trumpeted his Government as “reforming”.

But he referred to former prime minister Lady Thatcher as he defended tax rises that are deeply unpopular with many Tories. “Margaret Thatcher would not have ignored this meteorite that has just crashed through the public finances,” he said. “She would have wagged her finger and said that more borrowing now is just higher interest rates and even higher taxes later.”

After Britain’s departure from the European Union and with labour market shortages now hitting key parts of the economy as the UK emerges from the Covid pandemic, Mr Johnson stressed that he wanted to build a “high wage, high skill and high productivity” nation.

He told party faithful gathered in Manchester: “We are not going back to the same old broken model with low wages, low growth, low skills and low productivity, all of it enabled and assisted by uncontrolled immigration.”

However, he admitted the reforms could “take time” and “will sometimes be difficult”.

There is also disquiet among some Tory MPs that ideology, and allowing the market to fix problems, means the Government is not responding with sufficient urgency to immediate labour shortages.

However, Mr Johnson said: “The answer is not to reach for the same old lever of uncontrolled migration to keep wages low.”

Some ministers, though, are concerned that wages could spark a spiral of inflation if there is no improvement in productivity, as has been the case in the UK for many years. The PM’s speech was light on new policies but announced a £3,000 “levelling-up” premium for teachers.

After the divisions of Brexit, Mr Johnson claimed that he was now on “the greatest project that any government can embark on” which was “uniting and levelling up across the UK”.

However, his speech came on the day that the £20-a-week uplift in Universal Credit, temporarily introduced during the pandemic, is being axed, with warnings that this will undermine efforts to level up.

However, the Government is expected to increase the “national living wage” to about £9.42 an hour.

Mr Johnson also argued that Londoners and other people living in the wider South-East would benefit from the “levelling-up” agenda, rather than just some constituencies like those former Labour “Red Wall” seats won by the Tories in 2019.

Many Tories are unhappy about the Government raising the tax burden to the highest sustained level ever, according to experts, with the rise in National Insurance contributions in the spring, Corporation Tax increased and freezing of the thresholds for different income tax rates.

Mr Johnson is banking on his “boosterist” approach, injecting optimism into the Government and country, combined with taking a limited number of bold decisions on key issues such as pay and social care, to cut through to voters and hold together the coalition of support that swept him into No 10 in 2019.

“After decades of drift and dither this reforming government, this can-do government that got Brexit done, is getting the vaccine rollout done and is going to get social care done.”

Critics including some Tory MPs say the billions earmarked to tackle the social care crisis may be swallowed up by the NHS as it deals with backlogs and the ongoing Covid situation, and will also not be enough given the scale of the support needed for a growing number of people in their old age.

Significantly, ministers have not ruled out council tax increasing to raise more funds for social care.

Mr Johnson, though, stressed: “We are dealing with the biggest underlying issues of our economy and society.

“The problems that no government has had the guts to tackle before.”

Mr Johnson has become embroiled in a blame game with business over the cause of a supply chain crisis which has triggered fuel shortages across the country and empty shelves in some supermarkets.

The Prime Minister has accused businesses of being over-reliant on cheap, foreign labour and urged them to improve pay and conditions to address shortages in critical sectors from haulage to farming and food production.

But the hostile approach — coming on the back of tax rises — has risked further damage to the already fragile relationship between Mr Johnson’s Government and big business leaders, many of whom were anti-Brexit.

The tone of the messaging emerging from this week’s conference in Manchester has also left some Conservatives questioning whether the party can still claim to be the party of business.