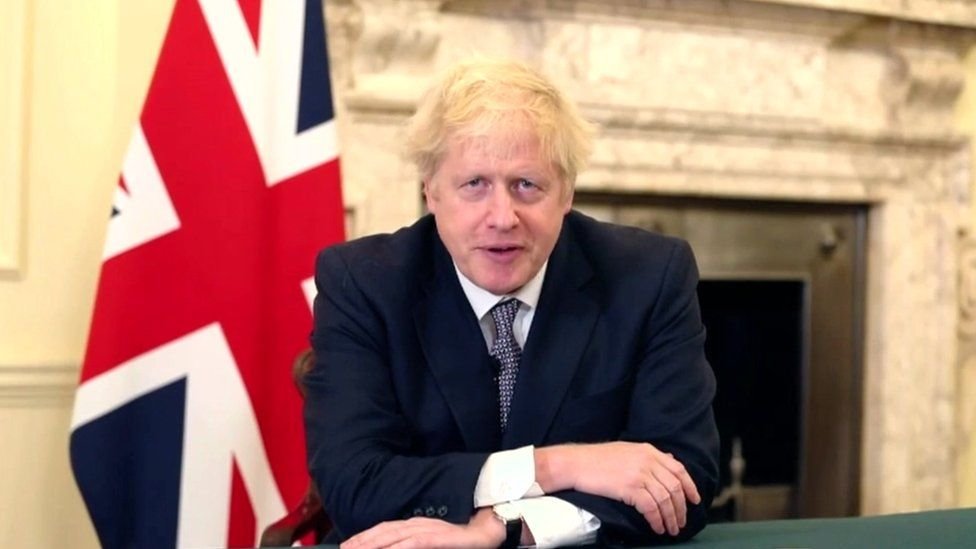 Boris Johnson has insisted he does not oppose devolution, after reportedly saying it had been a "disaster" in Scotland.

Addressing Scottish Conservatives, the prime minister said he only "criticised the performance of devolution" under the Scottish National Party.

"I don't want to oppose devolution as a concept in itself," he said.

The SNP said these were "weasel words" to deflect from his earlier "blunder".

In a speech by video link to the party's conference, Mr Johnson said reports he had told Tory MPs devolution was a "disaster" and "Tony Blair's biggest mistake" had not reflected his words "entirely accurately".

"The way SNP have handled devolution in Scotland has been a disaster," he said, criticising the party's performance on education along with people's satisfaction with public services and describing it as an "abysmal record".

He cited his experience as mayor of London as an example of his support for devolution, saying it could help deliver green transport policies or in tackling crime.

"Devolution should be used not by politicians as a wall to sequester, to break away, an area of the UK from the rest," Mr Johnson said.

"It should be used as a step to pass power to local communities and businesses to make their lives better. It's that kind of localism which I believe in and want to take further."

'The PM is trying to repair some of the damage'

Boris Johnson is said to have told a group of Tory MPs on Monday that devolution had been a disaster in Scotland. No 10 didn't deny those were his words.

They went down badly with Mr Johnson's colleagues in Scotland - to put it lightly.

Mr Johnson is now trying to repair some of the damage by saying he has no problem with devolution, just the SNP.

The problem for Mr Johnson is that the SNP and Labour have already made his comments on devolution a key message ahead of the Holyrood elections in May. Those elections could be crucial in deciding whether there is going to be another independence referendum.

He said the coronavirus crisis showed how important it was for the nations of the UK to work together, adding that there was no time for "division and distraction" and the "focus on separation has got to stop".

Thanking First Minister Nicola Sturgeon for her co-operation, he said Scotland had benefited from being part of "one of the world's leading scientific superpowers" during the pandemic, with vaccine stocks, testing and other technologies.

The jobs of more than 900,000 Scottish workers were protected by the furlough scheme and 80,000 businesses were given government grants or loans, the prime minister said.

"Covid-19 doesn't care about constitutional arrangements," Mr Johnson added. "We all need to work together to protect health and jobs of the people of Scotland."

Devolution is the name for the way powers once held by the government in Westminster have been passed to elected bodies in Scotland, Wales and Northern Ireland.

Devolved powers include health, housing, fire services, some areas of transport and education. However, Scotland has always had its own education system and a separate legal system.

The UK government, based in London, has kept many powers, such as defence, foreign policy and most forms of tax.

Public votes about devolution were held in 1997 in Scotland and Wales, and in both parts of Ireland in 1998, as part of the Good Friday Agreement. It led to the creation of the Scottish Parliament, the National Assembly for Wales and the Northern Ireland Assembly.

Some parts of England have directly-elected mayors, who also have devolved powers. The mayor of London, for example, is responsible for transport and policing in the capital.

An SNP spokesman said the prime minister was just offering "more weasel words of deflection from his blunder in revealing he thinks devolution has been a disaster".

Elections for the Scottish Parliament take place in May. The SNP is currently the largest party with 61 MSPs and the Conservative Party is the second largest with 31 - eight seats ahead of Labour.

Ms Sturgeon's SNP says a second referendum on independence - following Scotland's vote against it in 2014 - should be held if her party wins. But Mr Johnson has ruled this out.

Boris Johnson says he does not oppose devolution