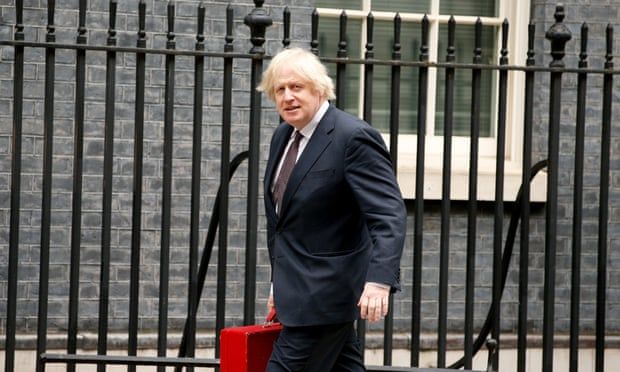 Boris Johnson branded irresponsible over ‘back to the office’ call

Boris Johnson has sparked new controversy over when employees should return to their workplaces by suggesting people have had enough “days off” at home during the pandemic, and should try to go back to their offices.

The prime minister’s comments – which followed remarks from the chancellor, Rishi Sunak, urging companies to reopen offices when the pandemic eases or risk losing staff – caused alarm among scientists, and were branded by Labour as “irresponsible” and “glaringly inconsistent” with the government’s own route out of lockdown.

They also came as some of the country’s leading recruitment organisations told the Observer that revolutionary changes were inevitable in the world of work after the pandemic, with far more people wanting to work remotely and companies rethinking how to deploy staff most effectively. Experts also predicted a switch to “hybrid working” on a mass scale, meaning the old five-day week model of office work being replaced with more flexible arrangements, such as three days at home and two in the office.

Monday will see further easing of Covid-19 restrictions in England with groups of up to six people, or two families, allowed to socialise outdoors, and outdoor sports permitted. On Saturday Wales became the first UK nation to lift the “stay local” requirement, as unlimited travel was permitted throughout the country.

Johnson and his ministers have not, however, changed official advice which says that people should work from home if possible. The issue is the subject of a government review and no changes are expected in the coming weeks, despite falls in Covid-19 hospital admissions and death rates over recent weeks.

However, when asked at the Conservative party spring conference yesterday whether there should be a special bank holiday when the pandemic subsides, Johnson said people should be thinking more about getting back to work than having more time off. “The general view is people have had quite a few days off, and it wouldn’t be a bad thing for people to see their way round to making a passing stab at getting back into the office,” he said.

Andy McDonald, the shadow employment rights and protections secretary, said Johnson’s remarks could not be passed off as a joke and were deeply irresponsible. “He is trying appease the libertarian wing of his party on the one hand by talking about getting back to the office, then suggesting he is being cautious. He just throws out comments like this. You can’t ride two horses at once. It is not leadership, it is simply cavalier.”

McDonald added that rather than promoting a return to office working as before, the government should be strengthening the right of employees to work from home when possible. “A right to seek flexible and remote working should be matched by a duty on employers to grant such a request so far as is reasonable,” he said. The government has committed to launch a consultation on flexible working which has yet to begin.

Scientists warned that any immediate return to the office would be premature. “At this point, the focus has to be on keeping new daily cases as low as possible, while the vaccination rollout continues,” said Michael Head, senior research fellow in global health at Southampton University. “We know that transmission is higher when people gather indoors for prolonged periods of time. Therefore, people should be encouraged to continue working from home for the foreseeable future.”

Prof Martin Hibberd, of the London School of Hygiene & Tropical Medicine, said the government should stick to a cautious approach and wait until later in the year before allowing anything like a return to normality.

“With infections stabilising and new variants arriving I feel we should be careful. If variant-adapted booster vaccines can arrive in September, and be given on a background of low infection numbers, then I think we will finally be ahead of the virus,” he said.

Last July when the first Covid-19 wave was easing, Johnson also urged people to return to work if they were able to do so, well before official guidance was changed. His remarks at the time were seen by scientists as symptomatic of an over-confidence that allowed a second wave to take hold in the autumn.

With debate intensifying in corporate circles and trade unions over a return to office working, James Reed, chair of Reed, one of Britain’s leading recruitment companies, said the effects of the pandemic on the way people worked would be profound and permanent.

“We are seeing huge changes. There is no doubt from our conversations with employers and the types of jobs being advertised that the pandemic will lead to lasting changes in the way we live and work,” he said.

“While there are some people who believe there will be a rush back to the office across the board, I see no going back to the way we used to live and work. It is only a question of what is going to be the new normal.”

Different companies are adopting very different strategies. Last week the Nationwide building society said it would allow all employees to work remotely, while the investment bank Goldman Sachs said it hoped to have all 34,000 employees based around the world back in the office “as soon as possible”.

Neil Carberry, chief executive of the Recruitment and Employment Confederation said he believed much more “hybrid” working was on the way. “I think most five-day-a-week workers whose jobs are in a city like London, Manchester, Birmingham or Glasgow will not be doing five days a week [in the office] when this is all over,” he said.

The government said a further 58 people had died within 28 days of testing positive for Covid-19 as of yesterday, bringing the UK total to 126,573.
#covid 19  #covid  #boris johnson  #vaccines
Add Comment