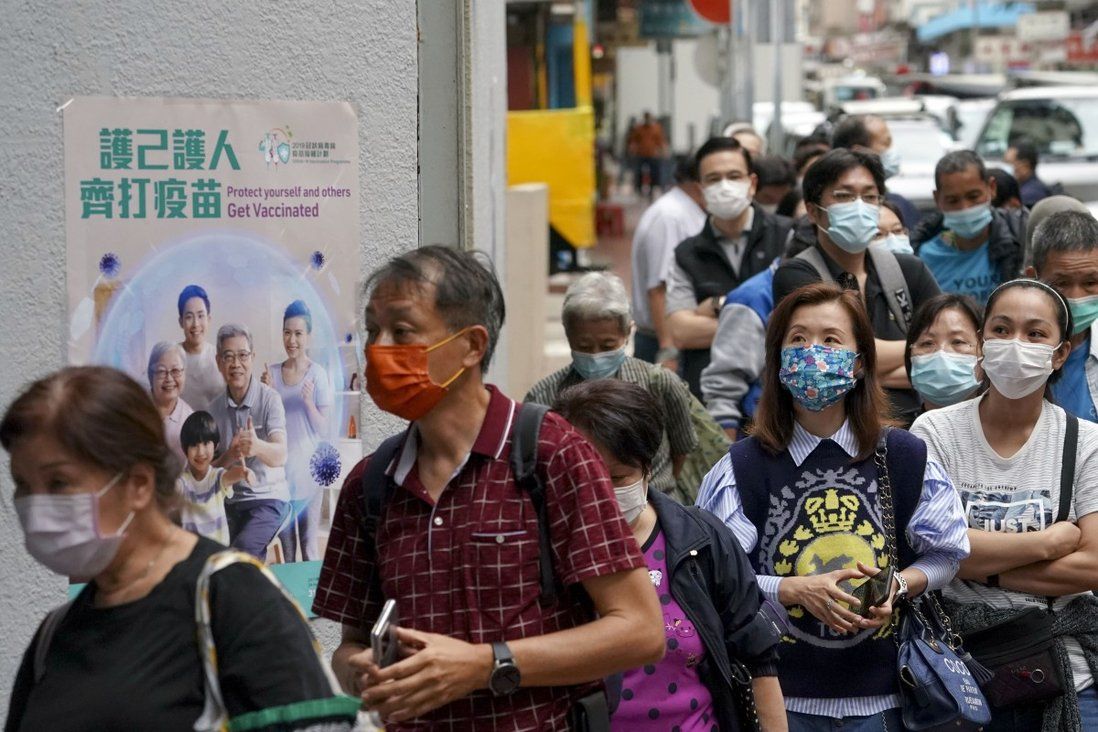 Bookings for Hong Kong’s delayed launch of Pfizer-BioNTech coronavirus vaccinations will open on Wednesday, with 140,000 slots available for priority residents to receive the first jabs a week later, the authorities have revealed.

Seven more community vaccination centres will open to help administer the jabs to five priority groups, such as frontline workers and those aged 60 and above, in time for next Wednesday’s launch of the BioNTech scheme, according to civil service chief Patrick Nip Tak-kuen. A total of 140,000 slots would be available in the initial roll-out, Nip said on Monday.

The government previously selected 200 priority residents to receive Sinovac jabs ahead of the official start of those vaccinations, and a similar system for frontline medical workers would be in place for the BioNTech doses, the minister added.

“Both vaccines are vetted by experts and their efficacy rates are higher than the threshold specified by the World Health Organization,” said health minister Sophia Chan Siu-chee, as she appealed to the public to get vaccinated as early as possible.

Originally marked to arrive last Thursday, 585,000 doses of the vaccine jointly developed by the German firm BioNTech and American pharmaceutical giant Pfizer only landed in the city on Saturday.

The supply will provide the city’s 2.4 million essential frontline workers and at-risk residents – who have priority in the inoculation drive that launched this week – an alternative to the Sinovac jab.

Chan also noted that one man who had experienced dizziness and heart palpitations after receiving the Sinovac vaccine on Saturday was currently in stable condition, but remained in hospital. It was still unknown when he could be discharged, she added.

The health minister said the BioNTech vaccines had a higher likelihood of triggering adverse reactions such as headaches or fevers, but emphasised that these were common and moderate side effects.

Chan said that, based on WHO recommendations, the city had created an online system and encouraged health workers to use it to log any abnormal reactions to vaccines. The government had contracted a team from the University of Hong Kong to help monitor the system, she added.

“We will work with HKU to proactively collect data from public health institutions regarding any possible abnormal clinical reactions that might occur after vaccination – particularly any serious or uncommon side effects such as Guillain-Barré syndrome – and examine if they are correlated, while also monitoring any adverse reactions that might appear among certain groups of people,” Chan said.

Any reports from medical workers about adverse reactions would be passed on to the government’s expert panel to assess whether they were directly related to the vaccine, she said.

Nip also said 20,000 residents had received Sinovac jabs since the vaccination drive started last Friday. A total of 63,000 doses are being distributed over the next three days to about 830 private doctors from Monday.

Meanwhile, slots for the Sinovac vaccine were filled by midday at 19 of the 26 community vaccination centres and 18 general outpatient clinics providing the mainland-produced jab, including all the centres on Hong Kong Island.

By 2pm, more than 130,500 Hongkongers had made an appointment since the second round of registrations opened at 9am.

About 830 physicians, representing about 20 per cent of the city’s 4,000 private clinics, have also ordered 63,000 doses of vaccines from the government, below the initial 1,000-plus doctor target.

“Some of these doctors who have expressed an interest in joining have not reserved the vaccines with the Department of Health,” Nip said. “For these doctors, if they would like to reserve the vaccines, they can make arrangements with the department.”

Dr Henry Yeung Chiu-fat, president of the city’s Doctors Union, said private physicians were ready for the roll-out, and some clinics had already received hundreds of bookings.

Government regulations stipulated each clinic could arrange for up to 80 people to be vaccinated, which might mean more popular clinics would run out of shots quickly, Yeung said.

It might take clinics with fewer bookings about a week to fill their 80-person quota, he added, while those in smaller premises could be limited to immunising one or two people an hour, given the requirement to monitor people for 30 minutes after receiving the jab.

Yeung said some smaller clinics were concerned about patients having to wait outside, and so had opted out of the programme entirely.

“And about 20 private clinics have said they have not even heard back about their registrations at all, so I have sent a list of names to the authorities,” he added.

Those that had successfully registered were concerned about the jabs arriving on time, he said.