U.S. Secretary of State Antony Blinken raised concerns about an escalating number of crossings by migrants from the three countries during a visit on Monday to Mexico City, two U.S. and two Mexican officials told Reuters, but Mexico did not promise any specific actions.

One U.S. official said trying to convince Mexico to agree is "an uphill battle."

Mexico already accepts U.S. returns of migrants from Guatemala, Honduras and El Salvador. So far, this fiscal year about 299,000 people from those nations have been expelled at the border, compared to about 9,000 returns from Cuba, Nicaragua and Venezuela.

The U.S. effort to pressure Mexico on these three particular nationalities illustrates the depth of concern within the Biden's Democratic administration about their border crossings. Most migrants from Cuba, Nicaragua and Venezuela who cross into the United States are allowed to stay to pursue asylum claims, since they are difficult to deport due to frosty diplomatic relations with their governments.

Mexico's foreign ministry declined to comment. A spokesperson for the White House National Security Council declined to discuss "diplomatic conversations" but said that nations in the region "have already begun to take collective responsibility to manage migration flows, including through repatriations."

U.S. border agents have made a record 1.8 million migrant arrests so far in fiscal year 2022, with many attempting to cross multiple times, creating humanitarian challenges and political liabilities for Biden ahead of the Nov. 8 midterm election.

Of those arrests at the southwest border, nearly a quarter of the migrants were from Cuba, Nicaragua and Venezuela, up from 8% in 2021 and 3% in 2020. Most were let into the United States to pursue immigration cases.

The Biden administration has publicly sought to end the COVID health order, known as Title 42. Issued in early 2020 under former Republican President Donald Trump, it allows U.S. border authorities to rapidly expel migrants to Mexico or other countries without the chance to seek U.S. asylum. A federal Trump-appointed judge in Louisiana blocked the administration from ending the order earlier this year, even as U.S. health officials said it was no longer needed to protect against COVID spread.

But behind closed doors, some Biden officials still view expanding expulsions as a way to deter crossers, one of the U.S. officials said, even if it contradicts the Democratic Party's more welcoming message toward migrants.

Advocates and many Democrats fiercely oppose Title 42, saying it has exposed migrants to dangerous conditions in Mexico, including kidnapping and extortion.

Two Mexican officials told Reuters that Mexico does not want to take Cubans, Nicaraguans and Venezuelans expelled from the United States because those countries resist accepting deportation flights from Mexico as well.

Instead, Mexico aims to step up internal flights of migrants from its northern border to its southern border to relieve pressure on the shared frontier, one of the officials said.

Mexico would like Washington to relax economic sanctions against Venezuela to help curb the exodus from the country and make it easier for migrants to work in the United States legally, two Mexican officials said.

Meanwhile, U.S. border officials in El Paso, Texas, say they have been forced to release hundreds of migrants on city streets near shelters and bus stations to ease overcrowding at their facilities.

Many of the Venezuelans arriving have no family members or sponsors, further straining charity and government agencies that assist them, said Mario D'Agostino, El Paso's deputy city manager. 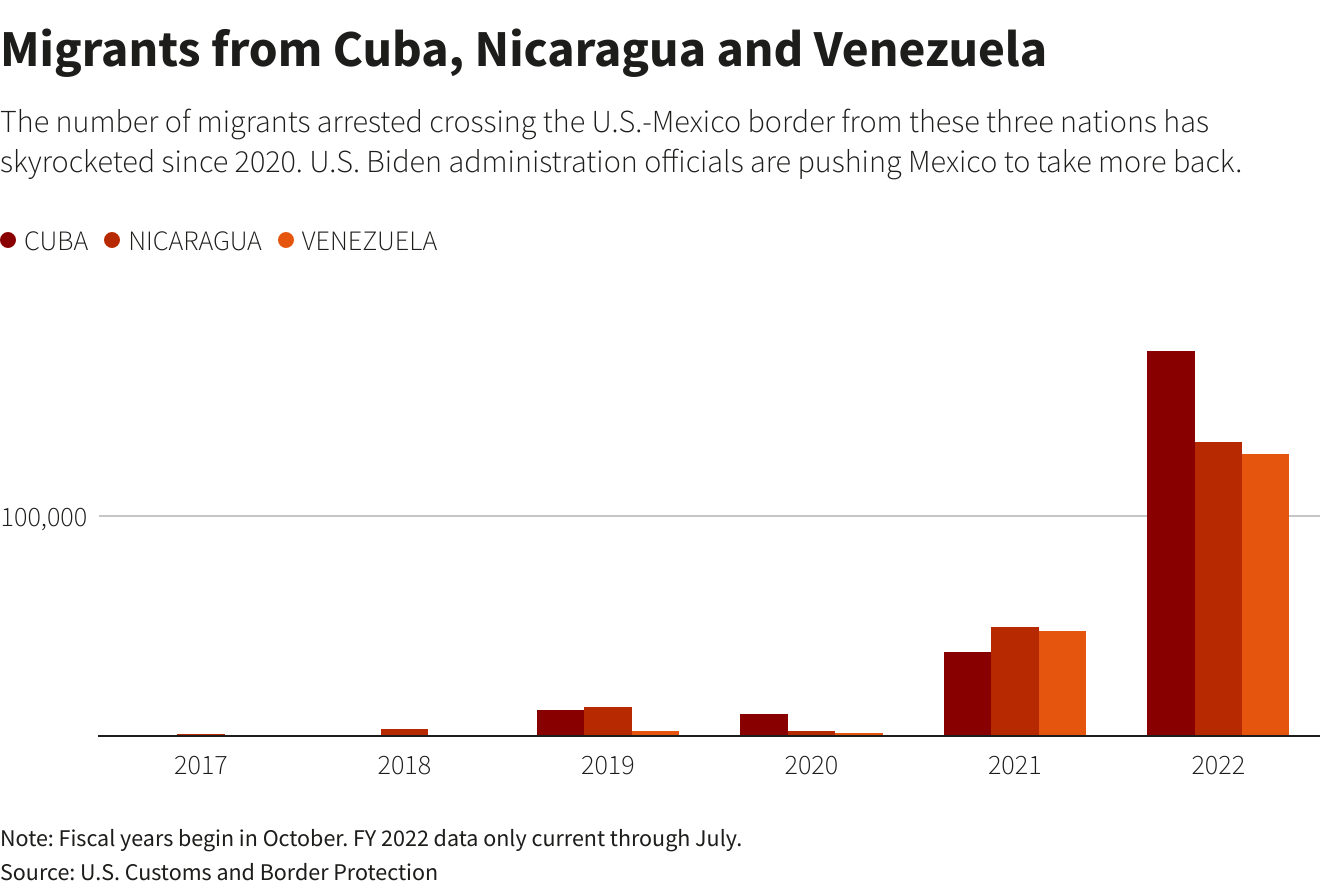 The Democrat-controlled city has contracted charter buses to carry migrants north to New York City, an effort that comes after the Republican governors of Texas and Arizona drew national attention by busing thousands of migrants to Democrat-led northern cities.

Biden officials are also exploring ways to push responsibility to other nations beyond Mexico, sources said.

For example, the White House wants Panama to accept deported Venezuelans if they passed through the Central American nation en route to the United States, two of the U.S. officials said.

Nearly 70,000 Venezuelans entered Panama from its Colombian border this year through August, compared with 1,150 in the same period last year, according to official data.

Panamanian government officials did not respond to a request for comment.

Separately, the Biden administration had been sending a small number of Venezuelans to the Dominican Republic on commercial flights, two of the U.S. officials said, a continuation of a Trump-era practice.

But the program was halted after pushback earlier this year from the office of Senator Robert Menendez, a Democrat from New Jersey, according to one of the U.S. officials and a person familiar with the matter. In February, Menendez called deporting migrants fleeing Venezuela's "cruel regime" to third countries "extremely disturbing."