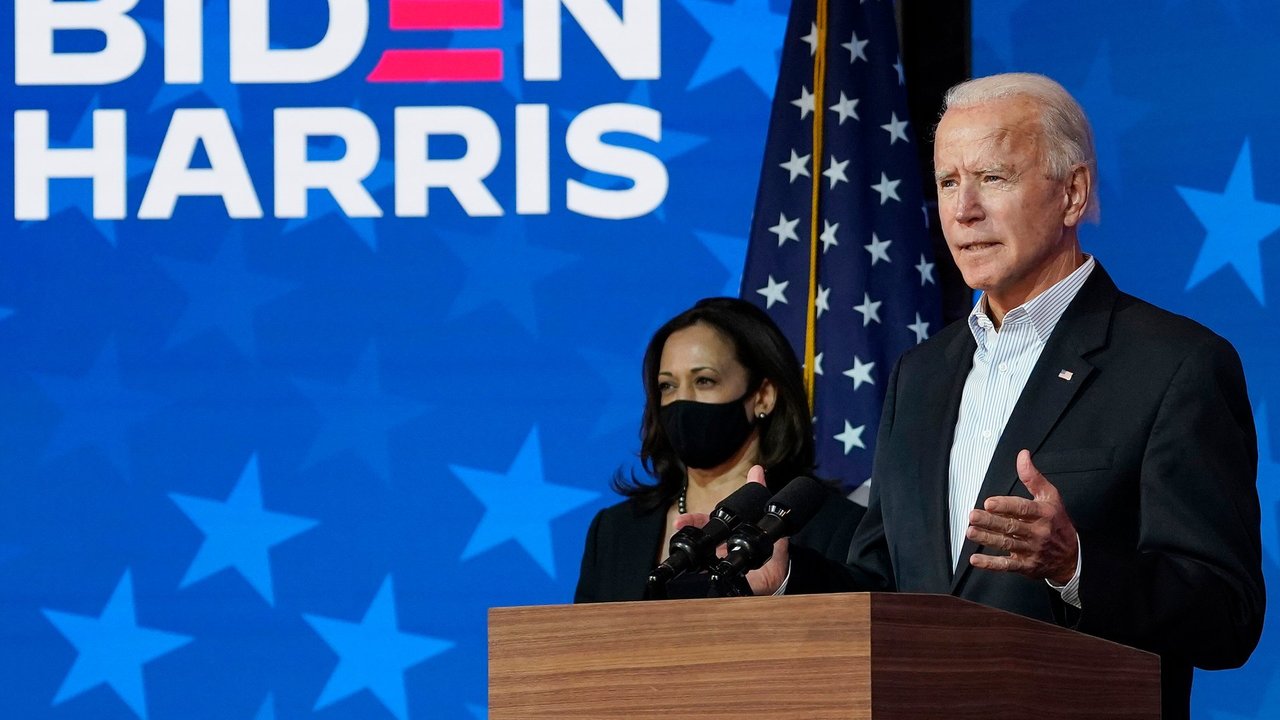 Biden sleepwalks to the White House

‘You all... declare me dead. Guess what? I ain’t dead. I’m not going to die.’ That was Joe Biden back in January, speaking to the New York Times editorial board. ‘Everybody dies,’ replied a female Times board member, showing that lightness of spirit that is her newspaper’s speciality. ‘I’m not going to die politically,’ said Biden.

Well, Joe was right. He ain’t dead, politically. Assuming he doesn’t die, physically, he will on 20 January become the 46th president of the United States of America. Not bad for a 78-year old boy from Scranton, Pennsylvania with a lifelong speech impediment and a worrying tendency to forget where he is.

People said that Biden would be too old and senile to beat the political weather system that is Donald J. Trump. He has proved them wrong — just. He has been called a Democratic fossil, demented, his campaign a ‘zombie effort'. Yet it turns out, in this morbid year of disease and crisis, a zombie candidate is exactly what the majority of Americans wanted.

Americans aren’t as optimistic as they used to be. They now seem to prefer politicians who deal in negativity. Four years ago, Donald Trump won an election after telling his countrymen that ‘the American dream is dead’. This year, in a strange turnaround, Trump tried to present himself as the bright-side candidate. ‘Don’t be afraid of Covid,’ he said, after his own brush with the virus, ‘Don’t let it dominate your lives.’ Biden, by contrast, promised voters ‘a dark winter’ of death and almost certainly more lockdowns and pandemic restrictions. Americans preferred the gloomy message. At the moment, it seems, free peoples seem to quite like the idea of not being free.

Biden’s whole candidacy was numbingly negative. He ran a campaign that didn’t actually campaign. The strategy was obvious: withdraw from the public eye and turn the election into a referendum on Trump, who, though loved by fans, has never been popular with the American electorate as a whole. It was brilliant in its way: the President’s nuclear ego means he can’t help but grab everyone’s attention all the time. And a lot of people really don’t like having to see Donald Trump everywhere they look. Trump’s great skill is his political jujitsu: using his opponents' strengths against them. But he struggled to grapple with a frail older man who seemed to be avoiding the fray.

The pandemic gave Biden the perfect excuse to make himself invisible: the events he did were small and ultra-Covid-secure. He shunned press conferences and never really had to face much media scrutiny. Other than when he beat Bernie Sanders to secure the nomination and when he gave a (surprisingly fluent) acceptance speech at the mostly virtual Democratic National Convention, Biden rarely dominated the headlines.

Who needs energy or enthusiasm? Almost nobody, other than the people who are likely to get a job in his administration, is all that excited at the prospect of Biden’s presidency. And yet he will sleepwalk into the White House in two months.

Barack Obama inspired a movement with his message of ‘hope and change’. All Biden offers is a faint and probably fleeting hope that the turbulent Trump years might be put aside, and perhaps sincere relief in many quarters that, from 2021, the Trump administration will not be in charge of the Covid pandemic.

Media commentators, in their dreamier moments, like to say Biden could be a 21st-century Franklin Delano Roosevelt, a masterful politician who steers the world’s most powerful country towards a kinder future. To which the only sane answer is to use Joe Biden’s favourite phrase: com’awn man! Biden probably can’t remember half his major campaign promises, let alone carry them out. Without the Senate, will his administration be able to pass much legislation? The election result has proved to be an unexpected boon to America’s vanishing centrist coalition. The Bad Orange Man is on his way out — kicking and screaming — but a Republican Senate means the radical left of the Democratic party can be checked. Joe prides himself on having worked ‘across the aisle’ with the Republicans in the 1990s, which why he was the preferred Democratic candidate for many NeverTrumpers.

But Biden has won not because of he is but who he isn’t. He isn’t Trump. He also isn’t Hillary Clinton. He won because people generally think he’s a decent and caring man. In 2016, in the weeks before the presidential election, Clinton’s ‘favourability’ rating started to collapse as Americans took against her arrogant and smug candidacy. But Biden’s favourability score held steady and improved in the run-up to the big day. The Trump machine threw all sorts of dirt at him, none of it stuck. Hunter Biden’s laptop scandal — and the emails suggesting Joe Biden was involved in his son’s shady business dealings with foreign governments — did not turn out to be as devastating as Team Trump hoped, partly because large chunks of the media refused to cover it, partly because people just didn’t want to believe that sweet old Joe could be so corrupt. They were much more inclined to think that Hillary was up to no good. She just had that effect on people. Sexism, perhaps.

Biden has been in frontline politics long enough for everyone to know that he isn’t some closet radical. Trump and his surrogates did manage to ring alarm bells with their theory that Biden, by being old and hopeless, would be a ‘trojan horse’ for socialism. But Team Trump also tried to woo black voters by pointing out how tough-on-crime-bordering-on-racist Joe Biden had been in the 1990s. In the end, people just seemed to conclude that he can’t be that bad.

Exit polls suggest that Trump did better with women than four years ago. Still, the opposite sex voted for him overwhelmingly. He also won over a huge majority of young people. That was inevitable, given the widespread revulsion towards the under 30s feel towards Trump.

More crucially, however, in terms of scraping victory in the electoral college, the Democratic nominee also appeared to eat into Trump’s advantage with non-college educated whites and seniors in critical states. Perhaps it was foolish of Trump to spend so much time mocking Joe’s fading mental faculties, given that nearly a quarter of the American electorate is over 65 years old and probably sensitive about dementia.

Joe Biden might not be quite as amiable and decent a man as his spokespeople make out. But Biden’s relative bonhomie only took him so far. He also had money — lots of it.

At the start of the year, the Trump campaign appeared to have a significant financial advantage. Somehow, however, and credit probably goes to Trump’s now-disgraced campaign manager Brad Parscale, Team Trump ended up spending the best part of a billion dollars on a largely digital campaign that appeared to achieve nothing. As the campaign went on, Biden’s fundraising outpaced Trump. In the first half of October, he garnered $130 million (£99 million), some 90 million (£68 million) more than Trump.

The Biden campaign also proved itself quite shrewd in courting social media influencers over obnoxious mega-celebrities, which was a relatively cost-effective way of mobilizing online voters.

But nothing helped Biden more than the partisanship of most of the media — both traditional and social. With the exception of Fox News, which as Trump often has pointed out was hardly a reliable Republican cheerleader this year, all the major TV networks were almost relentlessly negative towards Trump. So were most newspapers, with the exception of the New York Post, and most popular media websites. Even the Drudge Report, a hugely successful news aggregator and major Trump booster in 2016, turned against the President.

The media failed or refused to scrutinise Biden or ask him challenging questions. Journalists also colluded — to use the word so often employed in relation to Trump and Russia — with the Biden campaign to not run that Hunter Biden story.

Twitter and Facebook went even further, blocking accounts which linked to the New York Post’s big scoop revealing emails that suggested Biden may have been compromised by a significant business deal with the Chinese. Pundits dismissed the story as a vile smear job cooked up Trumpist operators, and to some extent it was. But their unwillingness to discuss the actual claims went beyond incuriosity; it amounted to a cover-up. Far too many journalists just refused to cover a story just because it might help Donald Trump be reelected.

For now, then, the media can celebrate mission accomplished: the Trump presidency will end in January. American government can return to its pre-Trump settings. The key figures of Barack’s Obama administration will now resume power as Obama’s former vice-president becomes the Commander-in-Chief. The climate change lobby can celebrate the return of the Paris Agreement. The Iran deal will probably be restored. The Trans-Pacific Partnership. The transatlantic elite can breathe a sigh of relief. But Biden’s victory isn’t a triumph of hope and change. It is in many ways the opposite.
Add Comment