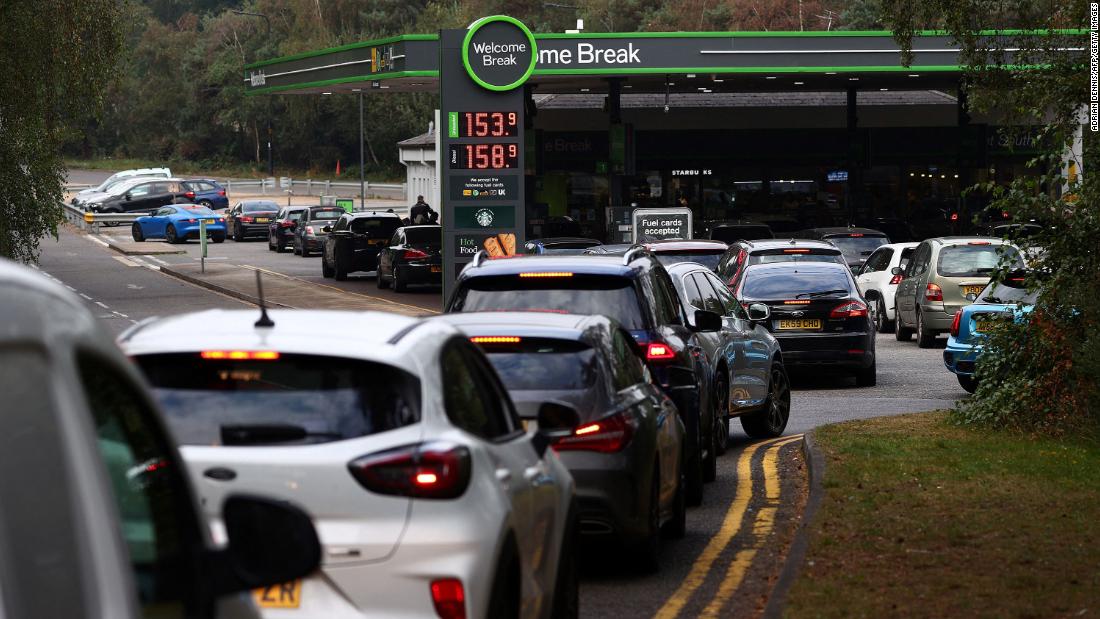 On Sunday, Boris Johnson will walk among his Conservative faithful for the first time since October 2019, as members of the UK's governing party gather in the English city of Manchester for their 2021 conference.

He does so as Britain faces numerous crises, from fuel shortages bringing its roads to a grinding halt to energy prices soaring due to unusually low gas supplies. There are serious concerns that the UK will experience food shortages as it approaches Christmas, while supermarket shelves are already looking bare in some areas.

It's hard to fathom that the last time Johnson attended a party conference, he did so as the new leader and, in the eyes of many, a conquering hero on a mission to finally deliver Brexit -- an issue that had paralyzed the UK since 2016.

Since then, Johnson has won a parliamentary majority, delivered a version of Brexit harder than many dreamed -- or feared -- possible, been engulfed in numerous scandals for his handling of the Covid-19 pandemic and faced harsh criticism from many of his former supporters, who now question his competence.

Some are quick to blame Johnson's extreme interpretation of Brexit -- introducing hard trade barriers with Britain's closest trading partner and restricting the ability of Europeans to work in the UK -- for the shortages.

Others blame the shock of a global pandemic that has impeded movement between countries and disrupted supply chains. 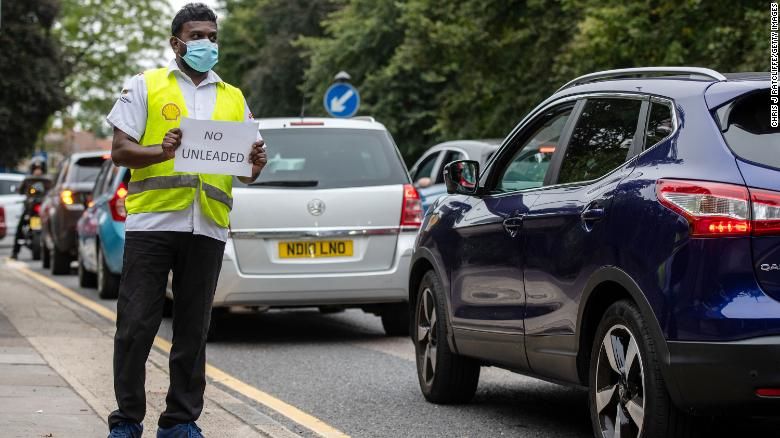 A Shell garage employee holds a sign on the side of the road informing a queue of traffic that they do not have unleaded petrol on September 25, 2021, in Blackheath, London. 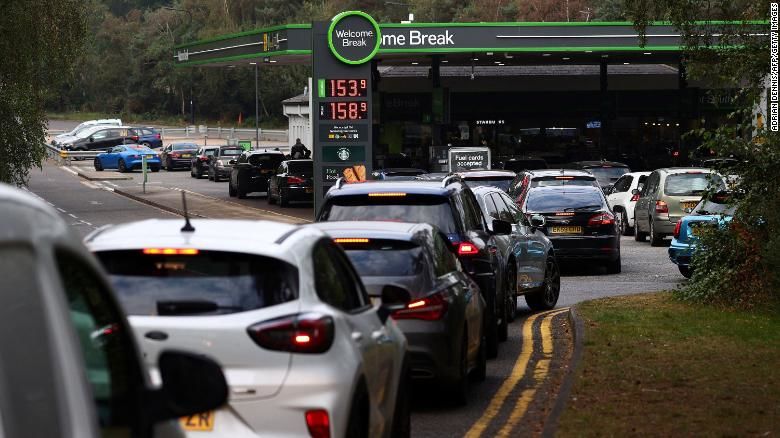 Motorists queue for petrol and diesel fuel at a petrol station off of the M3 motorway near Fleet, west of London, on September 26.

The truth is it's probably a combination of the two. What's tricky for Johnson, though, is that industry leaders and logistics experts are increasingly united in their belief that these problems could have been mitigated had the Prime Minister and his government heeded their warnings months, and in some cases years, before pumps ran dry and shelves emptied.

The most pressing issue is without question the shortage of fuel. The reason for these shortages is simple: there are not enough qualified tanker drivers to deliver fuel to filling stations.

Labor shortages are also partly responsible for the other woes facing Brits. From seasonal workers who pick and process fresh food to, again, drivers delivering that food in and out of cold stores, the UK could be on its way to a grim winter if fuel or food is scarce in the run-up to Christmas.

Capping off the potential for seasonal misery: heating homes could suddenly become much more expensive due to gas shortages. While this one cannot be solely blamed on Brexit, the government can be questioned on why a small island with a large population has among the lowest gas storage capacity in Europe. 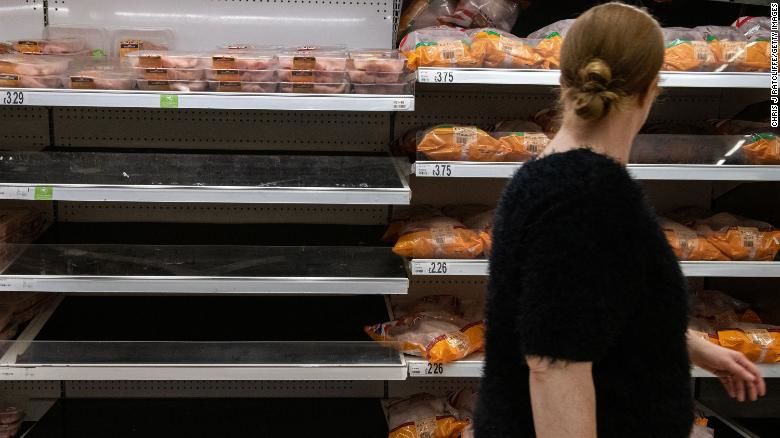 A woman walks past empty shelves that stock chicken at an Asda supermarket on September 19, 2021, in London.

Can Britain's bleak winter be avoided? The short answer is yes, according to those who best know the issues at hand.

Claire Walker, co-executive director of the British Chambers of Commerce, told CNN that while business accepts the government has "made clear its priority is to transition from a reliance on EU workers to a focus on the domestic workforce," an undertaking such as this "requires careful planning and close working between business and government."

Unfortunately, many of those working in the affected industries point to a trend in the thinking of Johnson and his government that suggests they might not be willing to smooth this transition if it tramples on their Brexiteer principles.

"The government has consistently made decisions that seem to prioritize Brexit over avoiding potential disasters," says Anna Jerzewska, founder of Trade and Borders, a consultancy that advises importers and exporters.

She points to the summer of 2020, when the UK had the option to remain in the EU's customs union and single market a little longer, to cope with the strains on supply chains presented by the collision of Brexit and Covid.

"While they can credibly claim that Covid was a disaster no one could predict, we did know that leaving the transition period during a winter spike would create huge issues. They had time to put procedures in place but chose not to. And all the while, they left clients like mine, in the middle of a pandemic, without guidance on the post-Brexit arrangement until the very last minute." 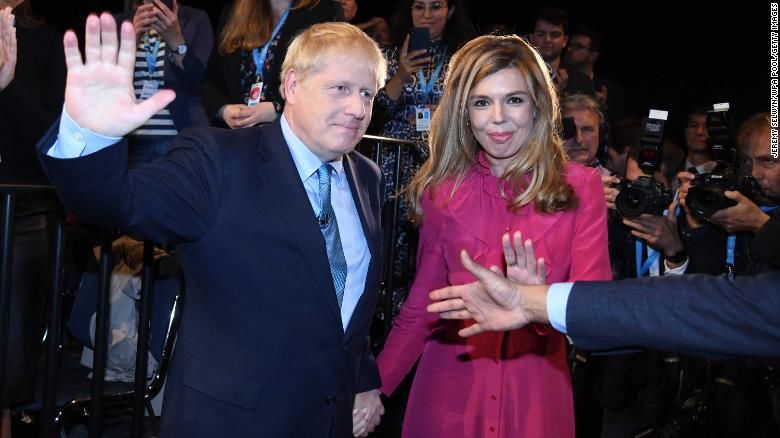 Boris Johnson with his wife Carrie Johnson following his keynote speech at the 2019 Conservative Party Conference in Manchester.

When it comes to gas shortages, consecutive governments declined to build up the UK's capacity to store liquid gas, instead relying on a just-in-time supply chain -- as it does with many other critical products like foods and medical equipment.

"There is nothing preventing the government from maintaining gas reserves or PPE stockpiles. It's just that we seem to like living life on the edge," says Sam Lowe, senior fellow at the Centre for European Reform.

"Just-in-time is a perfectly valid way to run your economy," he adds, but "when you are fundamentally changing your entire economic model and living through an unprecedented crisis, it makes sense to have reserves of critical products to avoid a crunch-point crisis."

Charitable onlookers might say that predicting the need to stockpile because of the pandemic would require appointing Nostradamus to your cabinet. However, the potential for a pandemic has been high on the UK's risk radar for years now.

The UK's 2015 National Risk Register placed "Influenza pandemic" as its first bullet in the section labeled "The highest priority risks." In 2017, the register made specific mention of airborne human diseases.

A government spokesperson responded to the criticisms made by interviewees in this article by saying that the "recent challenges that have arisen across Europe are the result of a unique and unprecedented combination of issues, and we are working closely with businesses to support them through this period."

They said that the government is in regular contact with the food and farming organizations and industry to help them manage the situation." They added that "domestic gas storage capacity has had little bearing on the price of gas" and that "UK is not dependent on Russian oil or gas" as it "benefits from access to gas reserves in British territorial waters and secure sources from reliable import partners, such as Norway."

One way or another, it seems Johnson had ample time to cushion the blow for British citizens. The question is, why didn't he?

To get an answer, CNN spoke with multiple current and former government officials, all of whom worked with Johnson during the period when such decisions could have been made. All spoke on the condition of anonymity.

"When we first came into office, the country had been exhausted by Brexit's deadlock," says a former senior adviser to Johnson. "All we talked about was how to call an election, win a majority and do Brexit. We genuinely feared if it dragged on any longer it could lead to something nasty happening in society. There was limited capacity for anything else."

Another senior government adviser described the focus of the time being solely on delivering Brexit with a smile, even though fears over driver shortages and medicine supply chains were already causing departmental headaches.

Other government officials say that this insistence on optimism meant that Johnson had blind spots when it came to the realities of Brexit and Covid dovetailing. 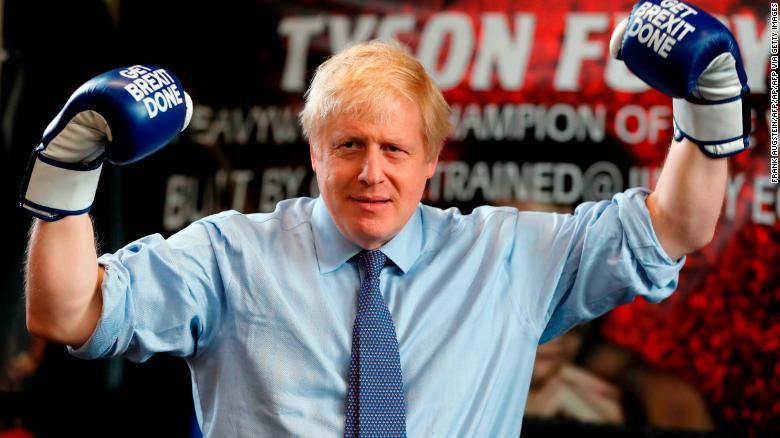 "He doesn't like dealing with a reality. He only wants to go out and tell the public that everything's going great," says one former senior official. "We tried to tell him that at some point shortages of all sorts were likely and he can't just smile and pretend things are not happening."

On one hand, Johnson has been unlucky, a former government minister and Johnson loyalist says. "It is entirely reasonable for a new government to look at all of the hypothetical things that could happen, including a pandemic, and ask how likely it is to hit while we are in office."

However, the former minister concedes that it is, on the other hand, entirely reasonable to ask why "a government introducing once-in-a-generation changes like Brexit wouldn't do everything in its power to stop even the least likely disaster compounding Brexit difficulties."

Could it really be that the reason the UK was so ill-prepared for events that had been predicted is simply because Johnson doesn't like dealing in bad news? 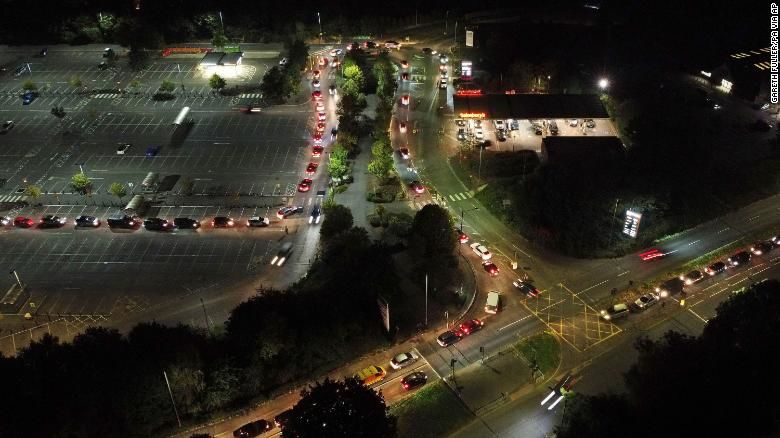 Motorists queue to fill their cars at a Sainsbury's fuel station in Ashford, England, Saturday, September 25.

Even his closest allies admit that blind optimism is a trait of this Prime Minister.

"I would never want to temper Boris' enthusiasm, but he does need to hire people who make up for his weaknesses and are more interested in getting down into the detail than top-level, good news vision type stuff," a former senior adviser to Johnson says.

There are short-term fixes for Johnson, should he want to lessen these crises. He could further U-turn on short-term visas, allowing more foreign workers to plug gaps. He could seek a closer relationship with the EU to shore up supply chains and stockpiles. However, until there is sufficient pressure on Johnson from either the public or his party to do so, any options that involves more immigration or more Europe is a nonstarter for the man who embodied Brexit.

The fuel crisis has damaged Johnson badly, though it hasn't handed the opposition Labour Party sufficient polling gains that should worry Johnson on the assumption that the shortages will soon end. He is, despite all of this, still a relatively secure leader with a big majority and broad public appeal.

The question Johnson's Conservative delegates must consider as they gather for the first time since the world turned upside down: is the man who, two years ago, used a feel-good platform to bulldoze through the Brexit deadlock and get a specific job done also the best man to lead in a crisis? And if not, then how can they displace a popular leader with a majority before the next scheduled election in 2024?