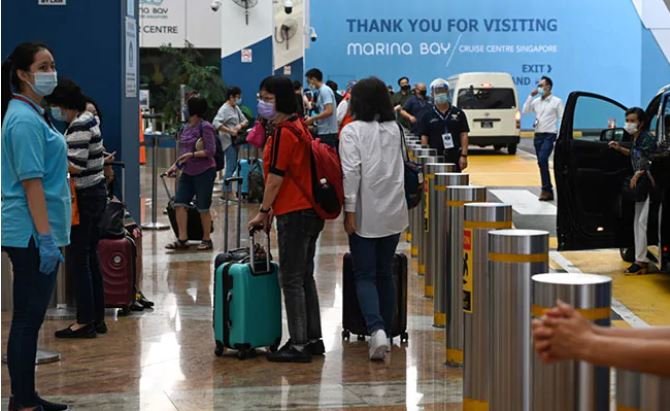 All Aboard: Singapore "Cruise To Nowhere" Sets Sail

The liner departs into the Malacca Strait, a major shipping lane between the Indian and Pacific Oceans, and will head into international waters.

Hundreds of passengers were setting sail from Singapore Friday on a "cruise to nowhere" with safety measures in place to prevent coronavirus outbreaks, as the industry seeks to bounce back from a pandemic-induced crunch.

Cruises were halted worldwide in March after travel restrictions kicked in and several vessels were hit by major outbreaks, but have now resumed in a few places.

The "cruise to nowhere" -- starting and ending at the same place, with no stops -- has proved a hit, and mask-wearing passengers lined up for virus tests conducted by workers in protective suits before boarding the World Dream liner.

The liner departs Friday evening into the Malacca Strait, a major shipping lane between the Indian and Pacific Oceans, and will head into international waters before returning to the city-state Sunday.

Vinoth Arun, 27, a financial consultant accompanied by his girlfriend, was among about 1,400 passengers on board -- half the ship's capacity, to ensure social distancing.

"The fact that you carry your luggage and you bring your passport out, I guess it's just the mindset that you're going on holiday," he told AFP.

He felt it was safer to sail now compared with earlier this year, when cruise ships were hard hit: "Now everyone knows about Covid and they're not so nonchalant about it any more."

The cruise operator, Malaysia's Genting Group, has introduced a raft of safety measures.

Rooms and public areas are disinfected regularly, restaurants have reduced capacity, guests have to book the swimming pool in advance, while the ship's clinic is kitted out with a machine that churns out virus test results in an hour.

The ship also has an intensive care unit, in case anyone does contract Covid-19.

Despite not making any stops as a regular cruise would, there is plenty of entertainment on board such as a casino, movies, water slides and a Christmas show.

Accounts executive Renee Toh, 56, who was cruising with her husband and daughter, said she was excited to be able to take to the seas, and was looking forward to a "relaxing time" with her family and having some fun at the casino.