The latest leaps in artificial intelligence in everything from cars to robots to appliances will be on full display at the annual Consumer Electronics Show (CES) opening Thursday in Las Vegas.

Forced by the pandemic to go virtual in 2021 and hybrid last year, tens of thousands of show-goers are hoping for a return to packed halls and rapid-fire deal-making that were long the hallmark of the annual gadget extravaganza.

"In 2022, it was a shadow of itself — empty halls, no meetings in hotel rooms," Avi Greengart, an analyst at Techsponential told Agence France-Presse. "Now, [we expect] crowds, trouble getting around and meetings behind closed doors — which is what a trade show is all about."

The CES show officially opens Thursday, but companies will begin to vie for the spotlight with the latest tech wizardry as early as Tuesday. 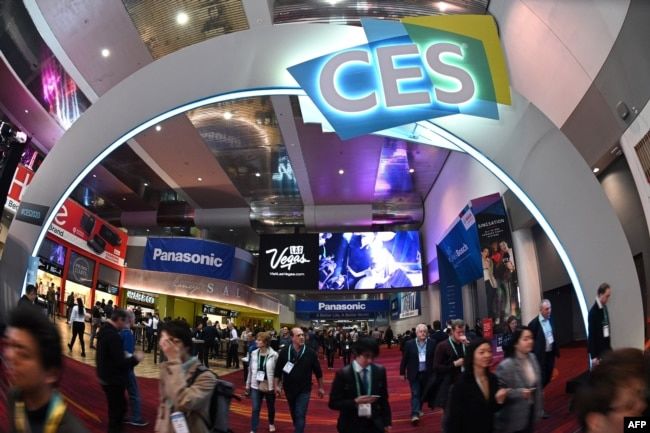 FILE - Attendees walk through the 2020 Consumer Electronics Show (CES) in Las Vegas, Nevada, Jan. 10, 2020.
CES will be spread over more than seven hectares, from the sprawling Las Vegas Convention Center to pavilions set up in parking lots. Ballrooms and banquet rooms across Sin City will be used to hustle up business.

With transportation now computing's new frontier, next generation autos, trucks, boats, farm equipment, and even flying machines are expected to grab attention, according to analysts.

"It's going to feel almost like you're at an auto show," said Kevan Yalowitz, head of platform strategy at Accenture.

More than ever, cars now come with operating systems so much like a smartphone or laptop computer, Accenture expects that by 2040 about 40% of vehicles on the road will need software updated remotely.

And with connected cars come apps and online entertainment as developers battle to grab passenger attention with streaming or shopping services on board.

Electric vehicles enhanced with artificial intelligence will also be on display "in a big way," Greengart said.

"What has really been the buzz is personalized flying machines," said independent tech analyst Rob Enderle. "Basically, they are human-carrying drones."

Led by Zuckerberg's Meta, immersive virtual worlds referred to as the metaverse are seen by some as the future of the ever-evolving internet, despite widespread criticism that the billionaire CEO is over-investing in an unproven sector.

After being a major theme at CES last year, virtual reality headgear aimed at transporting people to the metaverse is expected to again figure prominently.

Formerly known as Facebook, Meta will be allowing selected guests to try its latest Oculus Quest virtual reality headset, trying to persuade doubters that the company's pivot to the metaverse was the right one.

Gadgets or services pitched as being part of the next-generation of the internet — or "Web 3" — are also expected to include mixed reality gear as well as blockchain technology and NFTs.

Web 3 promises a more decentralized internet where tech giants, big business or governments no longer hold all the keys to life online.

"The idea of how we are going to connect is going to be part of the big trend at CES," said Creative Strategies analyst Carolina Milanesi.

Analysts had expected cryptocurrencies to be touted among Web 3 innovations at the show, but there "could be pullback" because of the implosion of cryptocurrency platform FTX and the arrest of its boss Sam Bankman-Fried, according to Milanesi.

CES offerings will likely show effects of the pandemic, since products designed during a time of lockdowns and remote work will now be heading for market even if lifestyles are returning to pre-COVID habits, noted Greengart.

Tech designed to better assess health and connect remotely with care providers will also be strong at CES.

And though the show is unabashedly devoted to consumerism, the environment will also be a theme from gadgets designed to scoop trash from waterways to apps that help people cut down on energy use.

A lot of companies are eliminating plastic from packaging and shifting to biodegradable materials, while also trying to reduce carbon emissions, according to analysts.

"If you are the kind of person who is off the grid growing vegetables, then CES is not for you," Greengart said. "But I do commend companies that find ways to make their products and the supply chain more sustainable."