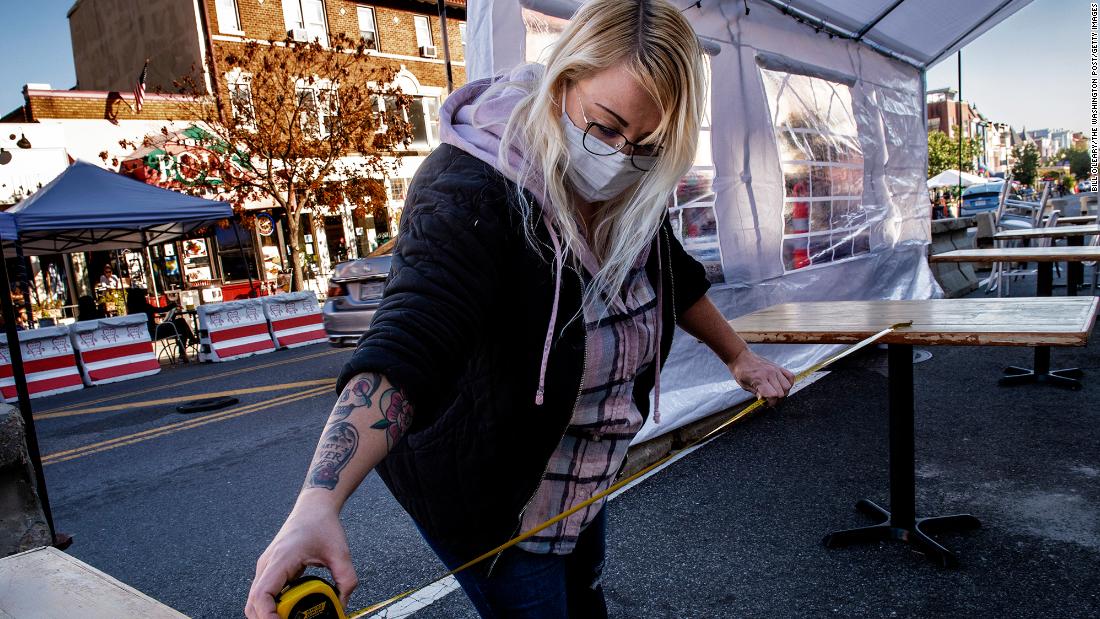 A vaccine might be coming, but the Covid economy still desperately needs stimulus

The coronavirus-ravaged economy just received a jolt of something it hasn't experienced in months: hope.

Pfizer revealed Monday that data show its trial coronavirus vaccine is more than 90% effective, exceeding even the most optimistic expectations. The breakthrough set Wall Street zooming to record heights on hopes for a full economic recovery.

But while the vaccine could be an economic gamechanger, it will take months before doses are widely available -- and the US economy badly needs help now in the form of stimulus.

"This is some of the most unambiguously good news for the economy that we've had in a long time," said Joe Brusuelas, chief economist at RSM International. "We now can see the light at the end of the tunnel. And it's not an oncoming train."

Yet it's crucial that politicians in Washington don't get lulled into a false sense of complacency -- or use the vaccine progress as an excuse to put off or limit the amount of fiscal relief.

"Lawmakers have to complete the bridge they started building at the beginning of the pandemic to get us to the end of the pandemic when people will feel comfortable going to restaurants and ballgames," said Mark Zandi, chief economist at Moody's Analytics.

Failure to provide aid would risk lasting economic damage, with bankruptcies and business closures hindering a full recovery. Industries like restaurants, hotels, concert halls and airlines continue to be crushed by the health crisis, and they can't wait much longer for support.

The dark winter hasn't been canceled

Economists have urged Congress to consider providing enhanced unemployment benefits, forgivable loans to small businesses, aid to the travel industry and funds that prevent a wave of layoffs by local governments hit by massive revenue shortfalls.

The need for fiscal relief is amplified by the worsening pandemic. Infections are soaring, hospitalizations are climbing and deaths are elevated. A record 126,742 new coronavirus cases were reported in the United States on Saturday alone -- the fourth straight day above 100,000 .

The economic rebound will be slowed by new health restrictions. For instance, Rhode Island recently announced a stay-at-home advisory that begins at 10 pm on weeknights and 10:30 pm on Fridays and Saturdays.

"The vaccine is great. It makes everyone feel better. But at the end of the day, the pandemic is as bad as it's ever been," said Zandi. "We still have a lot of unemployed people, small businesses struggling to survive, airlines running on fumes."

'I would have starved'

Rainbow Rhodes, a career bartender/mixologist out of work since March, expressed optimism about the Pfizer (PFE) vaccine.

"The vaccine is promising because people will believe and trust enough to start coming back out," said Rhodes, a 40-year-old who lives in Jersey City, New Jersey. "Until the restaurants, bars and nightlife scene is opened back to full capacity, there's no way a lot of people like us get jobs."

When lockdown orders were issued, Rhodes said her weekly income instantly went from $1,000 to zero. Rhodes has three daughters, two in their twenties and one teenager, and her husband is a career musician who's also been out of work since the spring.

"I'm insanely lucky. If not for friends and family, I would have starved. My husband and I would have had nothing," said Rhodes, who added most days she lives on ramen or eggs.

Rhodes urged Congress to put aside differences and reach a relief deal. "It's absolutely ridiculous. It's a humanitarian crisis and they're just looking the other way," she said.

Hotels are still clamoring for help

The travel industry has been hit particularly hard. Hotel occupancy rates are nearly one-third below pre-crisis levels, according to the CNN Business Recovery Dashboard.

"It's very exciting news," Best Western CEO David Kong told CNN Business Monday. "So many people have been cooped up and feeling depressed. This gives them hope that the end is near."

However, Kong warned the hotel industry still requires federal relief to stay afloat until a vaccine is widely distributed. And he said it's "certainly a fear" that the vaccine news will take the pressure off Congress to act.

"A lot of people are still suffering. It's devastating," said Kong, who added the spike in hotel stocks is for "Wall Street, not Main Street."

Like many hotels, Best Westerns are owned by franchisees rather than a deep-pocketed corporation, and they've cut an estimated 20,000 jobs during the pandemic. Additionally, the parent company that owns the hotel brand has laid off about 800 corporate associates.

Even if a vaccine is widely available in the second half of 2021, the hotel industry won't experience a "solid recovery" until 2023, according to S&P Global Ratings.

With the election over, Congress may not face imminent pressure to get a fiscal stimulus deal done. And Republicans are expected to retain control of the US Senate -- unless the party loses both run-off elections expected to be held in Georgia.

"That could be an opportunity to get people's attention," Kong said of the Georgia races.

The sweeping actions from Congress and the Federal Reserve this spring were aimed at preventing economic scarring. That's because it becomes much harder for those on long-term unemployment to get rehired. Likewise, it takes time for shuttered businesses to be replaced by new ones. It's far more efficient to keep businesses open and workers working, if possible.

Gus Faucher, PNC chief economist, said the looming vaccine increases the need for Congress to prevent long-term scarring.
"We want businesses that are viable in the long run to stay open," said Faucher. "It would be premature to declare victory and go home."

The vaccine progress should minimize fears from deficit hawks that Uncle Sam is going to be on the hook for never-ending support to the economy.
"The fact the vaccine is in sight could make us feel comfortable spending this money," said Constance Hunter, chief economist at KPMG. "We can give you this bridge to the other side because we know it won't be the world's longest bridge."