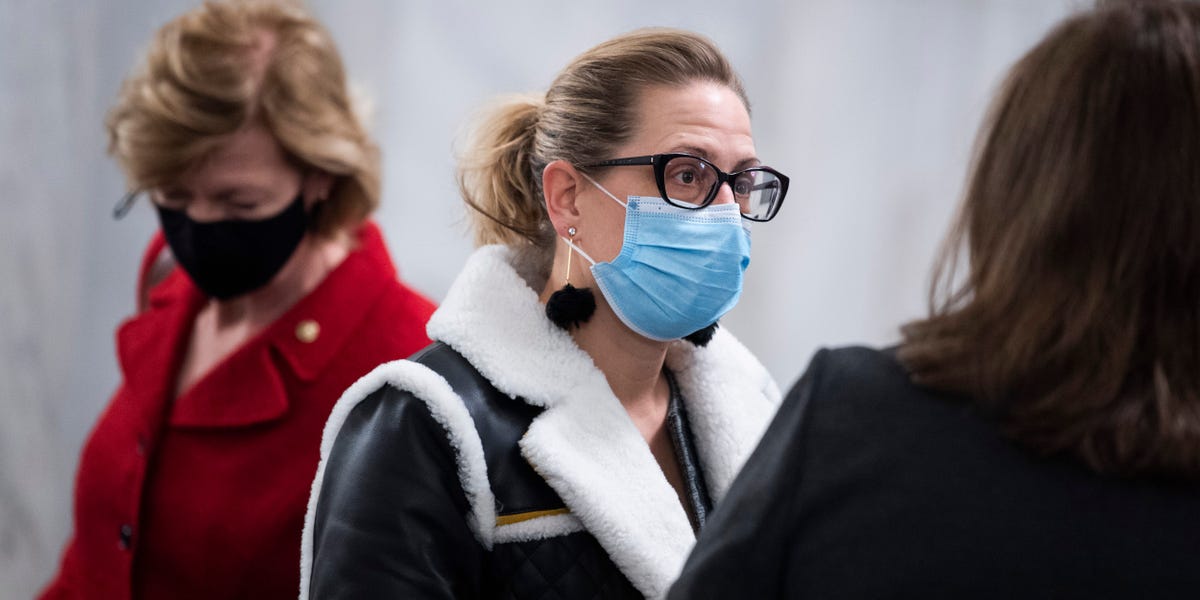 A 2nd Democratic senator has come out against the $15 minimum wage in Biden's stimulus package, imperiling the pay bump

The $15 minimum wage in the Biden relief plan may have received a fatal blow as Sen. Kyrsten Sinema said she opposed it.

A second Democratic senator came out in opposition to including a $15 minimum wage in President Joe Biden's relief package, possibly dealing a major blow to the proposed wage hike.

"What's important is whether or not it's directly related to short-term Covid relief. And if it's not, then I am not going to support it in this legislation," Sen. Kyrsten Sinema of Arizona told Politico in an interview published Friday. "The minimum wage provision is not appropriate for the reconciliation process."

She went on: "It is not a budget item. And it shouldn't be in there."

Sinema, a moderate, isn't alone among Democrats in her resistance to the $15 wage bump. Sen. Joe Manchin told reporters last week that he favored a smaller increase to $11, saying "it's responsible and reasonable."

The $15 minimum wage increase is only one component of Biden's $1.9 trillion federal rescue package. It also includes $1,400 direct payments, $400 federal unemployment benefits, assistance to state and local governments, and $160 billion in vaccine distribution and virus testing funds among other measures.

But the wage provision has been a lightning rod of criticism among Republicans and some Democrats. Republicans argue raising wages will cost jobs during an economic downturn. But the provision is championed by Sen. Bernie Sanders as a critical measure to boost wages for underpaid hourly workers.

The Vermont senator told Insider this week that it would "be in reconciliation if I have anything to say about it — the only way we're gonna get it passed." Under the plan, the wage would be raised gradually from $7.25 an hour to $15 over five years.

But the opposition of two Democratic senators may end up nixing it for now. Democrats are using a legislative maneuver with strict rules called reconciliation to approve the rescue package with a simple majority of 51 votes in the Senate. Vice President Kamala Harris is the tie-breaker in the evenly divided chamber.

That means every Democratic senator must support the rescue plan or else the legislative push collapses. It's also unclear whether the wage increase will end up clearing the stringent budgetary guidelines interpreted by the Senate parliamentarian.

Even if it doesn't, overruling the parliamentarian to include the measure in the legislation — a possible option — risks further fracturing Senate Democrats at a moment they are trying to act swiftly and approve the Biden package by early March.

"We're feeling really good," Sanders told Capitol Hill reporters on Friday. "We think we got a good shot, we're working hard to get the minimum wage through the parliamentarian's office."

Sanders did not answer questions from Insider when asked if Democrats should override the Senate parliamentarian. Manchin told Insider "no comment" when asked about including the wage bump in the relief package.

Biden recently said he didn't think the wage increase would survive the reconciliation process. Instead, the president said he was ready for a separate legislative push on a $15 minimum wage.

"We're kind of smack in the middle of the sausage-making of legislating," White House Press Secretary Jen Psaki told reporters on Friday. "We will see where it ends up on the other side but the president remains committed to raising the minimum wage."

Sanders appeared to dismiss the idea earlier this week, telling Insider: "There are no Republican votes for a $15 minimum wage."
#vaccine  #joe biden  #covid
Add Comment