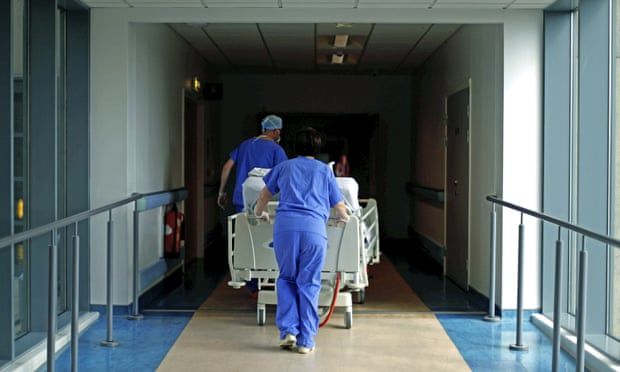 More than 40,600 people have been likely infected with coronavirus while being treated in hospital in England for another reason, raising concerns about the NHS’s inability to protect them.

In one in five hospitals at least a fifth of all patients found to have the virus caught it while an inpatient. North Devon district hospital in Barnstaple had the highest rate of such cases among acute trusts in England at 31%.

NHS England figures also reveal stark regional differences in patients’ risk of catching the virus that causes Covid-19 during their stay. Just under a fifth (19%) of those in hospital in the north-west became infected while an inpatient, almost double the 11% rate in London hospitals. 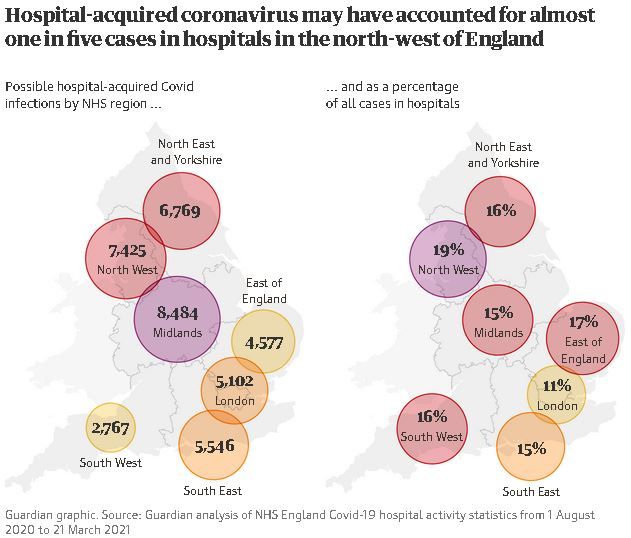 Hull University teaching hospitals trust and Lancashire teaching hospitals trust had the joint second highest rate of patients – 28% – who became infected while under their care. The former has had 626 such cases while the latter has had 486. However, the big differences in hospitals’ size and the number of patients they admit mean that the rate of hospital-acquired infection is a more accurate reflection of the success of their efforts to stop transmission of the potentially lethal virus.

Across England as a whole one in seven (15%) of all patients treated for the virus between 1 August 2020 and 21 March got it while in hospital.

The data shows that hospitals in England estimate a total of 40,670 people probably caught coronavirus while in hospital in their care during that time.

Doctors and hospitals claim that many of the infections were caused by the NHS’s lack of beds and limitations posed by some hospitals being old, cramped and poorly ventilated, as well as health service bosses’ decision that hospitals should keep providing normal care while the second wave of Covid was unfolding, despite the potential danger to those receiving non-Covid care.

“These heartbreaking figures show how patients and NHS staff have been abysmally let down by the failure to suppress the virus ahead of and during the second wave,” said Layla Moran MP, the chair of the all-party parliamentary group on coronavirus. 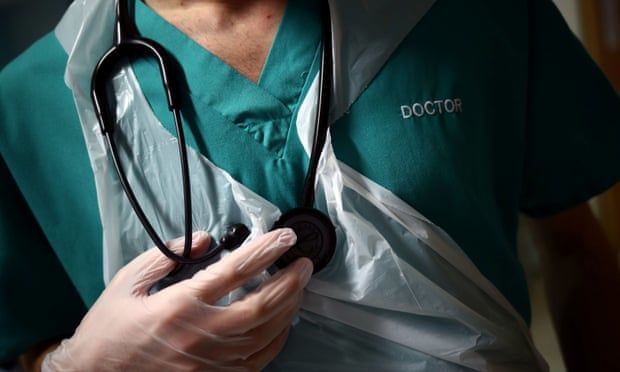 Doctors and hospitals say many infections were caused by the NHS’s lack of beds, old hospital buildings and the decision to run normal services during the second wave.

“It is simply staggering that one in seven hospital patients who developed Covid-19 caught the virus while being treated for another illness. This analysis also reveals deeply alarming regional disparities, with rates of hospital-acquired Covid in the north-west almost twice those in London.”

NHS England does not publish figures showing how many of those deemed likely to have caught coronavirus as an inpatient later died. But experts in hospital-acquired infection pointed out that many of those being admitted for other reasons – such as an operation or after a fall or flare-up of an existing medical problem – are frail and vulnerable and have underlying poor health, so would be more likely to die if they did get Covid.

“It is impossible to eliminate the risks of nosocomial infection, but the huge drive to run parallel Covid and non-Covid care since the summer has inevitably heightened those risks,” said Dr Claudia Paoloni, the president of the Hospital Consultants and Specialists Association.

“Due to years of systemic understaffing and a cost-cutting approach to new hospital design we have far fewer beds available than our European counterparts, which has made it harder to separate out cases and led to an increase in the chances of hospital-acquired infection. Tragically, people will have caught Covid and inevitably died as a result of this shortsightedness.”

NHS staff need proper personal protective equipment to reduce the risk of transmitting the virus at work, especially FFP3 masks rather than just surgical masks, as the former are better at limiting the spread of the new variants of coronavirus, she added.

Stopping the spread of coronavirus in hospitals has been a key priority for hospitals internationally during the pandemic. The Healthcare Safety Investigation Branch watchdog published a report last year which criticised the NHS in England’s track record. Recent research by Public Health England found that 15.5% of all cases of Covid among hospitalised patients had either probably or definitely occurred while they were in hospital.

Three small single-hospital trusts in London have had some of the lowest rates of nosocomial infection in England among acute trusts. Thirteen people since August have caught coronavirus while an inpatient at the Whittington hospital, giving it a rate of just 1%. The North Middlesex and Homerton hospitals have had 66 and 47 such cases respectively, so the rate at each was 4%, the NHS figures show.

Dr Rob Harwood, chair of the British Medical Association’s consultants committee, said: “The NHS went into the current pandemic underfunded, understaffed and overstretched. The knock-on effects – particularly limited bed and workforce capacity – has unfortunately meant that controlling the spread of Covid-19 within hospitals has been more difficult than necessary.”

University hospitals Birmingham trust has had the most cases since August – 1,185. But its size means that those cases represent a rate of 14%, just below the national average of 15%.

Northern Devon healthcare trust said: “We acted quickly to put in place enhanced infection prevention and control measures when needed, including increased inpatient testing to identify any patients with no symptoms.” 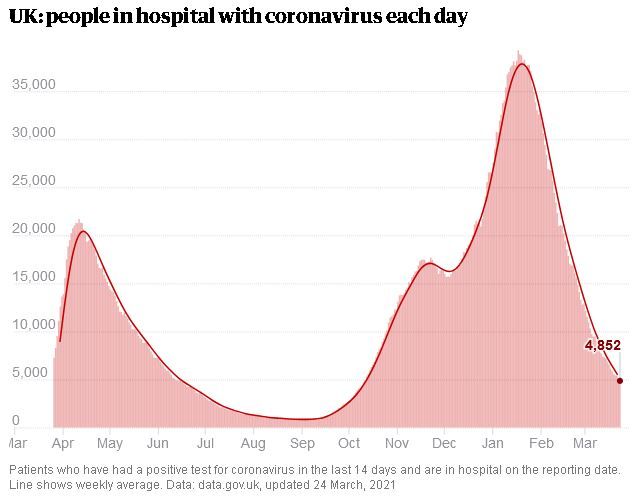 A spokeswoman for the Hull trust cited high local rates of infecton and added: “We are taking all possible steps to reduce the risk of hospital-acquired infections, given the constraints placed upon us by our ageing estate, including the creation of ‘pods’ with floor-to-ceiling partitions, the removal of beds to reduce the risk of transmission, the isolation of patients with the virus and a regular testing regime.”

Lancashire teaching hospitals trust said that it had had a spate of nosocomial infections in November and December when it was very busy and that had led to an increased risk of hospital-acquired infection and affected its average over the year. “We also have an old estate which limits the opportunities for ventilated space,” a spokesman added.

NHS England insisted that the real rate of hospital-acquired coronavirus is 4.5%, not 15%, and blamed high rates of infection in the population. Its statement was based only on cases regarded as “definite” because the person tested positive on or after the 15th day after their admission.

An NHS spokesperson said: “The Office for National Statistics and other data conclusively demonstrate that the root cause of rising infection rates in hospitals is rising rates in the community.

“Since asymptomatic tests kits were made available for the first time by the government’s test-and-trace programme in November, millions of staff have been tested helping to keep infections as low as possible, and all staff have been asked to rigorously follow PHE’s infection control guidance with hospital infection rates currently standing at around 4.5%.”

On Thursday Sir Simon Stevens, NHS England’s chief executive, recommended that the health service reduce the national alert threat level from Covid from four to three because of the recent big fall in the number of people in hospital with the disease. UK hospitals are now looking after 5,407 such patients, a fraction of the 39,249 they were treating on 18 January, at the peak of the pandemic’s second wave.