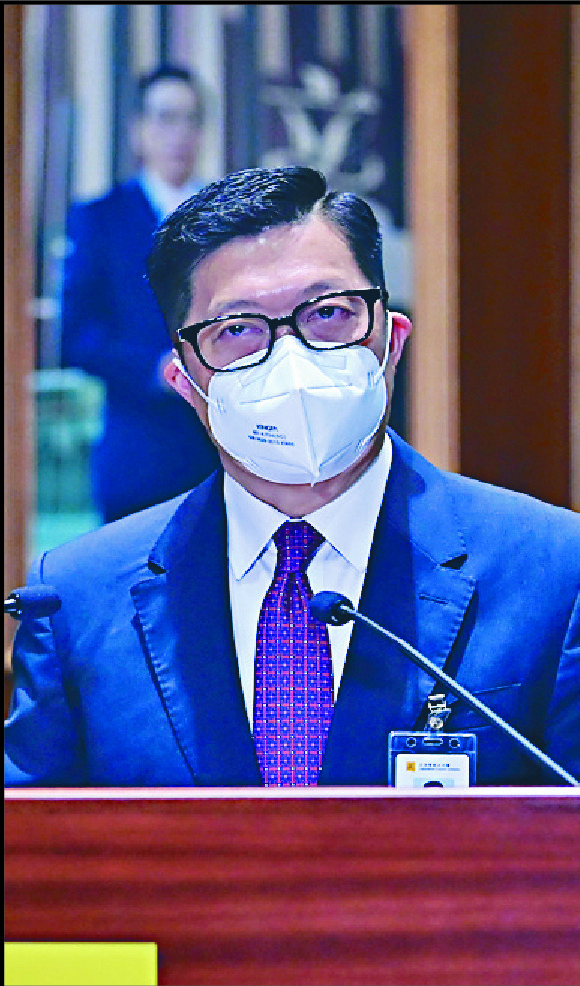 Nineteen people have been arrested for publishing fake news about anti-epidemic measures and inciting others to violate health regulations and to vandalize Covid treatment facilities, Secretary for Security Chris Tang Ping-keung said yesterday.

He told the Legislative Council that false information not only confuses people but also aims at dividing society and compromises public order and national security.

Some people who claimed to have tested positive for the coronavirus on social media platforms flagrantly breached quarantine requirements and advocated those who have been infected go around the city to spread the virus, according to Tang.

"Such inappropriate speech was made with the intention of undermining the government's anti-epidemic work," he said.

"The police will not tolerate such acts and will surely take appropriate enforcement action."

However, Roundtable's Legco member Michael Tien Puk-sun is dissatisfied with the government's way of combating fake news, saying that it is using ancient ways to tackle a modern-day problem.

He called on the SAR administration to pass fake news legislation that only targets anti-epidemic information.

Tang replied by saying that the government thinks the current laws are sufficient to regulate such fake news.

However, Acting Secretary for Home Affairs Jack Chan Jick-chi also said the administration has commissioned a research team to study ways of combating fake news, with detailed proposals to be ready in around one to two months.

He said they have looked into fake news law in the mainland, Singapore, Malaysia, the United States, Britain and the European Union to ferret out loopholes here.

This February, singer Tommy Yuen Man-on and two owners of a Mong Kok Taiwanese drinks shop had been arrested for posting anti-vaccination messages on social media.

Meanwhile, Tang told a press briefing after the council meeting that the administration had yet to start public consultations over enacting an anti-subversion law in line with article 23 of the Basic Law due to the pandemic.

He also said he had not given much thought to the question of whether he would stay on in the next administration, but been only thinking of ways to contribute to society and focusing on his current job at the Security Bureau.

"I have never given any thoughts to what job I will do in the future," Tang said.

The Legco proceedings came as the administration announced that the number of youth crimes had dropped by 269 cases, or 37.5 percent, to 448 in the first quarter as compared to the same period last year.

"One single youth crime is far too many," the government said.

"Youth crime is a complex social issue, which requires different sectors of the community to strengthen collaboration on publicity and education with a view to cultivating youths' law-abiding awareness."
#coronavirus  #covid 19  #covid
Add Comment