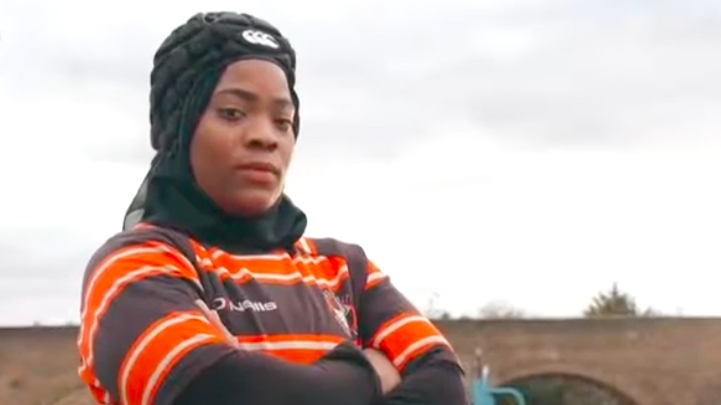 Alema, who currently works as an NHS neonatal nurse, says she’s loved rugby since she was a young girl. She now plays for Barnes RFC in southwest London.

Alema recently sat down for an interview with the House of Rugby podcast, where she shared that her goal is to become the first Black Muslim woman rugby player to play for England.

Rugby is similar to American football.

“I was 14 when I first got my hands on a rugby ball, and I fell in love…I want to be the first Black Muslim woman to play for England. I actually only decided during lockdown,” Alema said.

She said that it wasn’t until college that she ramped up her efforts and decided to take the sport more seriously after playing briefly with the Ealing Trailfinders.

She said the rugby rules and regulations anchored her.

“It said there in Black and white under the clothing section that you can wear a headscarf to play. And for me, it was such a relief because up until that time, I didn’t feel like I belonged just because I didn’t see anyone that looked like me,” said the mother of three.

Despite currently suffering a hamstring injury, Alema continues to train. She hopes to be an inspiration to other women of color.

“I truly believe that if I get in that England shirt, I’m going to open up rugby to a new audience, people that I’m trying to reach out to play rugby will then be thinking, ‘Oh, look at Z, she’s a Black woman, she’s wearing a hijab, she’s playing rugby. Maybe I can give it a go.”