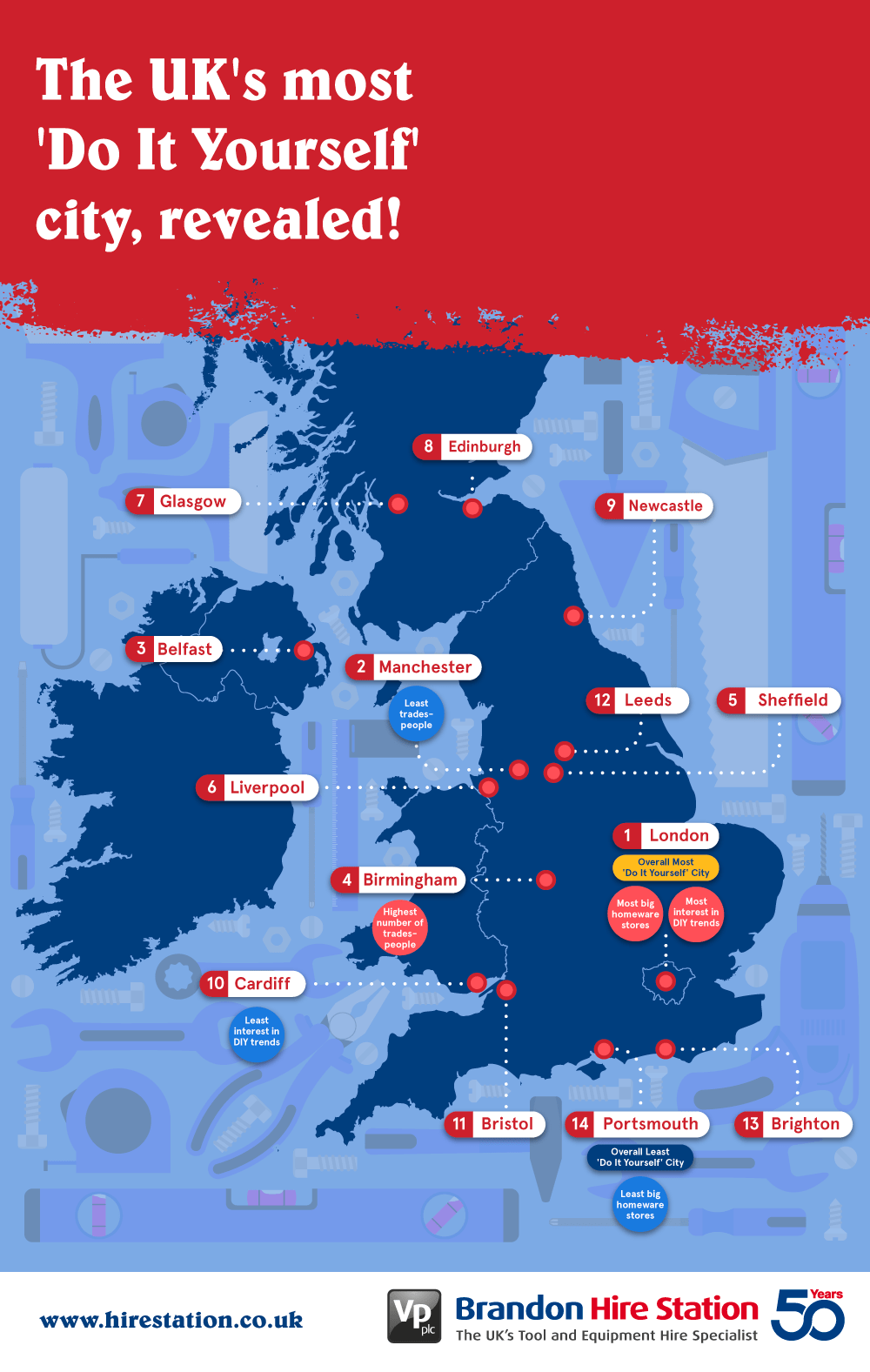 Millions of Brits spent their lockdown hammer in hand, finally tackling those odd jobs around their homes they’d been putting off for years, resulting in a major boom for the DIY industry.

But new research has revealed that you may be more or less likely to attempt a DIY job based on your postcode.

That’s because according to new research London is not only the capital, but also the most DIY minded city in the UK.

The research comes from leading tool and equipment hire specialists, Brandon Hire Station, who ranked different locations across the country using a unique scoring system, in order to determine the UK’s most ‘Do It Yourself’ city.

Each of the cities included were scored against three main criteria; how available materials and supplies were, how easy it was to get a professional to do the job instead and general interest in DIY.

Obviously you can’t attempt a DIY job if you don’t have the necessary supplies or equipment. So in order to determine how easily each city could access the needed supplies, Brandon Hire Station looked into the number of large DIY stores in each location.

Unsurprisingly London came out on top in this category, with double the number of stores available in either Manchester or Birmingham who tied for second place with eight stores.

Five seems to be the average amount you can expect a city to have, with five of the top fourteen cities all having five hardware stores available.

Portsmouth in general scored the lowest in this category with only two big hardware outlets for potential DIY-ers to choose from.

Just Get A Professional To Do It

More often than not, the reason many of us put off the odd jobs around the house is due to a lack of free time to complete them, more than because of a lack of tools or supplies, which is why lockdown resulted in such a DIY boom - and it’s often a lot easier to just call in a professional.

Which is why the more professionals that are available in a location, the less likely that city is to try and do it themselves. Therefore the higher the number of registered tradespeople a city had, the lower they scored.

With only 224 registered tradies, Manchester came out on top closely followed by Edinburugh and Cardiff who both had under one thousand..

Birmingham had just under 4,500 tradespeople which was the most out of any city and over three thousand more than London with 1,349. Interestingly Portsmouth had just under 4,000 registered.

Builders were the most common type of tradesperson out of all the professions included in the data, with just under twelve thousand builders registered across the fourteen cities. Electricians took the second spot with just under nine thousand.

In order to determine the general interest in DIY for each location, Brandon Hire Station looked at the search volume for a number of recent DIY trends, including those that surged in popularity during lockdown such as ‘wood paneling’, ‘pallet furniture’ and ‘garden bar’.

In general London once scored the best with 11,500 monthly searches for these terms in total, and ‘wall panelling’ proved the most popular search term, with 6,600 people Googling this on average every month.

Liverpool took second position, with 2,860 monthly searches across all of the terms, and interestingly people in Cardiff showed the least online interest in DIY trends, with only 180 searches per month for the most popular DIY trends.
Add Comment