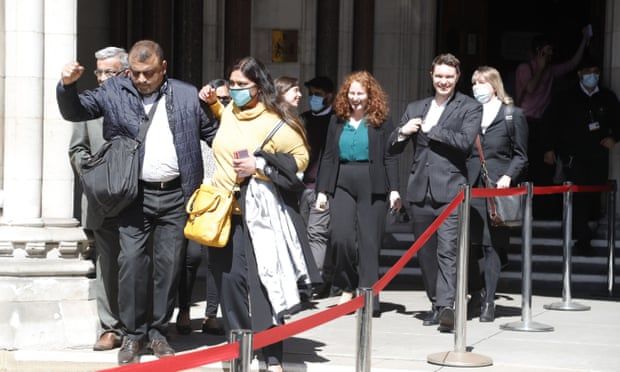 Wrongly convicted Post Office workers to get up to £100,000 interim payouts

Post Office workers who have had their convictions for theft, fraud and false accounting – the result of computing errors – quashed will each get an interim compensation payment of up to £100,000 the government has said.

In a written statement to the Commons on Thursday, the business secretary, Kwasi Kwarteng, said the government was supporting the Post Office to provide the cash before final compensation settlements were agreed.

The announcement came three days after 12 more Post Office workers had their convictions quashed at the court of appeal. Monday’s judgment took the total number of Post Office workers to be cleared to 57. They had been convicted because the defective Horizon IT system falsely suggested there were cash shortfalls.

Campaigners believe that as many as 900 operators may have been prosecuted and convicted between 2000 and 2014, in one of the biggest miscarriages of justice in British legal history. Some of the convicted workers were jailed and lost their livelihoods and their homes. Many went bankrupt – and some died before their names were cleared.

The postal affairs minister, Paul Scully, said: “The suffering and distress these postmasters and their families have gone through cannot be overstated. While nothing will make up for the years of pain they faced after this appalling injustice, I hope this initial step provides a measure of comfort. The Post Office has started to turn a corner in terms of dealing with its past mistakes – and this government will support them in doing so wherever possible.”

The Post Office is contacting the post office operators and will aim to make an offer for an interim payment within 28 days of receiving an application from those whose overturned convictions relied on evidence from the Horizon system, supplied by Fujitsu.

The Criminal Cases Review Commission said it is reviewing more cases, while others have lodged appeals directly with the court of appeal. In May, the Post Office said that it was contacting about 540 people who may have been wrongly prosecuted, and was seeking additional information in another 100 cases. If and when further such convictions are quashed, those people will also be eligible for the compensation payments announced on Thursday, the Department for Business, Energy and Industrial Strategy said.

In April this year, the same month as 39 post office operators had their convictions quashed, the Post Office chief executive, Nick Read, called on the government to fund “meaningful compensation” to those wrongfully convicted, saying the company “simply does not have the financial resources” to do so.

On Thursday, he said: “Ensuring compensation is made as quickly as possible is a priority for Post Office. I welcome the government’s support to enable these interim payments that begin to provide some redress to people who were badly failed. Whilst we cannot change the past, this is an important step towards meaningful compensation for victims and we will offer payments as soon as possible.”

Following a public outcry after the 39 Post Office workers were cleared, in May the government announced it would put the independent inquiry into the Horizon scandal on a statutory footing, meaning it will have the power to compel witnesses and demand evidence, with fines or imprisonment for non-compliance.

The Communication Workers Union has called for criminal investigations into senior Post Office figures who “oversaw the criminalisation of hundreds of postmasters”.
Add Comment