US President Biden, Japanese Emperor Naruhito and New Zealand Prime Minister Ardern will be among the guests for Queen Elizabeth II’s state funeral on September 19.

As Britain mourns the death of its longest-serving monarch, frantic preparations are already underway in London for what is shaping up to be one of the century’s biggest diplomatic occasions.

Hundreds of current and former heads of state and government will join scores of other dignitaries descending upon Britain next week for the state funeral of Queen Elizabeth II, who died Thursday after 70 years on the throne.

The historic church, with capacity for 2,000 people, was the setting for Queen Elizabeth’s marriage to Prince Philip in 1947, and for all but two British coronations since 1066.

Spain is likely to be represented by King Felipe VI, who has blood ties to the British royal family dating back to the 19th century. Members of other European royal families including from Belgium, Denmark, the Netherlands, Norway and Sweden will also travel.

“It would not be surprising if all the crowned heads of state from Europe come, as well as heads of state and heads of government in other countries,” said a former Cabinet minister who was in government at the time of another major funeral, that of former U.K. Prime Minister Margaret Thatcher in 2013.

“This will be a funeral like no other, or few other,” agreed John Kampfner, director of the “U.K. in the World” initiative at the Chatham House think tank. “There have been great state funerals before — of American presidents, of Nelson Mandela and others. But quite simply the queen was the most famous person in the world, and as a result I think there will be an attendance list that will be unprecedented.”

The most notable — albeit unsurprising — absence will be that of Russian President Vladimir Putin, after the Kremlin said his attendance is not an option. In gossipy diplomatic circles, just as important as who’s coming is simply who is receiving an invitation, with embassy officials eager to discover whether Chinese President Xi Jinping will be offered the chance to attend.

Working around the clock

In the meantime, diplomats are fretting over the sheer scale of what is about to unfold.

The preparations for the funeral represent a colossal logistical, security and diplomatic task, with tens of thousands of people expected to travel to London over the coming days. Foreign embassies are already handling hundreds of calls from private citizens enquiring whether it would be possible to land in the capital on the same day of the funeral, and rushing to book flights and accommodation. 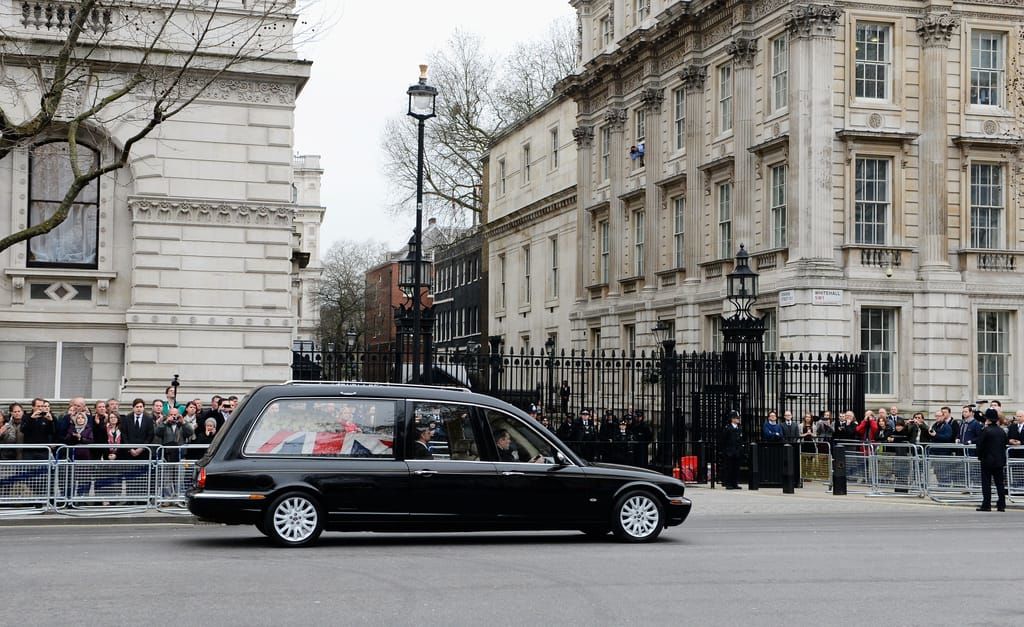 The hearse makes its way past Downing Street during the Ceremonial funeral of former British Prime Minister Baroness Thatcher on April 17, 2013

“It will be a huge challenge from many perspectives: protocol, security, sensitivities,” said Ioannis Raptakis, Greek ambassador to the U.K., who agreed it will be of a similar magnitude to Nelson Mandela’s state funeral in 2013 or the COP26 U.N. climate change summit in Glasgow last year, in terms of the sheer number of world leaders likely to attend.

“Almost every country will make an effort to be represented. But I have full trust in the British protocol experts — they have the experience of organizing COP26 recently, which was like a rehearsal.”

Others are more concerned. “We are very worried about the logistics,” one diplomat said, pointing to a perceived lack of organization during the G7 summit in Cornwall last year.

On the morning of the funeral itself, the queen’s coffin will be carried in a procession to Westminster Abbey from 900-year-old Westminster Hall, where the public will have had several days to pay their respects. The nation will observe a two-minute silence.

After the one-hour funeral service, a large ceremonial procession will accompany the coffin to nearby Hyde Park, where it will be transferred from gun carriage to state hearse. The coffin will then travel 20 miles west of central London, to Windsor Castle.

Following a committal service at St. George’s Chapel in Windsor, the coffin will finally be lowered into the royal vault on the castle grounds, beside that of the queen’s late husband Prince Philip, who died in April 2021.

More than just a funeral

Official protocol dictates that invitations will be offered to the head of state from each country, and their spouse or partner.

The last state funeral to be held in the U.K. took place in 1965, following the death of former Prime Minister Winston Churchill. Dignitaries from an unprecedented 112 countries — including the likes of Dwight Eisenhower, Charles de Gaulle and Queen Elizabeth herself — attended the service at St. Paul’s Cathedral, which was followed on TV and radio by an estimated 350 million people around the world. Despite the funeral being held at the height of the Cold War, the Soviet Union sent its deputy prime minister to attend.

Diplomacy around such events is undoubtedly possible. In 1979, immediately after the funeral of Louis Mountbatten — a relative of the queen who was murdered by the IRA — Thatcher held a summit with her Irish counterpart John Lynch at a time of high tensions between the two countries. The meeting became a “sort of prelude” toward the Good Friday / Belfast peace agreement, according to the former Cabinet minister quoted above.

But Kampfner said that this time leaders will have to proceed discreetly with any private conversations or encounters, with the protocol for a head of state’s funeral stricter than for any other such service — and especially since Queen Elizabeth was no ordinary figurehead.

“All heads of state and others will be very cautious about being seen to be overly engaging in any direct diplomacy on an occasion like that,” said Kampfner. 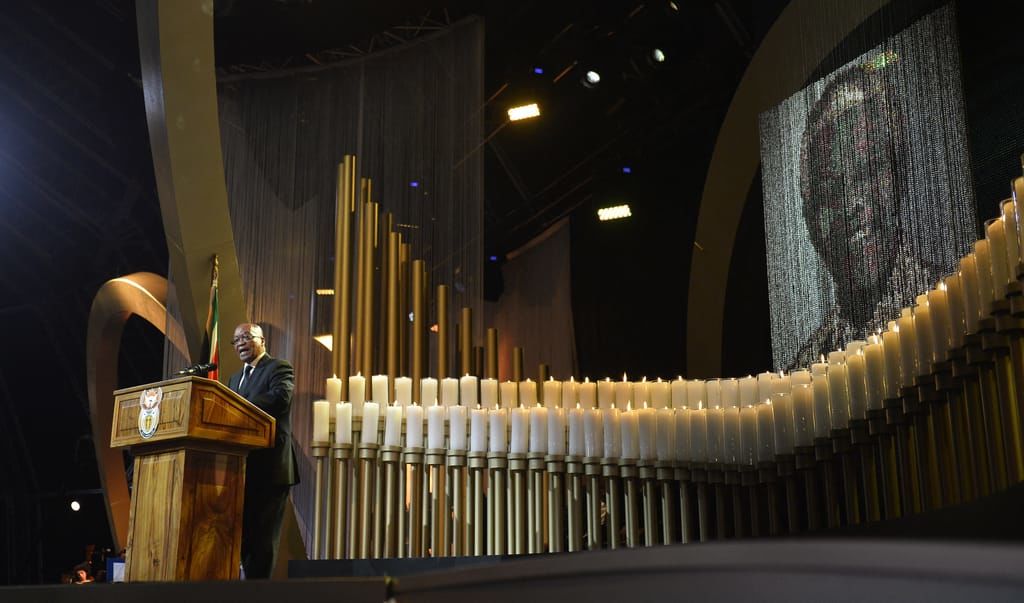 Leaders will also need to be careful not to accidentally overshadow the late monarch, or steal attention with actions that might be considered disrespectful. Memories are still fresh of the beaming selfie taken by former Danish Premier Helle Thorning-Schmidt with former U.K. Prime Minister David Cameron and ex-U.S. President Barack Obama at the Johannesburg memorial service for Mandela.

Nevertheless, what incidental moments there are between leaders will be of keen interest to seasoned observers, Kampfner said.

That was the case with the famous handshake between Obama and Cuba’s Raul Castro at Mandela’s funeral, a brief moment interpreted as evidence of a warming relationship between Washington and Havana.

Truss under the spotlight

For Liz Truss herself, the occasion will offer “polite getting-to-know-you moments” with key leaders which should prove valuable for a prime minister only appointed earlier this month, Kampfer said.

But he warned that the new U.K. premier “won’t want to be seen engaging in any discussions about the many problems that the world faces, because of the sensitivity of the moment.”

Certainly, Downing Street is adamant the U.K.’s 10-day mourning period is to be rigorously observed, which means formal meetings between Truss and other international leaders will not be scheduled until politics resumes. For more substantial conversations, Truss will therefore have to wait for the U.N. General Assembly taking place in New York later that week.

“I would think if a president or a prime minister came up and expressed their real condolences about her majesty and how much she was appreciated, and they talk at that level, they will have a big impact,” said Conservative MP Peter Bone, who attended Thatcher’s funeral.

“If they say — ‘we want a free trade agreement,’ that will be totally inappropriate.”