Presidents, prime ministers, monarchs and leaders around the world have paid tribute to the life and service of Queen Elizabeth II, many of them reflecting on a 70-year reign that encompassed some of the most turbulent and decisive moments in modern British and world history.

As Thursday wore on and news of the Queen’s ill-health eventually gave way to news of her death, global figures spoke of what she had meant to them and their countries.

Among the most frequently invoked words were “duty”, “steadfast” and “constant”, but mention was also made of her sense of humour, and of her life and role as a mother and grandmother as well as a monarch.

The US president, Joe Biden, and the first lady, Jill Biden, said: “Her Majesty Queen Elizabeth II was more than a monarch. She defined an era.” 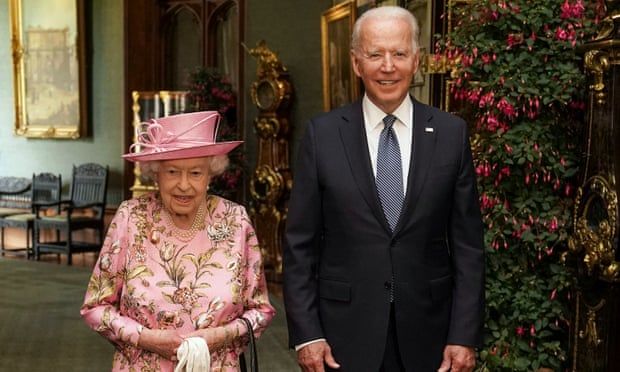 Queen Elizabeth with US President Joe Biden in the Grand Corridor during their meeting at Windsor in 2021.

In a world of constant change, they added, she had been “a steadying presence and a source of comfort and pride for generations of Britons, including many who have never known their country without her”.

The Bidens also noted that the Queen – “a stateswoman of unmatched dignity and constancy” – had “endured the dangers and deprivations of a world war alongside the British people and rallied them during the devastation of a global pandemic to look to better days ahead”.

Minutes after the Queen’s death was announced, France’s president, Emmanuel Macron, posted a simple picture of the Queen on his Twitter account, unaccompanied by any words.

In a subsequent message, he wrote: “Her Majesty Queen Elizabeth II embodied the British nation’s continuity and unity for over 70 years. I remember her as a friend of France, a kind-hearted queen who has left a lasting impression on her country and her century.

“No foreign sovereign has climbed the stairs of the Élysée Palace more often than she, who honoured France with six state visits and met each of its presidents. For her, French was not a mere relic of Norman ancestry that persisted in so many customs, but an intimate, cherished language. The Queen of sixteen kingdoms loved France, which loved her back.”

Russia’s president, Vladimir Putin extended his condolences to King Charles for the “irreparable loss” of his mother, saying the Queen had “rightfully enjoyed the love and respect of her subjects, as well as authority on the world stage”.

He added: “I wish you courage and resilience in the face of this difficult, irreparable loss. May I ask you to pass on sincere condolences and support to members of the royal family and the entire people of Great Britain.”

Ireland’s president, Michael D Higgins, described the late monarch as “a remarkable friend of Ireland” as he offered his condolences to the royal family.

“Her Majesty served the British people with exceptional dignity,” he said. “Her personal commitment to her role and extraordinary sense of duty were the hallmarks of her period as Queen, which will hold a unique place in British history.”

Higgins also paid tribute to Elizabeth II for “laying a firm basis for an authentic and ethical understanding between our countries”, and for refusing to “shy away from the shadows of the past” when she visited the country in 2011.

Canada’s prime minister, Justin Trudeau, called the Queen “a constant presence in our lives” and said his compatriots would always “remember and cherish Her Majesty’s wisdom, compassion, and warmth”.

Narendra Modi, India’s prime minister, said she would be remembered as “a stalwart of our times” who had “personified dignity and decency in public life”.

The president of Pakistan, Arif Alvi, offered his “sincere condolences to the royal family, the government, and the people of Great Britain on the sad demise of Queen Elizabeth II, the second longest-reigning monarch in the history of Great Britain”.

Turkey’s president, Recep Tayyip Erdoğan, said he was saddened to learn of Queen Elizabeth’s death and sent his deepest condolences to the royal family and the people and government of the UK.

New Zealand’s prime minister, Jacinda Ardern, said flags would fly at half-mast and arrangements would be made for a state memorial service.

“I know that I speak for people across New Zealand in offering our deepest sympathy to members of the royal family at the passing of the Queen,” said Ardern.

“To us she was a much-admired and respected monarch, to them she was a mother and grandmother.” 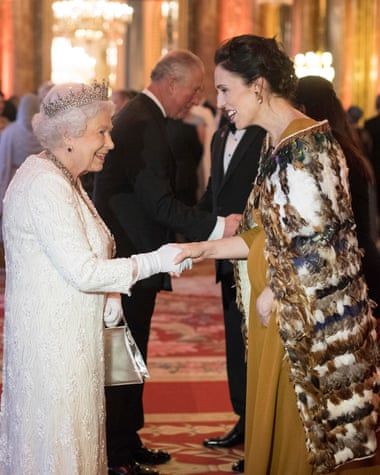 Jamaica’s prime minister, Andrew Holness, expressed his “great and profound sadness”, adding: “We join our brothers and sisters in the Commonwealth in mourning her passing, and pray for the comfort of the members of her family, and the people of the United Kingdom, as they grieve the loss of their beloved Queen and matriarch.”

Holness noted that ever since she was crowned in 1953, Queen Elizabeth II visited the island every decade until 2002. “Undoubtedly, she formed a special bond with the people of Jamaica during her reign,” he said. “We are saddened that we will not see her light again, but we will remember her historic reign.”

António Guterres, the United Nations secretary general, said he had been deeply saddened by the Queen’s death.

“She was a good friend to the UN and a reassuring presence through decades of change,” he said. “Her unwavering, lifelong dedication will be long remembered.”

He also said the Queen had been “a reassuring presence throughout decades of sweeping change” that had included the decolonisation of Africa and Asia and the evolution of the Commonwealth.

Italy’s prime minister, Mario Draghi, expressed his condolences, describing the Queen as “the absolute protagonist of world history for the past 70 years” and a woman who had represented the UK and the Commonwealth with fairness, balance, wisdom and respect.

“She guaranteed stability in times of crisis and has been able to keep the value of tradition alive in a society in constant and profound evolution,” he added.

Pedro Sánchez, the Spanish prime minister, paid tribute to “figure of global significance, a witness and author of British and European history”, while the Dutch prime minister, Mark Rutte, remembered a monarch who had “combined a strong sense of duty and unflinching resolve with a light touch and a sense of humour”.

The Ukrainian president, Volodymyr Zelenskiy, spoke of his “deep sadness” at the news, saying the UK and the Commonwealth had suffered “an “irreparable loss” and offered his thoughts and prayers.

In a letter to King Charles III, the head of the European Commission, Ursula von der Leyen, expressed “sincere condolences on behalf of the European Union”. She added: “Her reign defined the history of your nation and our continent. She symbolised the best of the United Kingdom, its people and its values. She meant so much to so many and, on a personal note, has been an inspiration throughout my life.”

“Her Majesty was an extraordinary and world-renowned public figure who lived a remarkable life. Her life and legacy will be fondly remembered by many around the world,” Ramaphosa said. “The Queen’s commitment and dedication during her 70 years on the throne remains a noble and virtuous example”.

The president of Ghana, Nana Akufo-Addo, said the Queen had brought “elegance, style and sheer joy” to her duties” and kept the Commonwealth “sturdy and true”.

Other European monarchies offered their sympathies and shared their memories.

The royal house of Norway said it was “deeply saddened at the news’”, while the Dutch king, Willem-Alexander, said the “steadfast and wise” Queen had dedicated her long life to serving the British people.

“We feel a strong bond with the United Kingdom and its royal family, and we share their sorrow at this time,” he added.

King Philippe and Queen Mathilde of the Belgians said: “We will always keep fond memories of this great lady, who throughout her reign, showed dignity, courage and devotion … The United Kingdom has lost an exceptional monarch who left a deep mark on history.”

King Felipe of Spain said in a message addressed to King Charles III: “Deeply saddened by the sorrowful news of the passing away of Her Majesty Queen Elizabeth II, your beloved Mother, I would like to offer Your Majesty and the British people, on my behalf and on behalf of the Spanish Government and people, our most heartfelt condolences.

“Her Majesty Queen Elizabeth has undoubtedly witnessed, written and shaped many of the most relevant chapters in the history of our world during the last seven decades. Her sense of duty, commitment and a whole life devoted to serving the people of the United Kingdom and Northern Ireland set an example for all of us and will remain as a solid and valuable legacy for future generations. Queen Letizia and I send Your Majesty and the whole Family our love and prayers. You are all in our hearts and thoughts. We will miss Her dearly.”

The Queen’s death also elicited tributes from former world leaders. Barack and Michelle Obama celebrated a reign “defined by grace, elegance, and a tireless work ethic, defying the odds and expectations placed on women of her generation”. 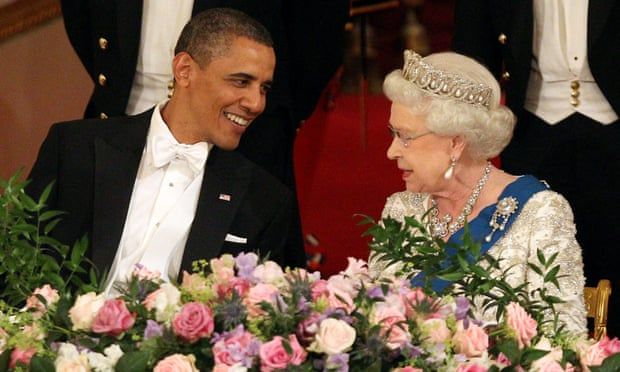 Barack Obama speaks with Queen Elizabeth during a state banquet at Buckingham Palace.

Obama’s successor, Donald Trump, said the monarch’s “historic and remarkable reign left a tremendous legacy of peace and prosperity for Great Britain”, while the former US president George W Bush called the late queen “a woman of great intellect, charm, and wit”, and said Americans had always appreciated her “strong and steadfast friendship”.

As night fell across Europe on Thursday, the mayor of Paris, Anne Hidalgo, announced the lights of the Eiffel Tower would be switched off in tribute to the Queen.