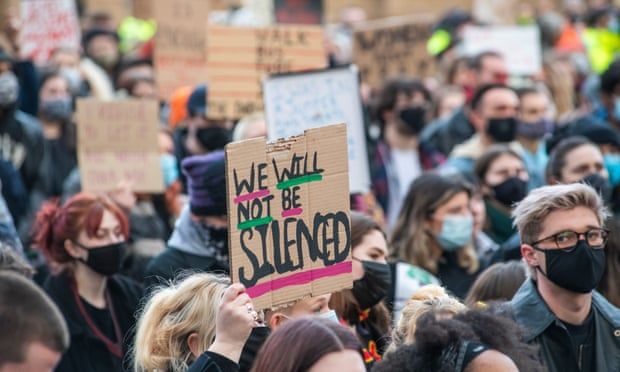 Women will not be silenced on gender violence

Campaigners including the actor Maxine Peake, the Labour MP Bell Ribeiro-Addy and the Green party deputy leader Amelia Womack write in support of the aims of the group Women Will Not Be Silenced

We believe that sexist attitudes and contempt for women run through the fabric of society, and we are angered and upset by the fact that every three days a woman is killed by a man in the UK. Women are raped, beaten and murdered by our own partners, husbands, brothers and fathers, as well as by complete strangers. The domestic abuse services we need are being defunded and shut, and the selling of social housing stock means women at risk of violence in the home have no safe alternative long-term accommodation for themselves and their children. Rape is effectively being decriminalised in this country and this is as unacceptable as it is disturbing.

The Metropolitan police use heavy-handed tactics to silence people, as was clearly demonstrated during the Clapham Common vigil on 13 March. We are appalled by the behaviour of the Metropolitan police. As opponents of violence against women, we have a human right to gather to show solidarity and support to one another. It is clear to us that the police cannot be allowed to have absolute power over the right to freedom of association, and we are calling for united opposition to the policing bill because we believe that this will have a detrimental impact on our human rights and civil liberties as women.

Our demands are as follows: investment in domestic abuse services, rape crisis support, the NHS and other vital care and support services for women; investment in social housing for women and children at risk of domestic abuse; and an immediate and urgent inquiry to the unacceptably low conviction rates for rape and the systematic failure of the criminal justice system to provide justice for women.

With regard to policing in the UK, we demand that a full apology is issued by the Metropolitan police for the events on Clapham Common; a full external inquiry is opened into the attitudes and behaviour of the police force towards women; and that the policing bill is dropped and our right to protest is upheld.