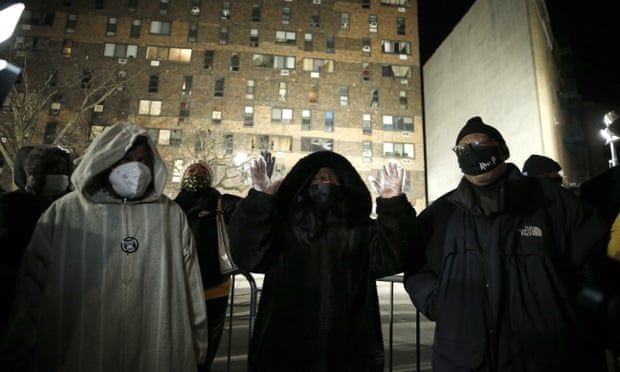 Why is New York City’s mayor blaming tenants for the deadliest fire in decades?

By focusing on personal responsibility over open doors, the mayor is ignoring the neglect that led to this tragedy

On Sunday, the deadliest New York City fire in three decades tore through a Bronx apartment building, killing at least 17 people. Among the dead were children as young as four and five.

The New York City fire department blamed a space heater and a malfunctioning door for allowing smoke to spread through building. The door was “not functioning as it should”, said Dan Nigro, the FDNY commissioner. Residents told reporters on the scene that their doors often didn’t shut like they were supposed to.

“That was embedded in my head as a child watching the commercials over and over again,” Adams said. “We’re going to double-down on that message … muscle memory is everything and if we can drill that in, we can save lives by closing the doors.”

The story of the Bronx blaze, however, is not one of personal responsibility. It has little to do with tenants remembering to shut doors. Future tragedies won’t be avoided through “muscle memory” alone.

By blaming individual actors, Adams instead allows the true culprits off the hook: the building owners. Why did a tenant need to use a space heater? Why were the doors so faulty?

It’s notable that one of the owners of the Bronx building, Rick Gropper, is a member of the Adams transition team, a landing space for those who are likely to have influence over the new administration. At least six violations, over the years, have been slapped on the building owners from the city’s department of housing preservation and development. Multiple violations cited problems with the doors, which are supposed to shut to prevent the spread of fire and smoke.

Heat, as any working-class tenant knows, was another major problem. One tenant told the New York Post that “they’re sending up just enough heat to say they’re sending up heat, but it’s not enough to keep you warm, and if you don’t use a space heater, then you use your oven”.

“You can’t lounge around without a housecoat on.”

The systems in place seeded this disaster. It was not one person who decided to use a space heater or another who couldn’t close the door. Apartment building doors should close on their own. Space heaters, in 2022, shouldn’t be required in the dead of winter if building owners are paying to send up sufficient heat. This is the message Adams, the new mayor, should have been emphasizing: such underinvestment and neglect should be unacceptable in America’s richest city.

But it remains so – the status quo, distressingly, is a stratified reality where some dwell in million-dollar condos and others suffer on the city’s margins, hoping not to freeze on the way to bed or die in a fire the next day. Investors do not buy buildings to keep people housed; they own to make money, and when collecting rent from working-class tenants, services are trimmed to drive profit margins. Why send up a generous amount of heat when a little will do? Why pay to fix a door when, until a fire kills 17 people, the day-to-day is merely tolerable?

Elite neglect is at the root of the devastation. The sort of neglect that forces tenants, many of them immigrants, to haul space heaters into apartment buildings that should be generously pumped with heat. Neglect that allows millionaire building owners to shrug off multiple department of housing preservation and development complaints.

A different kind of mayor would challenge the real estate industry, immediately, to do better. But New York has not had that mayor in a very long time, if ever. Even Bill de Blasio, the self-identified progressive, allied closely with the city’s largest developers and took millions of dollars from them. Adams, a former Republican, is far less tenant-friendly than De Blasio. Landlords now have a dear friend in City Hall.

A simple “close the door” campaign, which Adams will be happy to embark on, is exactly what men like Rick Gropper want. More children and adults obsessing over their alleged culpability in crumbling apartment towers will mean a real estate investor class that gets to keep doing what it is has always done – cut corners to drive profits. Yes, educating the public about fire safety is important, and must continue. But if the root causes of the carnage are not identified and bad actors are not named, little will change. Now, 17 people are dead who didn’t have to die.
Add Comment