Trains are set to be disrupted yet again on Friday, as rail workers in the RMT union begin their second 48-hour strike this week.

The advice to rail passengers remains to travel only if "absolutely necessary", with four out of five trains set to be cancelled.

Network Rail said about 20% of Britain's usual train services are expected to run under the reduced strike-day timetable in place on Friday.

Driving examiners and road workers are also striking in some parts of the country.

Strike action by the UK's largest rail union, the RMT, resumes again, with the second 48-hour walkout this week beginning on Friday and continuing on Saturday.

The action is part of a long-running dispute over pay, job security and conditions.

Some areas will have no trains at all and services that do run will start later and finish much earlier than usual, typically running between 7:30am and 6.30pm on the days of the strike.

Chiltern Railways is not running any trains at all on Friday.

The advice is to avoid taking trains on Friday if you can, but if you must travel:


*  Allow extra time for your journey

Sunday is the only strike-free day on the railways this week, but services are not expected to get back to normal until Monday 9 January.

Driving examiners in the Public and Commercial Services (PCS) union are striking at test centres in London, south-east England, south-west England and Wales.

The action means some practical tests will not take place, although theory tests should go ahead.

If you are due to take your driving test on Friday, you can check here whether your test centre is one of those affected. But unless you are told your test is definitely cancelled, you should still turn up. Not all driving examiners are members of the union backing the strikes, so your test may take place as planned.

If your test is cancelled because of the strike, the DVSA will automatically rebook your test for you.

Some National Highways workers in the East Midlands and eastern England are striking on Friday. The action involves control centre staff and traffic officers who deal with the aftermath of accidents.

The PCS union says about 16 workers in the two regions are walking out.

National Highways says the strikes have caused "minimal" impact so far, adding that it has "well-rehearsed resilience plans in place".

However, it warns roads in general could be busier than usual because of the walkouts taking place on the railways. 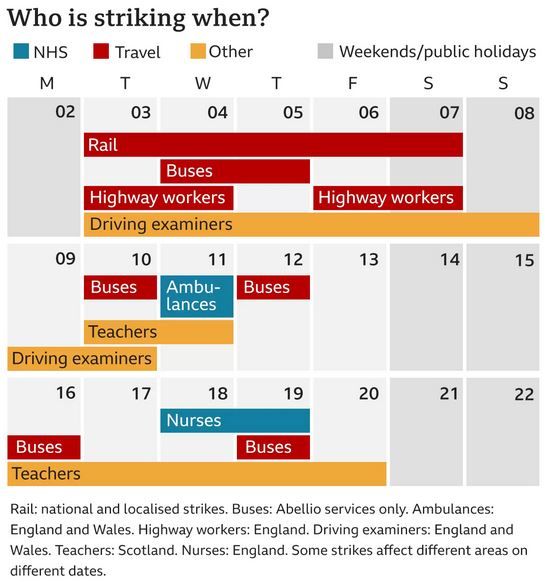