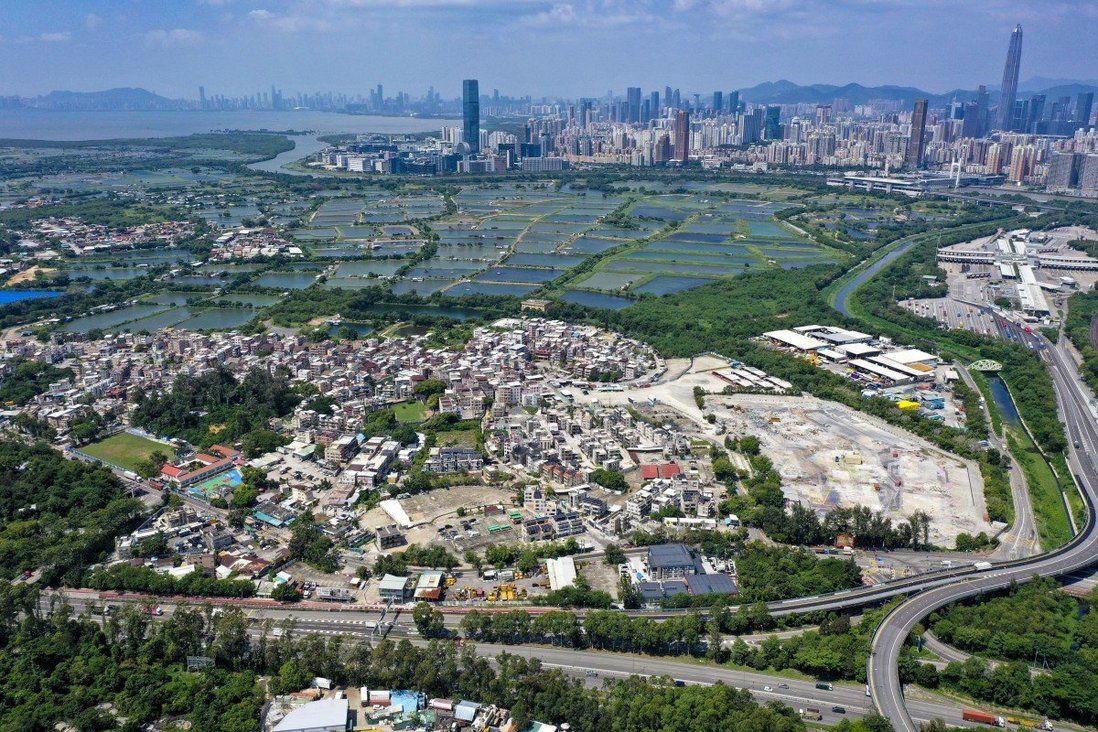 When will Hong Kong’s new land plans actually be completed?

Chief Executive Carrie Lam highlighted several major projects in her policy address but most are still being studied and do not have a timeline for completion.

Most of the land earmarked to plug a shortfall of 3,000 hectares in space-starved Hong Kong over the next 30 years is unlikely to be available for at least a decade, with projects facing hurdles such as financing uncertainties and potential local objections.

Chief Executive Carrie Lam Cheng Yuet-ngor highlighted several major projects in her policy address on Wednesday but most are still being studied and do not have a timeline for completion.

She also revealed that Hong Kong faced a shortfall of 3,000 hectares of land for housing, economic and recreational developments over the next three decades to 2048 – much higher than an initial estimate of 1,200 hectares in a long-delayed review of a planning study. However, Lam declared that enough sources of land supply had been identified, including a proposed Northern Metropolis near the border with mainland China. 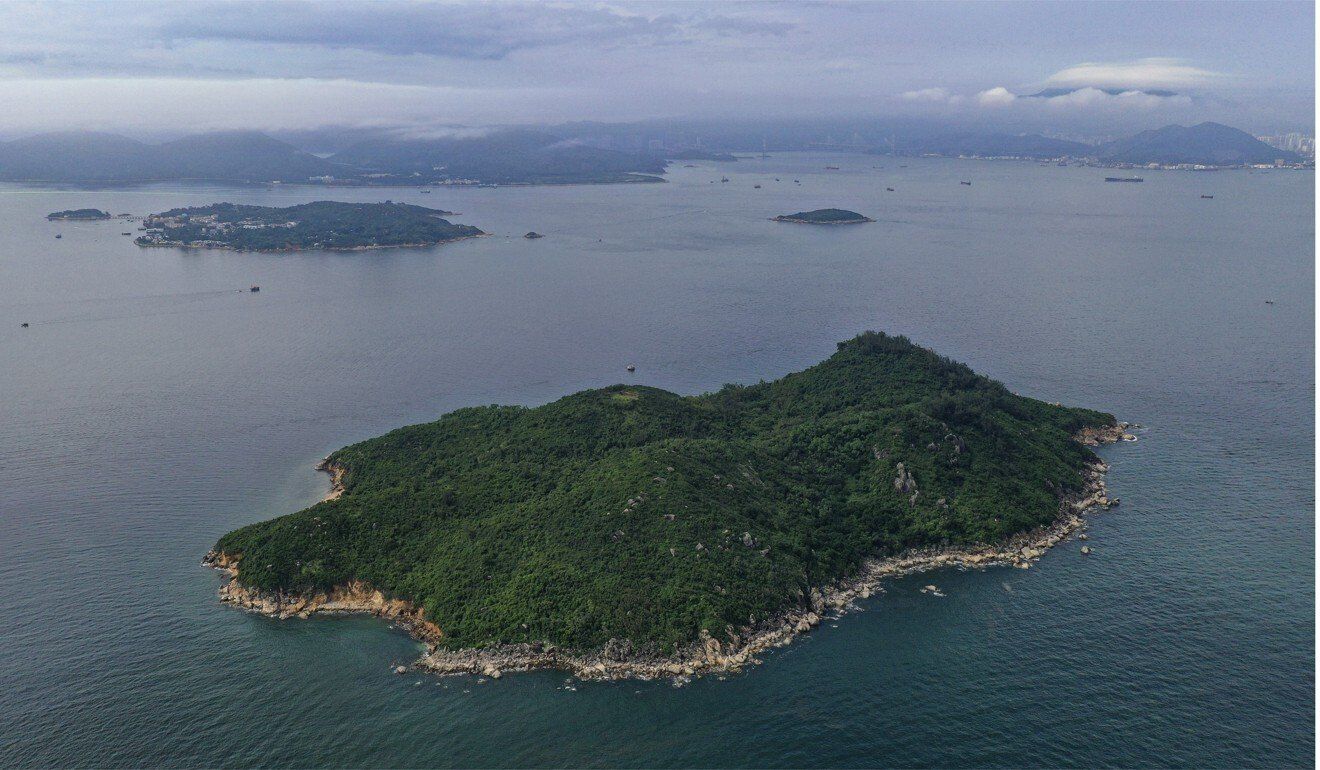 A mega reclamation project is planned for waters off Lantau.

The supplement of her policy address lists 14 projects in the next 30 years which will yield more than 4,000 hectares of land. But a check by the Post found that only two schemes – the Lantau Tomorrow Vision and San Tin/Lok Ma Chau development node – had a clear time frame for the first population intake. No information was available on the other projects, as most were being planned or had yet to receive funding.

“We will be able to deliver,” a government source said. “Some projects are under study, some will be taken to the Legislative Council for funding requests next year.”

Making up half the area is the proposed metropolis, which can provide up to 926,000 flats – including the existing 390,000 homes in Yuen Long and North districts – for 2.5 million people upon full development in 20 years.

The mega scheme, which will feature an innovation and technology corridor as its engine, is considered a major strategic change for development, moving the urban centre north to integrate Hong Kong into the latest national development plan.

But no detailed timeline was given for implementation of the plan, which combines four existing new towns and six development areas in the New Territories. 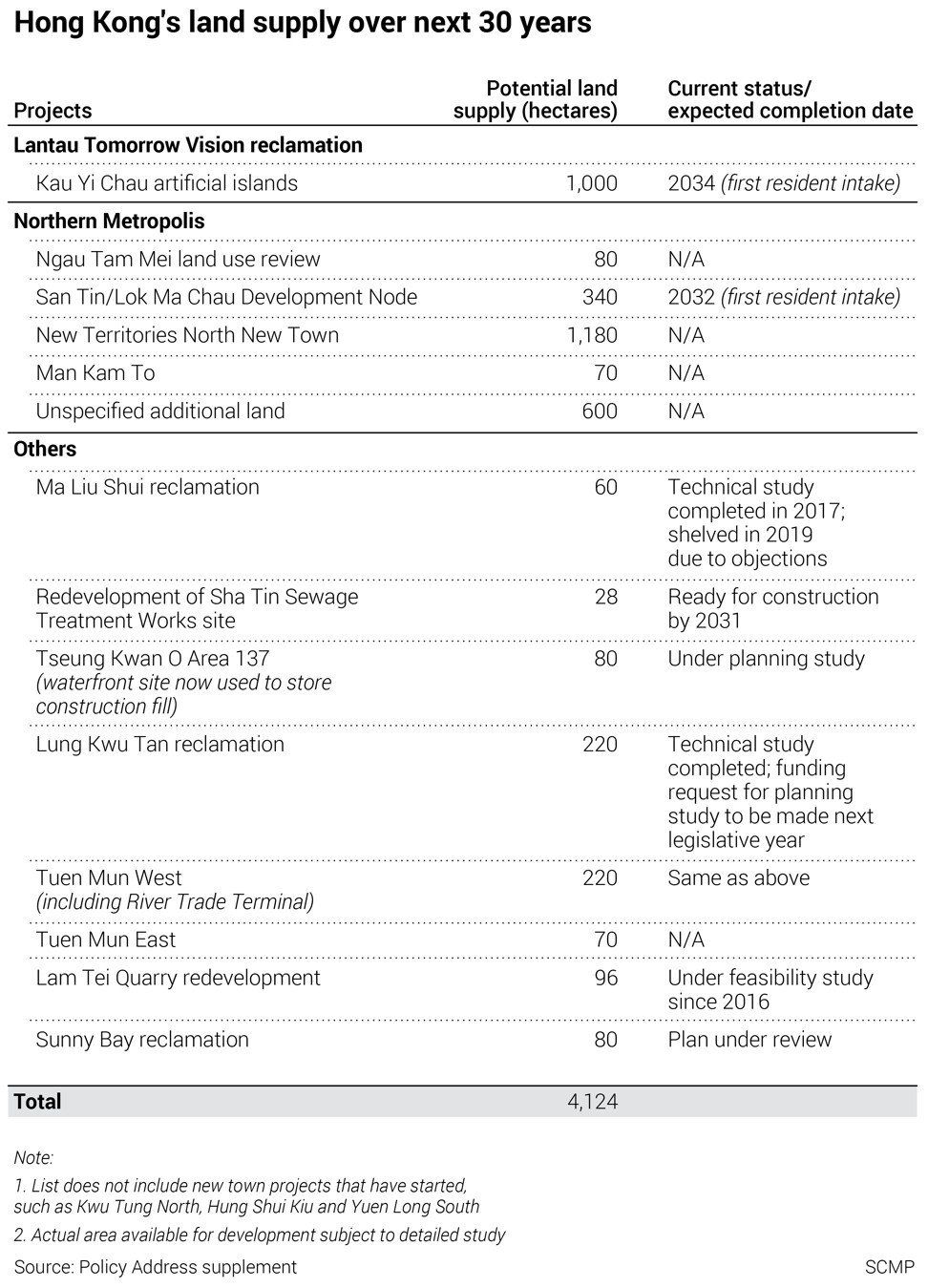 Another sizeable project, the first stage of the Lantau Tomorrow Vision – a massive reclamation scheme in waters east of Lantau Island envisioned as the city’s third economic hub – will produce 1,000 hectares. But the first residents are not expected to move in until 2034.

A feasibility study on the controversial project was commissioned in June this year and will only be completed in 3½ years.

Surveyor Lau Chun-kong, who sat on a now-defunct land supply task force, said it was possible to plug the massive shortfall with developments planned alongside new infrastructure projects.

“The government is able to plan more developments because it’s putting in new railway lines. This is where the extra land is coming from. Railways and other transport infrastructure are a must for high-density development,” he said.

The Northern Metropolis would involve a new cross-border railway linking the city to the Qianhai economic zone in Shenzhen, and an extension of four local rail links that would stimulate development across Hong Kong’s rural hinterland.

However, Lau noted that most of the projects were long-term land supply solutions that would not address short-term needs.

“It takes a long time to move from the planning stage to construction and finally to when the site can be used, but at least the government is finally doing it,” he said.

Another project involves reclamation at Ma Liu Shui, a prime waterfront site in Sha Tin that would provide 60 hectares of land. The project was put on hold in 2019 after facing strong local resistance.

Also facing potential objections is a reclamation project in the Lung Kwu Tan area of Tuen Mun, the home turf of Kenneth Lau Ip-keung, chairman of influential rural affairs body the Heung Yee Kuk. Last week, Lau warned that villagers would object to plans to reclaim the shoreline near their homes. 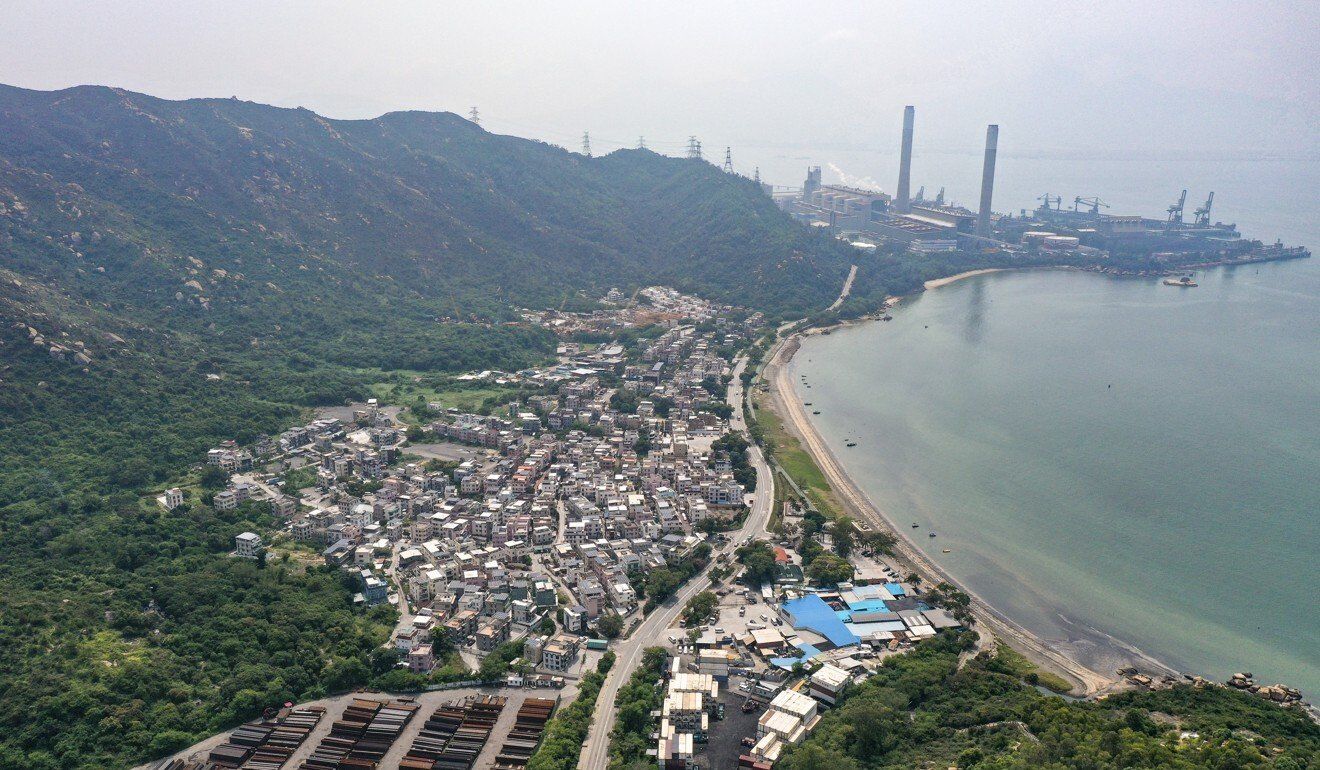 Villagers may object to reclamation at Lung Kwu Tan in Tuen Mun.

Brian Wong Shiu-hung, a member of land concern group Liber Research Community, questioned whether it was necessary to develop all 4,100 hectares identified.

“The government has been changing the narrative about Hong Kong’s land issues to fit its own agenda. At first there was a ‘land shortage’ to justify a massive reclamation project [off Lantau],” he said. “Now they want to fit in Beijing’s directive [on national development], they are changing their strategy to say there is a huge demand for land to build an IT hub.”

He said the land supply task force, which recommended eight options back in 2018, drew its conclusions based on scientific estimates including population forecasts.

“But I don’t see such an approach being used this time,” he said, adding that population growth would slow in coming years according to earlier official forecasts.

“We don’t even know if the two biggest projects, the Lantau Tomorrow Vision and the Northern Metropolis, can be built. Are they financially feasible?” Wong said.

“What we need right now is public housing. These two massive schemes are long-term land solutions and cannot address our most pressing needs.”

The port – located in the northwestern part of the harbour with nine container terminals and 24 berths – has for several years been eyed for its potential to help ease the housing crisis.

“No one is talking about moving the terminal, we cannot relocate them before we identify a suitable place for relocation. We cannot give up our position as an important international entry port,” she told lawmakers during a question and answer session on Thursday.

The chief executive, meanwhile, had raised eyebrows on Wednesday during a television forum when she addressed the problem of subdivided flats.

Lam said she would not use the words “say farewell to subdivided flats” because some were quite big and there were younger people who preferred more privacy choosing to live in them.

But she added some subdivided units were in very poor environments and she had visited those flats and felt “responsible”. She pledged to work hard to implement a policy that would help the residents.

Hong Kong is the world’s least affordable residential property market, and Beijing has called the city’s housing shortage a deep-seated problem that must be addressed.

The State Council’s Hong Kong and Macau Affairs Office director Xia Baolong recently set a target of 2049 for the city to “bid farewell” to subdivided flats and cage homes.