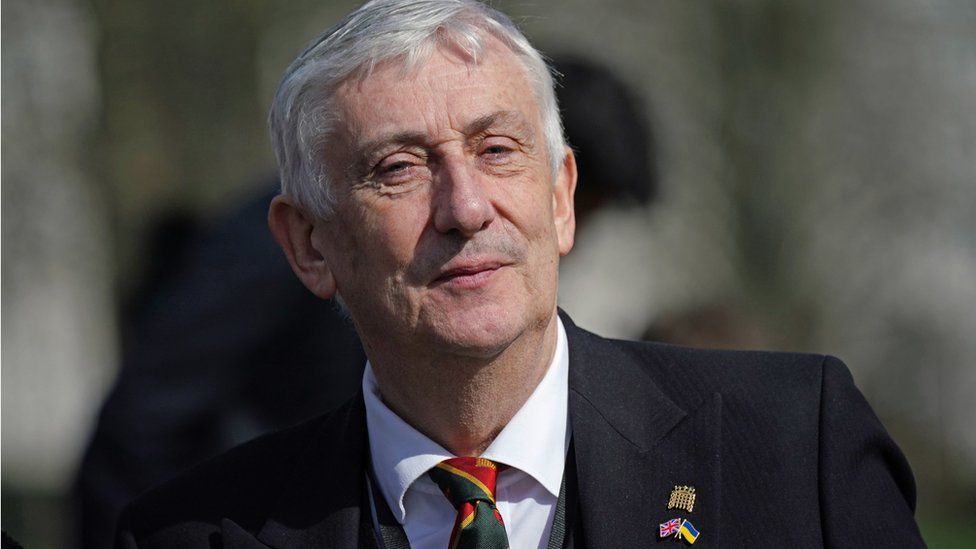 Senior MPs have called for a drastic overhaul of Westminster's culture, amid concerns over sexism and inappropriate behaviour by politicians.

And former Leader of the House Dame Andrea Leadsom called for Parliament to get its own human resources department.

The calls for change come as a number of MPs are facing claims of bullying and sexual misconduct.

Business Secretary Kwarsi Kwarteng told the BBC he did not think the Commons was a dangerous place in general for women to work, but said there were some "bad apples" who had to face consequences.

Politicians' behaviour has come under greater scrutiny in recent weeks, with several revelations and claims of wrongdoing.

On Saturday, Conservative MP Neil Parish resigned after admitting he had watched pornography twice in Parliament.

He told the BBC it had been a "moment of madness" and what he had done "was absolutely, totally wrong".

Mr Parish's resignation will trigger a by-election in his constituency of Tiverton and Honiton in Devon, which is a safe Conservative seat.

Tory MP Dame Andrea - who in 2018 spearheaded the creation of the Independent Complaints and Grievance Scheme (ICGS), to which Mr Parish's case had been referred - told the Sunday Times she believed it was not fit for purpose.

She explained this was because it had not been able to employ enough investigators, meaning it took "too long" to deal with cases.

What people in Neil Parish's constituency are saying

There's a sense of relief in Tiverton and Honiton that Mr Parish has resigned, with even some loyal supporters saying his position had become untenable. Many feel his indiscretions have brought shame on the constituency.

But many voters seem sorry to see Mr Parish go, after an otherwise impressive political career. One man told me he'd written to the MP to thank him for his decade of service.

Nobody, however, is arguing that his actions were appropriate or acceptable.

With the by-election looming, I suspect, based on conversations, that few Tories would withdraw their support for the party because of Mr Parish.

But some said they were looking elsewhere because of dissatisfaction with the government.

Meanwhile, Sir Lindsay questioned whether MPs should be employers of their own staff and asked whether an outside body could act as employer, as long as the MP was still able to choose their office personnel.

He said work was under way to establish a Speaker's Conference - a cross-party investigation into the issues involved - as soon as possible.

"I take recent allegations of bullying and sexual impropriety, comments and advances, very seriously," he added.

But Labour MP Chris Bryant, who chairs the Commons Committee on Standards, said Sir Lindsay's idea "wouldn't address any of the issues we've faced this week".

He told BBC Radio 4's Broadcasting House that a "culture of impunity" was "the real problem in Parliament".

Mr Bryant said that one MP who had abused him "15, 18 years ago" was still in Parliament, but added: "I dealt with the situation back then. I don't feel the need to pursue anything."

Labour leader Sir Keir Starmer told Sky News his party was "happy to participate" in a Speaker's Conference, saying: "There's a cultural issue that we have to get to grips with. Cultural change has to be led and modelled from the top."

And Liberal Democrat leader Sir Ed Davey told BBC One's Sunday Morning that Parliament collectively had to "step on this misogyny and sexism".

"We need to make women and girls considering coming into politics know that they will feel safe and respected."

Asked whether the Commons was a safe place for women to work, Mr Kwarteng told Sunday Morning: "I think it is. I think you've got to distinguish between some bad apples, people who behave badly, and the general environment.

"It's very similar to when people say, 'Oh well, there are a number of racist people in this country, so that means the whole country is racist.' That doesn't follow.

"There are some bad apples. There are people who've acted very badly and they should be held to account."

Multiple claims of bullying and sexual impropriety have emerged recently, with it being widely reported that 56 MPs have had allegations of sexual misconduct against them referred to the ICGS.

But, in letter, the IGCS warned against "speculation" over numbers.

It said its latest internal figures showed a "similar trend" to those for the year 2020-21, during which it had dealt with 15 cases against MPs for bullying, harassment or sexual misconduct.

At the beginning of April, Conservative MP David Warburton was suspended from the party pending an investigation into alleged sexual harassment.

Cabinet minister Anne-Marie Trevelyan said last week that she had once been "pinned up against a wall" by a male colleague and been subjected to misogyny and "wandering hands" on several occasions.

Labour former cabinet minister Liam Byrne is due to be suspended for two days from the Commons for bullying a former staff member.

And Tory MP Imran Ahmad Khan resigned from Parliament after being convicted of sexually assaulting a 15-year-old boy.