Cambodians go the polls on Sunday to choose new local leaders and a new opposition party aims to chip away at the dominance of ruling party of Prime Minister Hun Sen.

Cambodia goes to the polls on Sunday in nationwide local elections after a two-week campaign that hinted at a return to a more contested political environment in the southeast Asian country.

The opening rally on May 21 was a familiar one in the capital of Phnom Penh: noisy processions of cars, trucks, motorised rickshaws and motorbikes, with people on loudhailers calling for everyone to vote in the elections.

Cambodians will be selecting local leaders in each of the country’s 1,652 communes, but they are mindful of the political crackdown that followed the last vote and led to the dissolution of the main opposition party, the Cambodian National Rescue Party (CNRP), which performed particularly strongly.

Despite that, a new opposition force – the Candlelight Party – appears to be on the rise and as campaigning got underway, thousands turned up to show their support.

“We feel great – it’s been a long time, five years, but we’re back,” said Say Sovann, 42, a Candlelight candidate from a Phnom Penh commune, speaking to reporters as campaign music blared around him at a staging point on the outskirts of the city. “The main thing is we want to survive. The voters are the same, and they have complaints, they have been suffering.”

Candlelight is a rebrand of the Sam Rainsy Party, so named for the longtime opposition leader and former CNRP president who lives in official exile in France but still maintains a considerable following back home.

In 2012, his self-named party merged with the Human Rights Party of Kem Sokha to form the CNRP.

Candlelight leaders have been cautious to separate themselves from Rainsy, a longtime foe of Hun Sen who CPP figures have accused of “terrorism”. But members acknowledge that his history with the party has helped it stand out among the crowd, and the party’s roster includes many political veterans of the CNRP’s campaign. 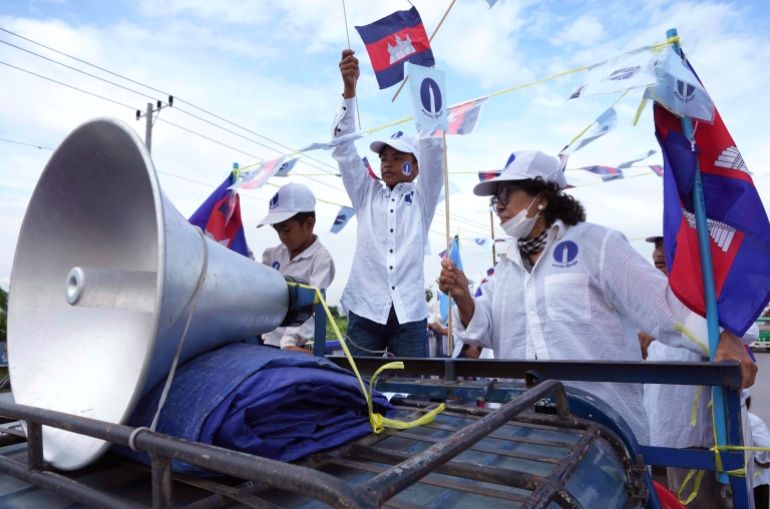 Cambodia’s main opposition party was forcibly dissolved in the wake of the last commune elections in 2017. Now a new opposition force, the Candlelight Party, hopes to win support despite the near total dominance of Hun Sen’s Cambodian People’s Party

Since last November it has out-campaigned the country’s many smaller parties to emerge as a sort of resurrected CNRP – a single party posing a challenge to the CPP.

Still, while many of the key characters of the Cambodian political world remain, the stage has changed dramatically in the past five years, says Astrid Norén-Nilsson, a lecturer at Lund University in Sweden.

“Domestically, the rules of the game have been changed at breakneck speed,” said Norén-Nilsson, a long-term researcher of Cambodia’s political system.

As Hun Sen consolidated power, it was not only the high-profile opposition leaders who were targeted. Criminal charges were also brought against members and supporters of the CNRP, while civil society found its ability to operate increasingly restricted.

Although Norén-Nilsson believes Candlelight could succeed in opening some political space, she says the dissolution of the CNRP and the non-competitive elections that followed in 2018 marked a total reset of the national dynamic.

“The mandate period that followed has been spent carving out a new political order,” she said, adding the ruling party has rigorously pushed out a new set of norms to legitimise its domination. “The CPP has been remarkably successful in changing the parameters of political space in a very short time – to the point that even if competitive politics are allowed back, there will be a changed conception of what the opposition is there to do, and should be allowed to do.”

Since it was formed last year, Candlelight has effectively tapped into a national network of former members and supporters of the CNRP.

It is running more than 23,000 candidates for commune positions across the country, more than twice as many as the next opposition party. Even after Cambodia’s National Election Committee (NEC) stripped 150 party candidates from the ballot, citing irregularities such as signs of illiteracy or mishandled registration, Candlelight is still running in 1,623 of the country’s 1,652 communes.

Candlelight president Teav Vannol, a former Sam Rainsy Party senator, says the party’s leaders felt they had no real choice but to run. The alternative was to cede the country’s governance entirely to the CPP.

“They had nothing to do, [they] were waiting in the villages facing persecution,” said Vannol of the new membership. “That’s why they were happy to have a party, to have a voice again – to express their frustrations.”

Local commune elections, which come a year before national parliamentary elections, can be difficult for any opposition party.

In 2017, the CNRP won about a third of the country’s communes, while the CPP dominated the contest. That result was still considered a success, however, and was widely seen as an excuse for the party’s eventual disbanding by the Supreme Court, an institution headed by a CPP member and often criticised as politically compromised.

Some Candlelight leaders have publicly spoken of concerns about being dissolved if their party does too well.

Vannol was reluctant to focus on the possibility ahead of the election. On the weekend before the polls, he said the campaign had been going well, although the public response was quieter than it was in 2017.

“There’s been less participation, but some good signs,” he said. “I think intimidation has played a factor, not wanting to be seen by public officials showing support.”

Looking at the past showing for the CNRP, Vannol projects that Candlelight could win as many as 300 communes. Standing in their way is not only the political machine of the CPP, but also a slew of what some critics and election monitors call a pattern of intimidation, threats, and official bias.

Kuntheamy says the NEC, the election body, seems less likely to take up complaints filed by opposition groups than those lodged by the CPP.

“The CPP can go anywhere [to campaign], they’ll help them arrange it even with the traffic jams,” Kuntheamy said, referring to authorities. ”The other parties, they can only do smaller things, but they’ll give the CPP the green light.”

Hang Puthea, NEC spokesperson, acknowledges that domestic and foreign observers, including the European Union and United Nations, have criticised Cambodian elections as neither free nor fair. He rejects such characterisations and says the electoral process, as well as the work of the NEC, is politically impartial.

“Politicians sometimes play the game, do something outside the law, and then complain to the NEC,” Puthea said.

Before joining the election committee, Puthea had led Nicfec for about 18 years. During that time, he was also a member of the Asian Network for Free Elections. 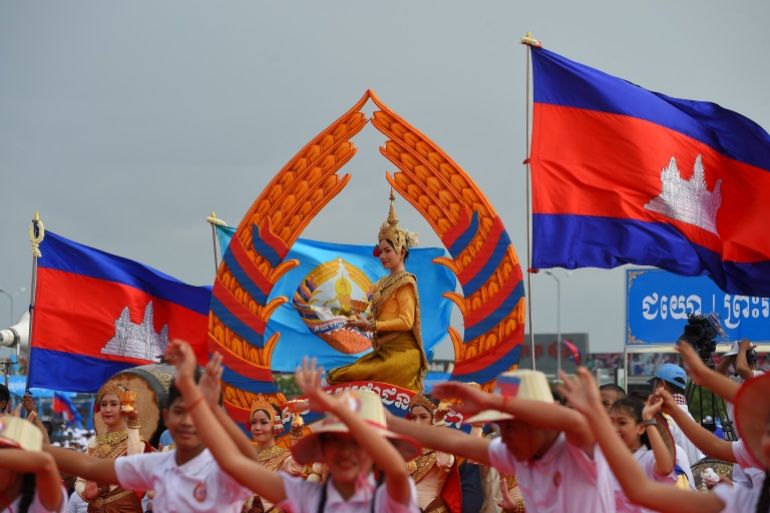 Puthea agreed the ruling CPP has some benefits because of its size and extensive membership, but denied that the system as a whole was tilted in its favour.

Government spokesman Phay Siphan told Al Jazeera that he did not expect the ruling party to have any difficulty in giving ground to the opposition, even after five years of almost complete power.

He says all Cambodians have a role to play in building democracy, but that political actors must follow the rules.

‘People vote for who they want’

In a belt of central Phnom Penh communes, almost every home or storefront seen by Al Jazeera this week was adorned with stickers representing the CPP. Some of those bore just the party logo, while others had pictures of Prime Minister Hun Sen or Heng Samrin, the president of the National Assembly.

A woman working at a small money services booth outside her family’s home told reporters she was not afraid to speak about the election, but declined to give her name when asked.

Though the family house had CPP stickers on it, she said they did not necessarily represent their political leanings – party operatives had gone through her commune and asked residents if they could put the stickers up.

“If Candlelight came, I’d let them do it too,” she said. “Having the sticker doesn’t mean we’re CPP, people will still vote for who they want.”

Some other residents told Al Jazeera they did not know much about the election or have any strong feelings about it.

In the neighbouring commune of Tuol Svay Prey I, the NEC had stripped all Candlelight candidates from the ballot, citing what it described as irregularities with the party’s list. 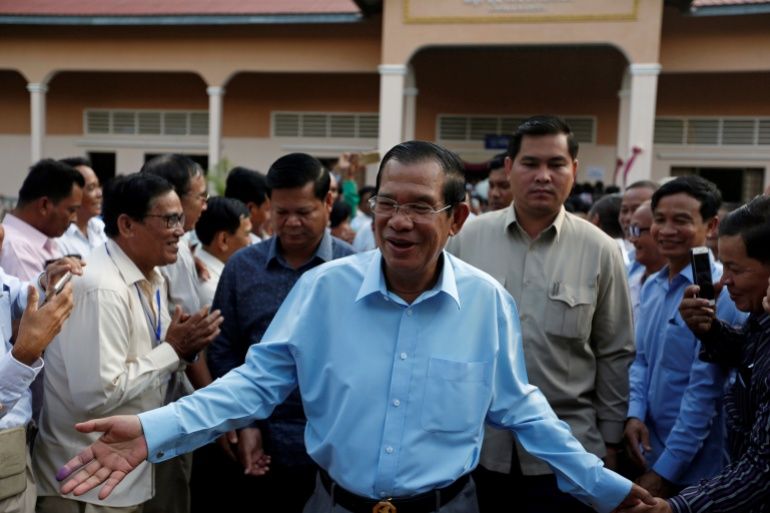 Cambodia’s Prime Minister Hun Sen has consolidated power in the past five years. Opposition leader Kem Sokha is on trial for “treason” while other prominent opposition politicians are in exile

At first, a shopkeeper there told reporters he knew little about the election, but had heard that a party had been eliminated. But as the conversation continued, he seemed to recall more details about the contest.

He and his wife said they would go to vote on June 5 out of a sense of civic duty, as well as a feeling of obligation to the incumbent commune chief and the ruling party.

“I live here, I have to like him – I live under their house roof,” the shopkeeper said, using a figure of speech to refer to CPP territory. “Besides, [the commune chief] is a good person, that’s why he’s elected.”

Though he also declined to give his name for public comment, he did offer a closing analysis.

“They’re afraid they might lose,” he said of the ruling CPP. “That’s why they dissolved the opposition here.”