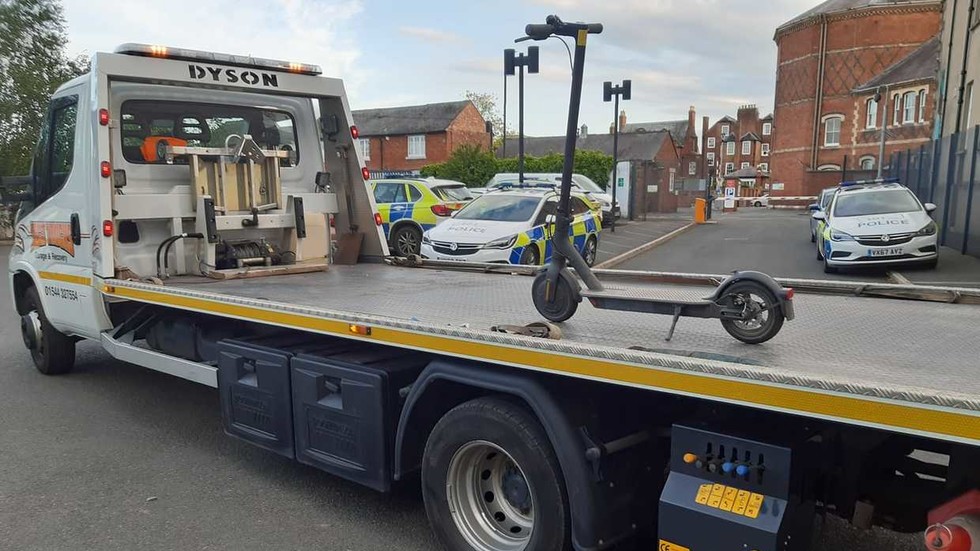 West Mercia Police have been ridiculed on social media for posting a photo of a 7.5-ton lorry towing away a seized 45kg e-scooter, with commenters wondering why it wasn’t simply placed in the trunk of a service car.

The two-wheeler was confiscated in Hereford on Friday over an unspecified road traffic law violation. The police clarified that electric scooters aren’t allowed “on roads, pavements, or other public places” because they don’t meet safety regulations and therefore can’t be properly registered or taxed.

The photo of the seizure posted on Facebook shows a scooter on the back of a flatbed lorry. While the police clarified that the image “was mocked up” in the police yard, it didn't stop followers from bashing the force for what many suggested was a waste of money on the vehicle’s transportation.


“Do you really want congratulating on what looks like a complete waste of money to bring a tow truck to seize a flipping scooter,” a commenter wrote.

“Couldn't they have just put it in the back of a car instead,” another added, voicing an opinion that was echoed by many in the thread.

“What a waste of taxpayers money,” one of the users lamented, insisting that “if that was a private company someone would be sacked.”

Poking fun at the police, others jokingly suggested that officers should have fetched a bigger truck for the task. “Don’t think that one’s big enough,” one said.

Many were baffled by the very reason for the seizure. “Why can this e-scooter not be ridden, but in big cities like Liverpool you can hire them and ride them where you want?” they wondered.

Others called for UK laws on this type of transportation to be amended, insisting that e-scooters were “the future and have zero emissions… Why punish the green energy users?”

Even those who blamed the users of two-wheelers for being “irresponsible” and causing inconvenience to both pedestrians and car drivers agreed that e-scooters needed to be made legal to make their riders abide by the traffic rules.

Others, however, argued that the whole issue wasn’t worth the attention of the police and only distracted it from more important duties. “Get a grip and start tackling the crime that’s actually affecting people’s lives,” one of the messages advised.