The latest wage figures will likely concern policymakers at the Bank of England who fear increases will fuel inflation further down the line.

Wage growth picked up by more than expected over the three months to September, according to official figures also showing a rise in the jobless rate.

The Office for National Statistics (ONS) said average weekly earnings, excluding bonus payments, rose at an annual rate of 5.7% during the three months to September as more workers secured better deals to help navigate the cost of living crisis and firms moved to retain and attract staff.

That was up from the 5.4% figure last month.

Economists polled by Reuters had expected an increase of 5.5%.

Nevertheless, at 5.7% it remains well below the official rate of inflation at 10.1%.

Real wage growth was 3.7% weaker in September when the effects of inflation were included, the ONS said. 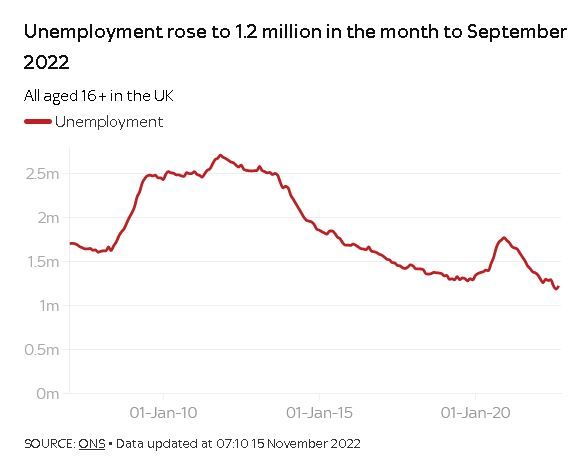 Darren Morgan, ONS director of labour and economic statistics, said of the shift: "The proportion of people neither working nor looking for work has risen again.

"Since the onset of the pandemic, this shift has largely been caused by older workers leaving the labour market altogether, but in the most recent quarter the main contribution has actually come from younger groups.

"August and September saw well over half a million working days lost to strikes, the highest two-month total in more than a decade, with the vast majority coming from the transport and communications sectors.

"With real earnings continuing to fall, it's not surprising that employers we survey are telling us most disputes are about pay."

The figures were released as the economy battles problems from the highest inflation for 40 years and the fallout from Trussonomics - namely the now largely reversed mini-budget of September.

Official figures last week showed the economy contracted during the third quarter of the year as the cost of living crisis hit demand, leaving the country on course for a prolonged but shallow recession, according to the Bank of England, which believes the jobless rate could hit 6.5%. 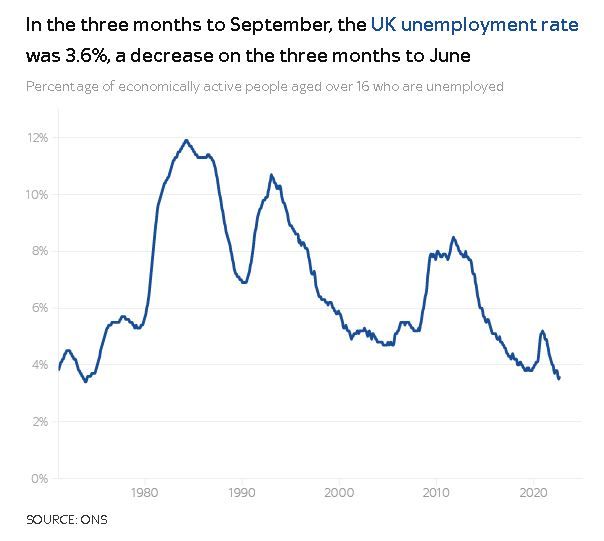 The Bank fears a shrinking labour market will add to inflation pressures, forcing it to raise the Bank rate even as the economy heads into the expected recession.

The rate is the single most important interest rate in the UK and determines the rate the Bank of England pays to commercial banks that hold money with them. It influences the rates those banks charge people to borrow money or pay on their savings.

The Truss government's growth plan exacerbated problems as financial markets called into question the UK's economic credibility, making imports more expensive through a collapse in the value of the pound.

Jeremy Hunt, the chancellor, will deliver his autumn statement to MPs on Thursday with little firepower to help alleviate the overall pain.

He told Sky News on Sunday that everyone faced higher taxes as the government, now led by Rishi Sunak, aims to take a more sustainable approach to the public finances.

It is believed the package will be designed to save about £50bn from annual borrowing in the medium term.

Mr Hunt said in reaction to the employment data: "Tackling inflation is my absolute priority and that guides the difficult decisions on tax and spending we will make on Thursday.

"Restoring stability and getting debt falling is our only option to reduce inflation and limit interest rate rises."

"Real wages have fallen again, thousands of over 50s have left the labour market and a record number of people are out of work because they're stuck on NHS waiting lists or they're not getting proper employment support.

"What Britain needs in the autumn statement on Thursday are fairer choices for working people, and a proper plan for growth."