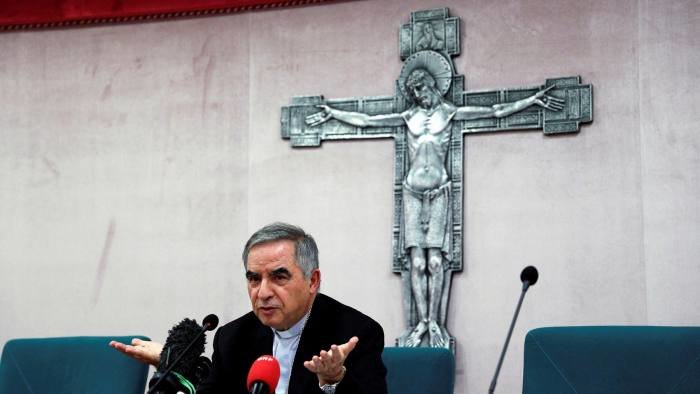 The cardinal who oversaw the team at the heart of a Vatican investigation into a suspicious London property deal conducted additional investments of up to £100m in other London luxury apartments, documents show.

Documents including emails and financial accounts seen by the Financial Times show that Cardinal Giovanni Angelo Becciu, whom Pope Francis forced to resign last week, invested Vatican funds into a portfolio of ultra-prime flats in and around Cadogan Square, Knightsbridge, one of the most expensive residential addresses in London.

The revelations of additional high-end London property acquisitions decided by the 72-year-old Italian clergyman come as Vatican magistrates are investigating a separate €350m investment in a large building in Chelsea called 60 Sloane Avenue, which Cardinal Becciu also oversaw when it was made in 2014.

The Holy See has said the Sloane Avenue deal caused large losses. A London-based businessman, Gianluigi Torzi, was charged and arrested by the Vatican authorities with “extortion, embezzlement, aggravated fraud and self laundering” for payments made to him for his role as a middleman in the purchase. The Italian, who was released from custody, denies wrong doing.

The new documents, which do not suggest any wrongdoing, shed further light on the financial activities of the powerful Secretariat of State, the Vatican’s central administration office whose mission is also to invest hundreds of millions of euros of donations from Catholics.

Cardinal Becciu was second-in-command of the Secretariat between 2011 and 2018, a role that made him the third most influential man in the Holy See after the Pope. On Friday, he said he had been asked to resign by Pope Francis and vowed to defend himself against all accusations of mismanagement of Vatican funds.

“The Pope told me that he no longer had faith in me because he got a report from magistrates that I committed an act of misappropriation,” Cardinal Becciu said last week. “I accepted his request to step aside. But I am innocent, and I will show it.” He said the allegations were separate from the Secretariat's investment in London property. 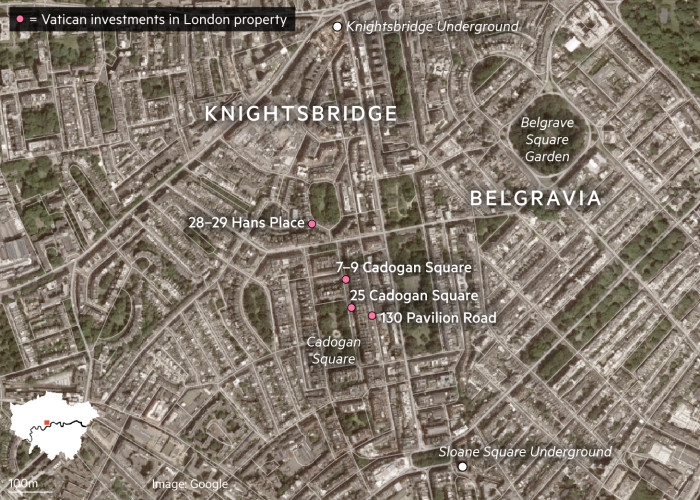 The documents show Cardinal Becciu oversaw a development that involved buying three apartments on 7-9 Cadogan Square for a total of £19.25m and spending £1.25m on redecoration and building reforms, including £39,000 on fireplaces, £52,000 on flooring and £7,000 on wallpaper, a document outlining the refurbishments shows.

The acquisitions amounted to £95.75m. That total was partly funded with mortgages from the now defunct Swiss bank BSI, and Rothschild, according to details of the loan agreements seen by the FT.

The development plan was managed by a British company called Sloane and Cadogan, with an aim of selling the refurbished apartments on at a profit. The properties were purchased by the Secretariat of State through four Jersey-incorporated companies named Charybdis, Princeps, Civitas and Valerina, according to corporate filings.

Sloane and Cadogan, which is not suspected of any wrongdoing, declined to comment.

Cardinal Becciu did not respond to emailed questions. He had previously said that investments in London property was accepted Vatican practice and a responsible use of money entrusted to the Secretariat.

In 2017, three years after the initial investment, two Vatican officials reporting to Cardinal Becciu - Alberto Perlasca and Fabrizio Tirabassi - informed Sloane and Cadogan that a different investment company based in Switzerland called Valeur was to be given part of the fees charged to manage and develop the properties, according to correspondence seen by the FT.

Both Mr Perlasca and Mr Tirabassi have been suspended by the Vatican authorities as part of the continuing investigation into the 60 Sloane Avenue investment. That investment was separate and not linked to the Cadogan Square developments. 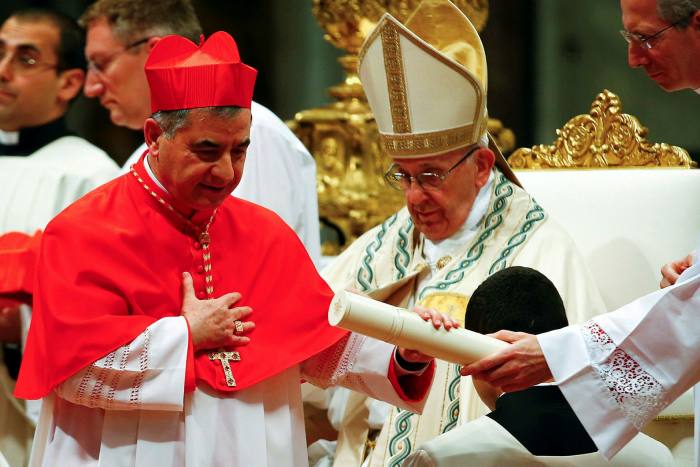 Cardinal Giovanni Angelo Becciu, left, with the Pope in Saint Peter’s Basilica at the Vatican in 2018

In a letter dated March 2017 seen by the FT, Sloane and Cadogan executives complained to the two now suspended Vatican officials that Valeur had “little or no expertise in the demanding UK super-prime real estate market . . . It is therefore unclear as to how they could advance and add value to the fund’s investments.”

The Sloane and Cadogan executives eventually declined Mr Perlasca and Mr Tirabassi’s request to insert Valeur into the project, according to people with knowledge of the exchange, and the deal never happened.

Valeur told the FT that its executives had never met Cardinal Becciu and had “a limited number of contacts strictly in relation to technical matters” with Mr Perlasca when the Secretariat requested it was made an “investment adviser”.

Valeur said it was not subject to any investigation by the Vatican or any other legal authority, had not received any request for information and had not been accused of any wrongdoing.

Mr Perlasca did not respond to emailed questions about the reason behind his request to insert Valeur into the management of the London properties. When Cardinal Becciu was asked last week if he or the Secretariat had ever done business with Valeur, he said: “I have never heard of these men.”