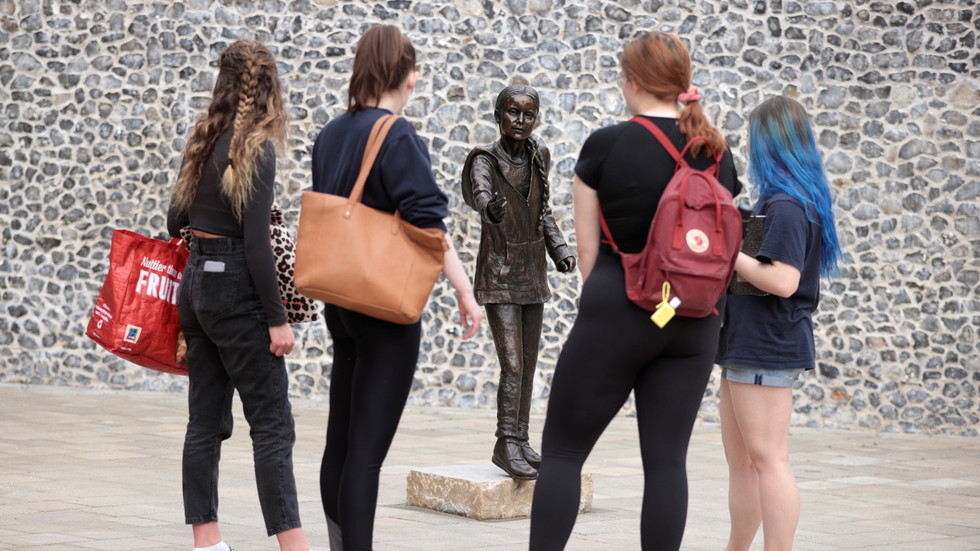 The University of Winchester has unveiled a statue of Swedish climate activist Greta Thunberg. The project invoked a storm of criticism, with students of the austerity-enduring university fuming over the questionable use of funds.

The bronze statue of Thunberg was unveiled at the university’s West Downs Campus on Tuesday. The monument, which is basically a life-size figure of the teen climate activist, is dubbed ‘Make a Difference’ and is supposed to show the university’s “ongoing commitment to sustainability and social justice.”

The statue has received, at best, a very cold welcome from students, with the Winchester chapter of the University and College Union (UCU) branding it a “vanity project” days before the unveiling. The sizeable sum of money to fund it – nearly £24,000 – “should have been better used by preventing redundancies and other cuts,” the union argued.

The union stressed that it had no issue “with the statue being of Greta,” highlighting its own efforts in organizing on-campus climate change protests. It harshly criticized the university’s decision-making process, arguing that the decision to erect any statue should have been publicly debated rather than made during closed-door meetings.

The University of Winchester tried to address the raised issues as it announced the unveiling of the statue, explaining it was commissioned back in 2019 and funded with money allocated to develop the campus, which cannot be used elsewhere.

The explanation, however, did not satisfy the critics, who argued the pricey monument was an insult to students struggling amid the pandemic. The university’s opaque approach to decision-making was in the crosshairs as well.

Climate change-minded critics mocked how the university chose to support the Swedish activist, pointing out that spending that much money and casting a bronze figure was not exactly eco-friendly. Thunberg herself, however, has not commented on her statue so far.

Some critics took a somewhat more personal approach, questioning what exactly Thunberg achieved to earn a monument at just 18 years old. The location raised a few eyebrows, too, with many highlighting the fact that the activist had exactly zero links to the university.

The statue also invoked criticism aimed at climate change activism in general, with the movement being mocked for being a “cult” for its “worship” of the teen.