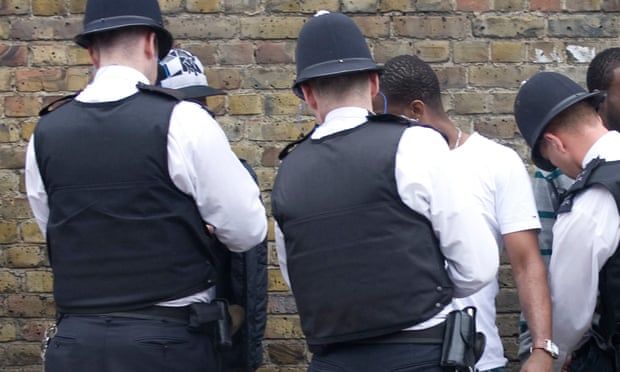 The number of stop and searches carried out by police has risen by 24% to almost 700,000 in a single year, with officers using the tactic on the equivalent of one in five male minority ethnic teenagers, statistics show.

Use of the controversial power increased dramatically over the period covering lockdowns, rising to 695,009 instances, according to figures from the Home Office. It states that black, Asian and minority ethnic (BAME) males aged 15-19 were searched 208 times for every 1,000 people.

Of these stops, for which officers require reasonable suspicion, the proportion that resulted in an arrest fell from 13% to 11%.

The data, which covers England and Wales in the year ending March 2021, also shows that one in 50 stops resulted in the seizure of an offensive weapon – 15,800 in total – and the tactic led to 79,000 arrests in a year. 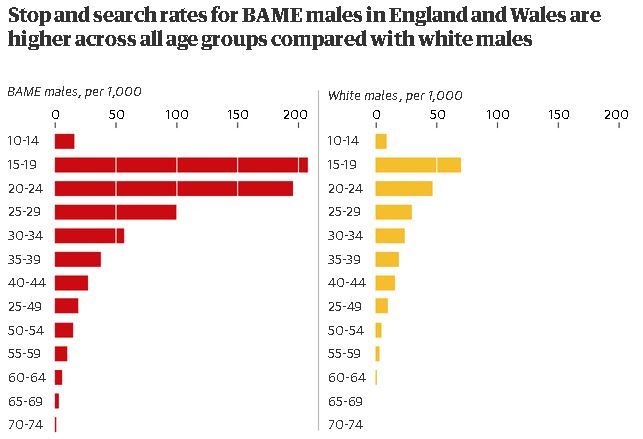 The Home Office stop and search report said young minority ethnic males experienced the highest rate of stops, with the overall number of searches being the highest for seven years. The data does not make clear whether some individuals were stopped repeatedly, and this year’s figures are the first where the ages and gender of those stopped were recorded alongside ethnicity.

The Home Office report said: “Males aged 15-34 from a BAME background account for 32% of stop and search in the year ending March 2021, despite only comprising 2.6% of the population.

Only BAME males aged under 10 or over 54 accounted for a lower proportion of stop and search than their proportion of the population, the report added.

The biggest reason officers gave for stopping someone was for drugs, accounting for 69% of all stops, with the overall number of drug stops rising by 36% in a year. Some forces said intensified action against county lines drug-dealing operations boosted the figures.

Few disagree that stop and search can be a vital crime fighting tool, but its alleged misuse by police has led to it being a key flashpoint between law enforcement and communities.

The period the figures relate to encompasses pandemic lockdowns when fewer people were on the streets, which afforded the police more time. It also coincided with the mass Black Lives Matter protests across Britain, triggered by the murder of George Floyd by police in the US and concerns about stop and search and racial disparity in the UK.

Sgt Andy George, the president of the National Black Police Association, welcomed the fall in disproportionality, but said other figures were startling.

He said: “The statistics that one in five young people from ethnic minority backgrounds were stopped is a shocking fact and policing must look at why four out of five searches result in no further action and how the style and tone of some stops may be pushing an entire community away.”

Martin Hewitt, the chair of the National Police Chiefs’ Council, who has vowed to improve relations with black communities, said: “There are longstanding and well-documented challenges in our relationship with black communities – the confidence gap of 10% to 20% compared with the national average remains deeply concerning. Racial disparities exist in our service that we still cannot fully explain.

“We can’t claim to police by consent if any community or section of society doesn’t trust us and doesn’t believe in what we are doing.”

A Home Office spokesperson said 23% of stops resulted in a positive outcome when warnings and community resolutions were added to the arrest figures: “Stop and search is a vital tool for police to protect the public. Tragically, data shows that young black men are disproportionately more likely to be the victims of knife crime. No one should be targeted for stop and search because of their race and there are extensive safeguards in place to prevent this.”

Some in policing say disproportionality does not necessarily show a racial bias. They say it reflects the ethnicity of victims and perpetrators of crimes, as well as who is around on the streets in high-crime areas. However, some campaigners see the statistics as showing an endemic unfairness.

Katrina Ffrench, the director of Unjust UK, said: “When crime rates declined at a time of a global pandemic, officers decided that increasing searching would be an effective use of resources.

“The data doesn’t lie. Black communities are clearly not receiving a fair service and their experiences of being over-policed aren’t imagined or contrived.”