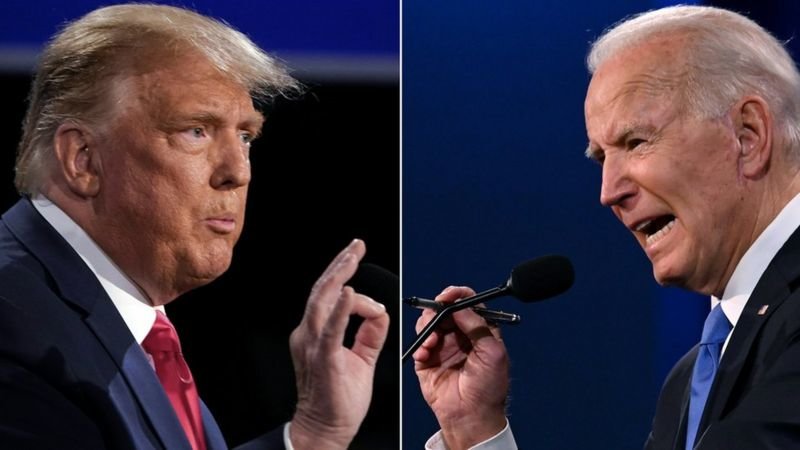 US election 2020: Would Trump or Biden be best for the UK?

Westminster will be watching carefully as the results of the US presidential election come in.

"They call him Britain Trump."

In Donald Trump's world, perhaps there was no greater compliment for Boris Johnson than saying he was, well, just like him. And this was how he greeted the prime minister's ascent to power.

While both leaders enjoy casting themselves as outsiders, that caricatured comparison is far from a complete picture.

But as the world waits to find out whether the president will defy the polls and stay in the White House, or Joe Biden will get to move in, it's worth wondering for a moment who the UK government would rather hold the key.

For one senior politician with experience of dealing with Trump's White House and Boris Johnson, it's a simple equation: "It's short term, versus long term".

They suggest in the immediate future, it's better to have a very pro-UK ally on Pennsylvania Avenue, easing the path to a trade deal, and holding the diplomatic ties between our two countries firm, rather than being tempted to move closer to Paris or Berlin.

But in the long term, Biden's a better pick, they suggest, because the UK's standing in the world is based on its participation in institutions and alliances - the very structures they say Trump wants to "wreck".

And has the president's obvious liking for the prime minister really translated into much for the UK anyway?

Another source who has been involved with handling that fabled special relationship isn't so sure, suggesting the Britain that "Trump loves is the country of the royal family and Winston Churchill, not modern Britain".

And his liking for the PM and his own ties to the UK "haven't translated to listening" to the government's opinion. 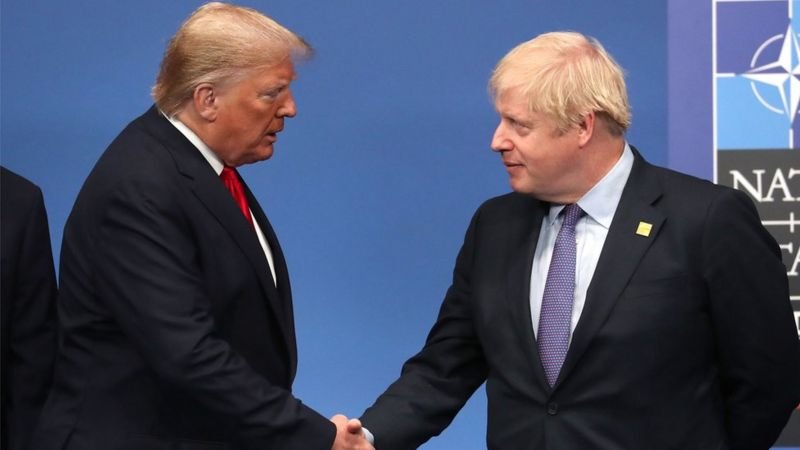 President Trump has spoken warmly of Boris Johnson as a "really good man".

But the relationship with Biden could have problems.

The same insider suggests that he thinks that Brexit is "nuts" and sees the UK government as a little too like Trump's for his liking.

During the campaign, he even went on the record to make plain his opposition to the UK's controversial Internal Market Bill.

But when it comes to a trade deal, a Biden White House would be dealing with the same strong commercial interests in the US - the same farmers, the same car makers, the same healthcare industry that wants to make the most of potential opportunities in the UK and defend their same interests just as strongly.

And if there is a change of administration, one senior official told me the work of the trade deal with the US would essentially have to start again.

Biden in charge, however, could bring other opportunities for the UK, particularly on climate change, when the Trump administration seems barely interested in the conversation.

The UK is hosting the huge COP26 climate conference in 2021 - a willing White House could make all the difference to making that count.

And with the UK taking charge of the G7 group through next year comes another opportunity to prove that international cooperation can work.

Whitehall doesn't expect immediately to be Joe Biden's best European friend if he wins - the expectation is that he would go first to Berlin.

But there are big chances to show that the special relationship, so fretted over on this side of the pond, counts in the near future, if Biden is in charge.

The personal and political contrasts between the two US rivals are vast, as are their attitudes to the UK, particularly over the issue of Brexit.

But in practice, the gap from across the Atlantic on many issues may not be so wide after all.

For all the angst and excitement of an election, for all the profound differences between the candidates this time round, the longer-term strategic interests shared by the UK and the US are bigger than any one, or even two politicians.

The security and defence cooperation between the two countries is close and longstanding, and many miles under the radar of the wild swings of Trump's Twitter diplomacy.

And whisper it, VERY different domestic administrations in the White House have held similar positions sometimes when it comes to foreign affairs.

President Trump has used a megaphone to criticise Nato, as well as how much other EU countries stump up towards the alliance.

But one insider points out that Barack Obama shared that view: "Trump shouts it. Obama whispered it," but essentially they agreed.

How Joe Biden might say it, if he wins, we'll have to see.

For all that the "Britain Trump" characterisation is a misleading tag, the chemistry between leaders does matter.

A change in the White House would mean a loss of political affinity between the prime minister and the most powerful leader in the West.

But it could mean a more predictable partner for the UK, at a time of huge change. Westminster will be watching the election results carefully, along with the rest of the world.

That was wild - a three-year campaign in three minutes