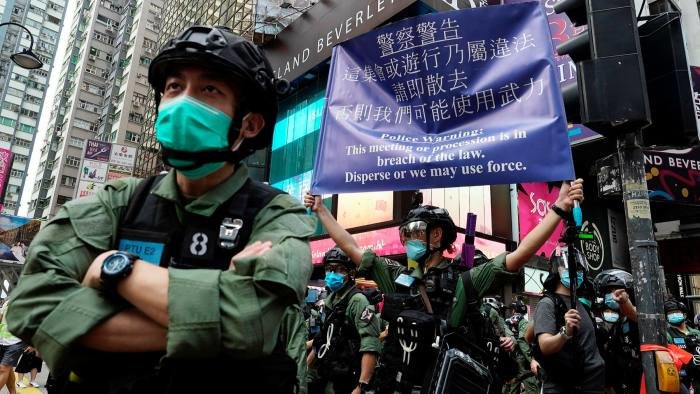 US blocks Hong Kong users from some government websites

The US has blocked Hong Kong residents from accessing at least two federal government websites that provide economic data, in a development that could fuel rising tensions between Washington and Beijing over the semi-autonomous territory.

The websites of the Bureau of Labor Statistics, which publishes economic information including monthly jobs and unemployment figures, and the US Census Bureau, which releases data such as retail sales, new residential construction and international trade, have been inaccessible to Hong Kong internet users for months.

The US government also blocks access to some of its websites for users in mainland China, as well as other countries, such as Russia and Ukraine.

The Financial Times contacted multiple US government agencies for information on the reasons for the blocked websites in Hong Kong but received limited responses.

A spokesperson for the Department of Labor, which includes the Bureau of Labor Statistics, declined to comment on “security procedures” but confirmed that “agencies began implementing geoblocks that included Hong Kong in January 2018” - nearly three years ago.

That would mean the measures started more than two years before the US punished the Asian financial centre in response to Beijing’s introduction in June of a tough security law for Hong Kong. The US maintained that the security law meant Hong Kong was no longer sufficiently autonomous from mainland China.

The US Census Bureau neither confirmed nor denied the federal government had blocked its website but said it “continually reviews cyber threat reporting and adjusts accordingly as circumstances evolve”.

Analysts in Hong Kong say the blocking of US websites has intensified for internet users in the city this year.

“Non-farm payroll data is arguably the most important economic statistic in the world,” he said.

Although access to the websites is blocked, the data can be seen using a virtual private network, Bloomberg or Eikon terminal, as is the case in mainland China.

“I have a VPN but didn’t ever think I would need it in Hong Kong,” said Mr Tan.

Although many US government websites remain accessible in Hong Kong, one US official with direct knowledge of Hong Kong policy said more would be blocked soon because Washington no longer recognised the territory as autonomous from mainland China.

Tensions between Washington and Beijing have risen markedly since the election of Donald Trump as president in 2016. The rift has deepened over Beijing’s treatment of Hong Kong, which was gripped by months of anti-government protests last year.

Roya Ensafi, director of the Censored Planet lab at the University of Michigan, a department that tracks geoblocking, said the practice is commonly used by companies, such as ecommerce websites, to restrict access from particular locations, and can also be used to prevent malicious traffic.

US Cyber Command told the FT it started implementing geoblocking in “certain areas” in 2017 to protect dozens of government military sites and ensure “network availability” around the world. But US defence officials were unable to comment on why some civilian websites were also geoblocked.

James Lewis, a cyber security expert at the Center for Strategic and International Studies, said the geoblocking could be a “defensive tactic” to protect against cyber attacks from multiple computers to overwhelm and jam internet traffic known as distributed denial-of-service. But he described such mechanisms as “clumsy”.

“It's either really secret (which would be odd for these agencies) or very low-budget,” he said of the civilian website blocks.

Jim Fitzsimmons, director in the cyber security consulting unit at Control Risks, the consultancy, said geoblocking made it “inconvenient - but by no means impossible - for people in China and Hong Kong to access official websites of the US government”.

He added: “The US is still the biggest and most important economy in the world. Information about it is critical to businesses all around the world, including in China.”

Mr Tan said the changes raised questions about Hong Kong’s role as a global financial centre. “If you interfere with information in a financial centre, it’s like cutting off oxygen,” he said.
Add Comment