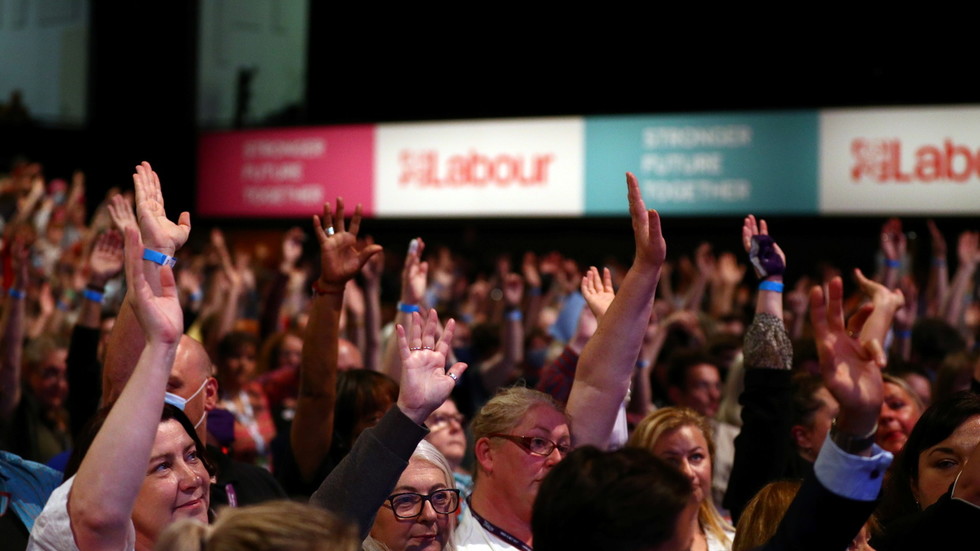 ‘Unelectable!’ ‘Woke’ Labour condemned by Britons as conference delegates told too many white men putting their hands up to speak

Delegates at the Labour Party conference have been told that too many white men were putting their hands up to make contributions during a debate on housing and transport, leading some to question the direction of the party.

On Sunday, white men were told not to “dominate” the conversation during a session on housing and transport at the Labour Party’s annual conference in Brighton. Mark Ferguson, a member of Labour’s National Executive Committee and chairman of the session, noted his concern that people putting their hands up to speak were predominantly white men and urged them to let others speak.

“I am afraid, and I am not speaking from a position of particular strength here, there are too many white men putting their hands up,” Ferguson told delegates, adding that he wasn’t “anti-white men” and that some of his favourite people, including his dad, were white men.

Following some laughter, he continued, stating that he did not want white men to “exclusively dominate this or any other debate at this conference,” apparently echoing the words on his “comrade” earlier in the morning.

“I’m not putting anybody on the spot here, but if you want to speak do not be afraid to put your hand up, we want to hear from you, this is an inclusive conference,” Ferguson added, seemingly aiming his comments at women and ethnic minority groups.

However, Ferguson’s comments haven’t gone down well with the British public online. Many people on social media questioned whether the Labour Party actually wanted to be elected as they continue to push the woke agenda. Others labelled them “unelectable.”

One person retorted that “too many woke people [are] speaking in Britain at the moment,” and said the majority of people need to be heard. Others were equally critical, with one Twitter user claiming Labour were no longer interested in people from deprived backgrounds, instead suggesting it was all about race.

Another person highlighted that 87% of the British population is white and asked, “exactly how diverse does he want it to be?!” While others stated that the Labour Party, once the organisation of Britain’s working class, was clearly “not the party for white men.”

“Perhaps he should lecture the non-white delegates for not wishing to contribute,” one person chimed in, suggesting it was right to prevent people from contributing to the discussion if they didn’t want to.

One individual suggested turning Ferguson’s comments around. “‘Too many Black men putting their hands up....’ Doesn't sound so caring about diversity now does it?” Others concurred, with one noting “racism comes in all colours.”

Another Twitter user said she had been to these events before, and being both “brown and female,” they told her to sit towards the front of the room. “Just one of the many reasons I ran for the hills!” she added.

Others ironically claimed that it had been a “good conference” for the Labour Party, seemingly a reference to leader Keir Starmer’s comments that it was not right to say that only women had a cervix. Starmer was responding to a tweet by one of his MPs, Rosie Duffield, in which she appeared to support the argument that only people with cervixes were actually women.

Labour deputy leader Angela Raynor added to the controversy as she reportedly called Tory ministers a “bunch of scum” at the conference.