Immigration is needed to solve worker shortages and boost economic growth, says the head of the CBI - the UK's biggest business group.

With UK job vacancies near record levels, Tony Danker says "we don't have the people we need".

What are the visa rules for skilled workers?

Access to most UK visas is via the points-based system adopted after the UK left the European Union.

Having an offer of a skilled job from an approved employer and being able to speak English will give 50 points.

The applicant can achieve the remaining 20 points if they will be paid at least £25,600 a year.

They can also gain extra points for having better qualifications. There are 10 points for a relevant PhD, or 20 points for a PhD in science, technology, engineering or maths.

An offer of a job in which the UK has a shortage is worth 20 points, even if it doesn't pay as much money.

Certain jobs in health or education still merit 20 points even if the salary is less than £25,600. The applicant must be paid at least £20,480, and in line with set amounts for particular jobs in the UK's four nations.

The exception to this is Irish citizens, who are still able to live and work in the UK as part of the Common Travel Area. 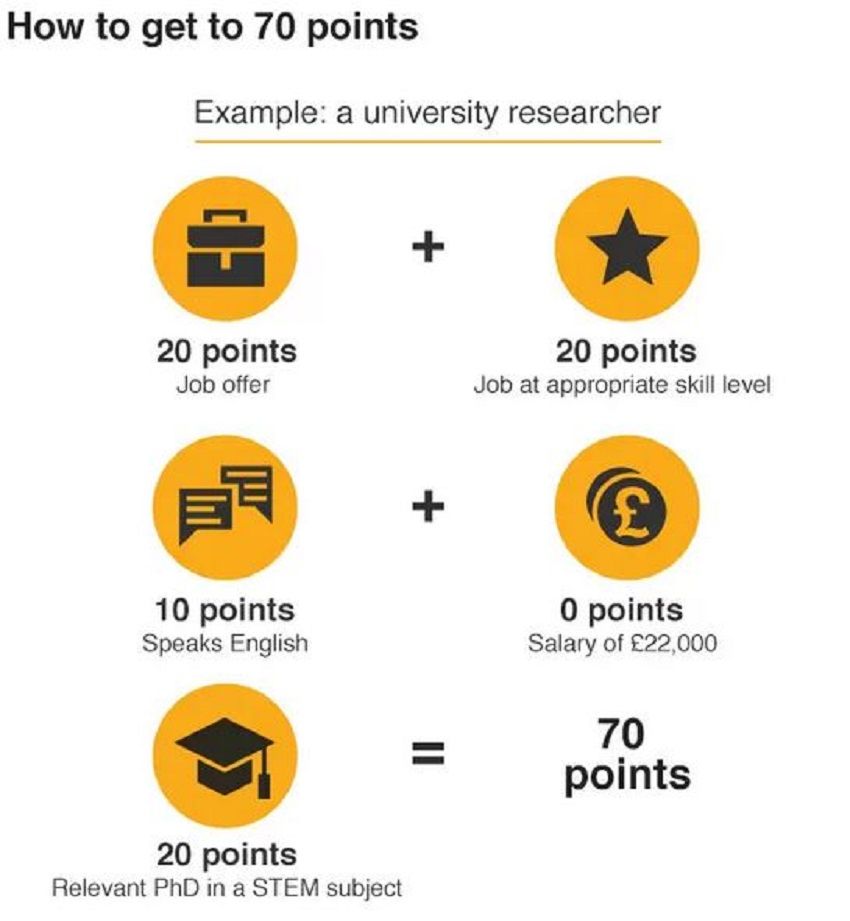 How much does it cost to apply?

The application fee depends on how many years the job seeker plans to work in the UK, and whether their job is on a list of skills that the UK has shortages of - for instance, vets and web designers.

Jobseekers also have to pay the health surcharge, which is £624 per year when they apply. That money is refunded if they don't get a visa.

They also need to show they can support themselves in the UK, which usually involves having a total of at least £1,270 available.

How does the graduate system work?

The High Potential Individual scheme is open to people who graduated from top non-UK universities in the past five years.

The government has published lists of which universities are eligible.

They will then be able to switch to other long-term employment visas if they meet certain requirements.

The visa costs £715 plus the immigration health surcharge.

Graduates will be able to bring their families, although they must also have maintenance funds of at least £1,270.

What about healthcare workers?

Health and Care Worker Visas are available for doctors, nurses and other healthcare professionals.

Those eligible pay reduced fees and can be supported through the application process.

Successful applicants will be exempt from the immigration health surcharge.

Applicants via this route still have to meet salary thresholds depending on the type of work they do.

Many care workers will not be covered by the scheme though, because applicants need to be paid at least £10.10 per hour.

Can people come to the UK to study?

There is no limit on the number of international students who can study in the UK.

The student visa application system allows them to apply six months before they are due to start a course if they are applying from outside the UK.

The government has also launched a graduate visa to allow students who have completed a degree to stay in the UK for two years. This will rise to three years for those who have done a PhD.