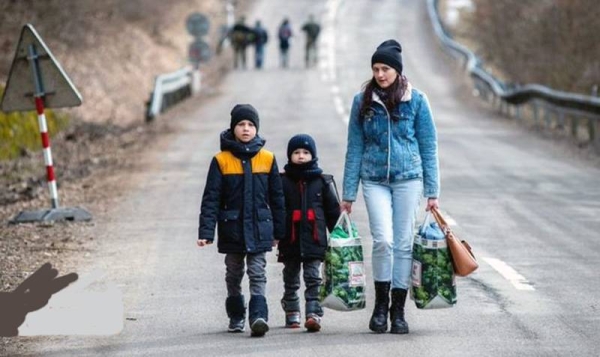 "Watching the sheer number of people coming out of Ukraine, we had to do something," said Lucy Wells, an actress from southern England. "I come from a Christian family, we were brought up to help others wherever you can."

Lucy and her family signed up for a UK government scheme to host refugees fleeing Russia's invasion of Ukraine. They were matched with two women from Kharkiv, each with two children, and a little dog called Gabbana.

More than a month on, however, Lucy was still waiting for the refugees to arrive, the three bedrooms and living room they set aside in their large farmhouse in Dorset, England, laying empty.

"We are fighting a catalogue of things," said Lucy, 34. "We went into this with trust, but unfortunately as the days pass it is clear something is deeply wrong with the system."

Launched on March 14, the UK's Homes for Ukraine scheme allows members of the public to voluntarily host those fleeing the war in Ukraine. Following government checks, they agree to accommodate refugees for a minimum of six months in exchange for a "thank you" payment of £350 (€333).

The latest government figures reveal that just 11,100 Ukrainians have arrived in the UK under the scheme, out of 65,900 applications.

Critics say the scheme is not working quickly enough, is poorly designed and does not have enough safeguards in place.

Lucy listed numerous issues with the scheme, describing it as "absolutely ridiculous".

"Getting answers was impossible, there were so many delays, and the visa application form for several weeks was only in English, not Ukrainian or Russian," she said.

Other UK sponsors noted the government helpline for the scheme charges 69p a minute and that in the application forms Ukrainians, including children, are asked "stupid questions", such as if they have participated in a genocide or committed war crimes.

Last week Lucy discovered — only through contacting immigration staff on their personal email — that two of the people she was sponsoring had been granted visas, yet no notification had been sent.

"Sponsors have opened up their hearts and become emotionally attached," said Lucy. "But the system is working against us."

Lucy felt "lucky" as the refugees she was hoping to sponsor were safe in Germany, although she said that others have been less fortunate. One case she heard of involved a Ukrainian who was killed in a missile strike before their sponsorship application was processed.

At the end of April, Lucy finally welcomed the Ukrainian families into her home. They cooked borscht together, marking the first time the families had made a home-cooked meal in several months.

"I hope the government will fix everything as quickly as possible," she told Euronews.

Teresa Ferguson, who lives in the Cumbrian countryside near the Scottish border, echoed the difficulties Lucy had experienced with the scheme.

Having recently completed the application to sponsor a young Ukrainian couple, who are still to arrive, she said "there is no guidance, the helplines are next to useless and everything has been made difficult".

"It makes you question whether the government response is just lip service," she added. Teresa, 56, who runs a dog daycare business, wanted to help as she believes "we are only as good a country as we look after the least well off".

Last year she wrote to her local MP asking if she could host Afghan refugees fleeing the Taliban. Yet was told the government was dealing with the issue.

"There's an inconsistency in society," she said. "Ukrainians are welcomed, but other forms of refugee are made illegal, the rhetoric is not to help those coming across the Channel in dinghies.

"People should understand there's no difference [between the two]."

Teresa claimed there were deeper flaws in the scheme.

"The system lends itself to exploitation," she said. "There are worries about people using fake identities and I don't like how Ukrainians have to market themselves online."

UK sponsors and Ukrainians typically find each other on dedicated Facebook groups, which have tens of thousands of members, although charities are also working to match people.

While the majority of sponsorship arrangements have gone well so far, some problems have been reported.

A Ukrainian refugee was recently made homeless in Brighton after their host demanded money for bills. Teresa also questioned the ability of volunteers to care for people who could be damaged by the war.

"Lots of people are thinking it is a good idea, without realizing who they are taking in maybe traumatized, sad or worried."

"It is a bit weird," Teresa said. "You should do something because it is a good deed, not because you can parade it around to the neighbors."

Although she had spoken to the Ukrainians she would sponsor over instant messaging, Teresa still felt that inviting strangers into her home was a "leap in the dark."

She worried that "sharing space and identities with someone you don't know might feel claustrophobic."

But she added: "It is something we will work through. We are open and honest about what might happen."

Sylvia Tempest is one of the scheme's rare success stories. After two "long weeks waiting" she and her husband welcomed two Ukrainian women, each with two children, into their stone-built house in Durham last week.

Putting her "heart and soul" into the application process, Sylvia went to great lengths to ensure she sponsored the right families and that they "knew everything" about where they were going.

Her "very rural" home is a 10-minute walk from the nearest village, which has no shop, few transport links and a post office, which is open twice a week for two hours.

The two Ukrainian families were in Poland for weeks before the visas were granted. For Sylvia, the reason to offer herself as a sponsor was simple.

"We are two living in a five bedroom house, if someone else can use the space why not?"

"I also have two daughters the same age as the Ukrainian woman I am sponsoring," she added. "If anything were to happen to them, I'd like to think someone would help them out."

Calling the application system "as useful as a chocolate fireguard", Sylvia said ordinary people had more than compensated.

"I could not have done it without the support of the local area. People around here are so willing to help in my local community it's amazing."

After a lot of sleeping and rest, the Ukrainian families have shared much with Sylvia in the fortnight they have been together, often staying up chatting until the early hours.

"I haven't laughed so much in years," she says, "I don't know whether it is hysteria or maybe relief after the lengthy and frustrating application process. But we love having them here."