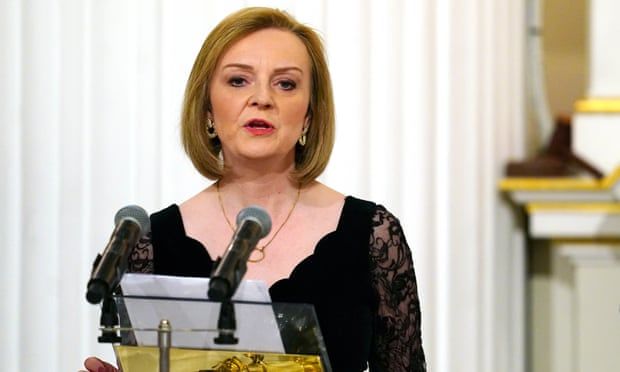 European Union insiders have warned that the British government’s threat to abandon parts of the Northern Ireland protocol risks undermining the international alliance against Vladimir Putin.

Officials in Brussels were “flabbergasted” at the timing of an intervention from the UK foreign secretary, who issued a statement on Tuesday night saying she would “not shy away” from taking unilateral action on the protocol.

Doubling down on Liz Truss’s remarks, her cabinet colleague Michael Gove warned the EU that “no option is off the table”, including ignoring parts of the Northern Ireland protocol, after the UK argued the solution put forward by Brussels last October would worsen food shortages.

Gove, a senior cabinet minister, said it would not amount to tearing up the protocol but he left open the possibility that the UK could pass legislation to disapply parts of the controversial framework.

One EU diplomat described Truss’s threat of unilateral action as “very risky, even irresponsible”, saying it threatened the international alliance against Vladimir Putin, while damaging UK efforts to secure participation in the EU’s research programme Horizon 2020 and secure other agreements. “I don’t see how [unilateral action] would solve anything in the short term and it would only worsen the standing of the west as a whole vis-a-vis Putin in these fragile times.”

A second EU source said: “The EU, all the member states, stand entirely united and a bit flabbergasted that the UK would want to be doing this now.”

Talks between the UK and the EU about the protocol are about to resume following a pause for the Northern Ireland elections but Brussels is adamant that the protocol itself cannot be renegotiated.

Brussels sources close to the talks are not certain of the government’s intentions, pointing to mixed messages in briefings to British media. “We will never close the door on a negotiated solution, so let’s see how the UK takes things forward,” the EU source said. “The chaotic messaging doesn’t suggest they know themselves where they want to take this,” the person added.

If the UK abandoned the protocol, the EU has several options. It could take legal action and restart previous litigation against the UK that the European Commission paused last July as a goodwill gesture. Other likely options include imposing tariffs on British goods or even suspending the EU-UK free-trade agreement. Sources said the response would be “robust” while stressing nothing had been agreed.

“The unilateral action looks like it would go further than article 16, but we don’t have anything agreed [in response] said an EU official.

Jeffrey Donaldson, the DUP leader, raised the stakes on Wednesday by saying his party may paralyse not only the executive at Stormont but also the assembly.

It had been widely assumed the DUP would back the nomination of an assembly speaker on Friday, which would let the legislative body function even without an executive, but Donaldson told the BBC the party may block even this limited role for Stormont. “We will need to make a decision on that,” he said.

Donaldson said Downing Street’s latest warnings on the protocol showed it was heeding DUP concerns. “I think the pressure we’ve applied is beginning to have an impact.”

The DUP leader also confirmed he would not take his Stormont assembly seat and would remain at Westminster as an MP unless the protocol was changed. A ban on double-jobbing obliged him to choose. Donaldson’s decision was viewed as an indication that he expected no swift resolution to the Stormont deadlock.

Speaking on BBC Breakfast on Wednesday, Gove said: “We are going to negotiate with the EU in order to get the best possible outcome for the people of Northern Ireland, but no option is off the table.

“Liz Truss will be meeting Maroš Šefčovič, the European Commission vice-president, tomorrow. They have a good relationship. They will try to make progress tomorrow. I know that both of them are fully committed to making sure we resolve some very difficult issues that have arisen.

“You would expect a UK government when it is thinking about the security of the entire United Kingdom to say that there is no option that is off the table and that is absolutely right.”

It comes after Truss criticised proposals put forward by the EU last October for “failing to properly address the real issues affecting Northern Ireland and in some cases would take us backward”.
Add Comment