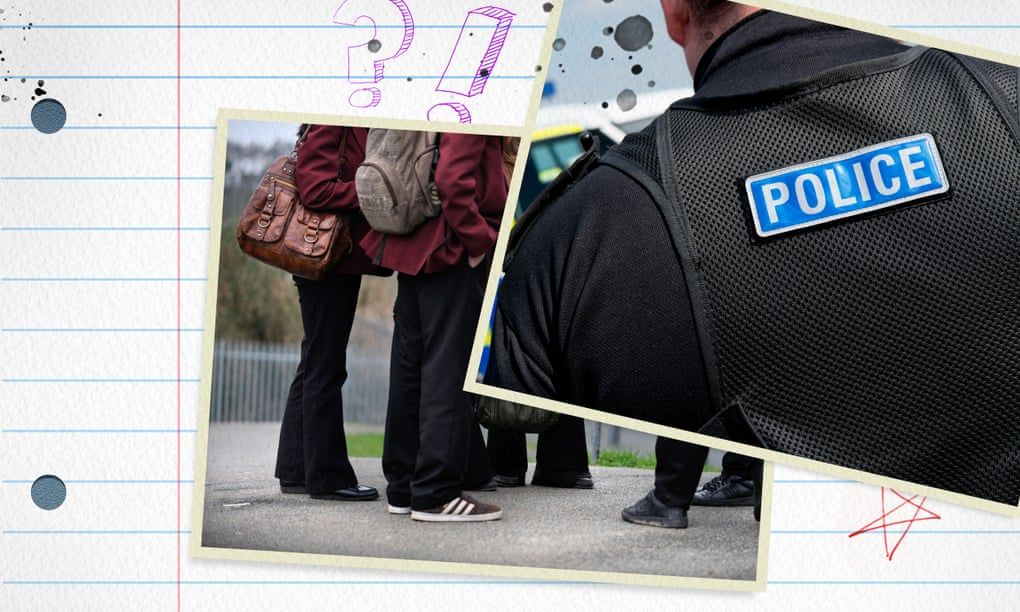 More than 650 police officers are working in British schools, with many assigned to sites in areas of high deprivation.

The number can be revealed as two police forces across the country are in the process of reviewing the role of officers in schools, following legal challenges over concerns they disproportionately affect black and minority ethnic pupils.

The activities of school police officers, often known as safer schools officers (SSOs), range from being a point of contact for teachers to more intensive interventions such as stop and search and surveillance of children suspected of being gang members.

While police forces say SSOs play an important role in keeping children safe, campaigners and charities warn that their presence risks criminalising young people, could exacerbate inequalities, and creates a culture of low expectations and a climate of hostility.

“When you introduce police into schools you threaten to jeopardise a child’s education by criminalising them at a very young age. The school is no longer a safe haven, a space where they feel like they can be helped,” said Dr Remi Joseph-Salisbury, a Manchester University lecturer and co-author of a report on police presence in schools.

Details of the police deployments were revealed in a freedom of information request to all UK police forces. They showed that 23 forces employed 683 officers whose roles were exclusively focused on schools.

In 2020, the Metropolitan police said they would review the role of officers in schools following a legal challenge raising concerns that they could have a disproportionately negative effect on pupils from a BAME background. Avon and Somerset have now also agreed to carry out an equalities assessment into the use of SSOs in response to a similar legal challenge.

The Met employed the largest number of school police officers in the UK. The number of SSOs in London has almost doubled to 357 in the last decade, according to evidence submitted to the home affairs committee.

The Met commissioner, Cressida Dick, said in 2019 that she wanted “SSOs to be embedded into the DNA of schools”.

The Met told the Guardian it sometimes used data on the numbers of deprived children to choose “priority schools” to receive more intensive interventions. In the capital, every school is offered a police point of contact, but priority schools will usually have a dedicated officer assigned.

A list of metrics used by police to choose priority schools, provided to the Guardian by the Met, included “provision of free school dinners (as an indicator of social deprivation)”, as well as GCSE attainment rates, crime data linked to schools and persistent absence levels.

In Bristol, 31.4% of children at schools with a police officer were eligible for free school meals, higher than the local authority rate – 22.7%.

In some areas, such as Wales, virtually all schools had a nominated officer to deliver education programmes and assist with incidents where required, but were not based at any one school. In others, they were used to target a much smaller number of schools, such as in Bristol, where Avon and Somerset Police assigned one officer each to seven schools.

Joseph-Salisbury’s report, Decriminalise the Classroom: A Community Response to Police in Greater Manchester’s Schools, was published by the charity Kids of Colour and the Northern Police Monitoring Project last year, in response to plans for at least 20 additional police officers in Greater Manchester schools in one term.

Drawing on interviews with teachers, young people and parents from across Greater Manchester, it found that police presence had a detrimental impact upon BAME pupils.

Joseph-Salisbury spoke of his own experience of stealing from a school canteen, which resulted in being disciplined by the head. He fears that such behaviour would now be criminalised.

“I got caught stealing from the canteen when I was 17 but it was dealt with by the principal and my punishment was to miss a few football matches … I went on to become an academic but when you have a police officer it automatically accelerates the situation into criminal behaviour,” he said.

A spokesperson for the Met said the key priorities of SSOs were to keep London’s young people safe by preventing and detecting crime that affects the school community.

“It also involves promoting positive life choices and offering diversion opportunities. It has been shown that early intervention is extremely effective. The MPS [Metropolitan police service] believes that safer schools partnerships are enormously valuable to all students, as well as schools and the wider communities in which they are present.”

The spokesperson said SSOs were involved in a range of youth outreach programmes including supporting rugby and football teams, developing anti-knife crime videos, and working with youth clubs.

A spokesperson for Norfolk Constabulary said: “Safer school officers are interviewed by pupils and the headteacher, and their primary role is to help children and young people, making sure they have the right support needed to develop, while also providing early intervention where needed, to help steer them away from crime.”

However, research by a London assembly member, Sian Berry, found no clear relationship between the number of SSOs in each London borough and the decline in youth offending between 2011 and 2015.

The first dedicated school police officers were introduced in the 1960s, but their usage was significantly expanded in the New Labour era as part of Tony Blair’s street crime initiative.

Vik Chechi-Ribeiro, a secondary school teacher and National Education Union Manchester vice-president, wrote that police presence in schools brought more children into contact with the criminal justice system. He said young people would travel from schools to pupil referral units and secure schools, to youth offending institutions (where half of inmates are black and minority ethnic) and, finally, to prison.

The former Ofsted chief inspector Sir Michael Wilshaw, who was a headteacher at a secondary school in Hackney, London, told the Guardian he was not entirely against the idea of police in schools but said often he found the officers assigned were unsuitable.

“I felt that sometimes the problem was that some officers sent to schools were not right for a school environment. We need energetic, vibrant officers who really care and who have been trained properly committing to these children,” he said.

“They can be a good thing – make pupils and staff feel safer – but it all must be appropriate. The school must always strive to ascertain facts about misbehaviour before even thinking about asking the police to speak with children.”

The National Police Chiefs’ Council (NPCC) said it was working in conjunction with the education charity PSHE Association and the London School of Economics, to evaluate the role of police in the classroom. A report, due to be published later this year, will focus on young people’s experiences of policing in schools and colleges.

Chief constable Jo Shiner, the NPCC lead for children and young people, said: “We are aware of the concerns raised by some communities and charities around the role of police in schools. The focus of the evaluation is on education to build trust and confidence between young people and the police.”

A government spokesperson said the deployment of officers was an operational decision for police forces and a matter for individual schools.
Add Comment