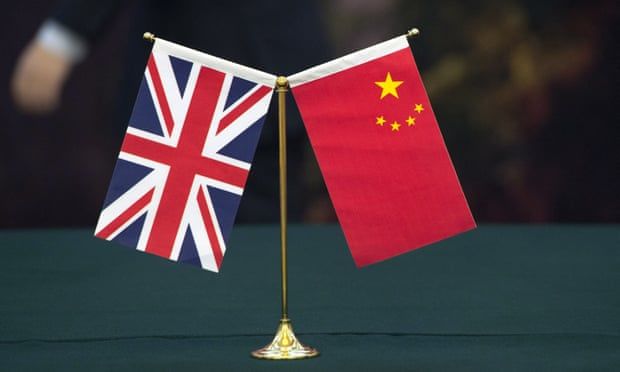 UK must match rhetoric with action on China’s treatment of Uyghurs, say MPs

Foreign affairs committee calls for import ban on products from Xinjiang, where it says there is ‘industrial-scale forced labour’

Britain must act to stop China’s atrocities against Uyghur Muslims by banning the import of Chinese cotton and solar panels from Xinjiang province, as well as by announcing that no government officials will attend the Winter Olympics in Beijing, a report by MPs says.

The chair of parliament’s foreign affairs committee, Tom Tugendhat, said that without action the UK would be allowing China “to nest the dragon deeper and deeper into British life”.

The committee’s report says the government’s often tough rhetoric over “the industrial-scale forced labour schemes in Xinjiang” is not matched by effective action.

The MPs accuse ministers of setting lax requirements on companies to remove forced labour from their supply chains, failing to sanction the Chinese official most responsible for mass atrocities, and failing after six months to publish “an urgent review” of UK trade controls from Xinjiang.

They also urge ministers to join the UK parliament in describing what is happening as genocide, saying the tactics of naming and shaming has been shown to be more effective than closed-door diplomacy.

A special fast-track asylum system for Uyghurs is also proposed. The all-party report also calls for technology firms underpinning what is described as Xinjiang’s police state to be banned from the UK.

The report is certain to provoke an angry reaction from the Chinese government, but one committee member, Alicia Kearns, said MPs could not shy away from making criticisms.

Kearns said: “It’s time for big boy politics. You cannot work with any partner on a best friend basis. We are the mother of all parliaments and if we are not willing to speak up for those that others seek to silence, then what parliament is going to do it?”

The report says: “The Chinese government is responsible for the mass detention of more than a million Uyghurs, for forcing them into industrial-scale forced labour programmes, and for attempting to wipe out Uyghur and Islamic culture in the region through forced sterilisation of women, destruction of cultural sites, and separation of children from families.

“The mass incarcerations and connected factories and farms mean it should be assumed that any product originating from Xinjiang is the product of forced labour. While much focus has been placed on the textile and apparel sector, other areas such as solar energy, agriculture and electronics also bear a substantial risk of using forced labour.”

It says as many as 570,000 people are forced to pick cotton, often paid little to nothing.

As a remedy it proposes that “until there can be definitive proof that products are not tainted by forced labour, UK companies and consumers should not be purchasing them”. It also calls for a government import ban on cotton and other products sourced to forced labour, something Tugendhat said was in compliance with WTO rules.

More than 80% of China’s cotton comes from Xinjiang, and China provides a quarter of the world’s cotton products. Similarly, 40% of UK solar panels have Xinjiang-sourced materials.

The report also proposes that “the British Olympic Association does not participate in the opening or closing Beijing 2022 ceremonies, beyond one representative carrying the union flag. It should abstain from sending government officials to any ceremonies or functions, strongly discourage UK businesses from sponsoring or advertising at the Olympics, encourage fans and tourists to stay away, and discourage athletes from supporting or accepting the Chinese government’s propaganda efforts.”

The report calls for a ban on the use in Britain of surveillance equipment supplied by the Chinese firm Hikvision, saying the firm operates in Xinjiang and so has helped turn the province into “a modern police state where advanced technology is deployed to support an unprecedented level of surveillance, invasion of privacy and repression”.

At the same time the report praises the government’s diplomatic efforts to raise the issue internationally, and accuses China of using its belt and road initiative as a means of putting pressure on many Islamic countries not to speak out against the atrocities in Xinjiang.

Tugendhat, who has already been personally subject to Chinese government sanctions, said there was a growing need to adopt a tough approach. “We are seeing a growing nationalism in China and we need to be cautious that what we are not doing is being seen to be feeding the crocodile and hoping to be eaten last.”

A Foreign Office spokesperson said: “The evidence of the scale and the severity of the human rights violations being perpetrated in Xinjiang against the Uyghur Muslims is far-reaching, and paints a truly harrowing picture.

“The UK government has led international efforts to hold China to account for its human rights violations in Xinjiang at the UN. We will carefully consider the findings of this report.”
Add Comment