Headline CPI rate will add to cost of living crisis, fuelled by rises in food and transport costs

UK inflation has increased to 9.1%, its highest rate in 40 years amid record prices for petrol and the soaring cost of food.

The figures from the Office for National Statistics showed an increase in May from 9% in April, as measured by the consumer price index, in a reading that matched the forecasts of City economists. In a fresh high, the headline inflation rate has hit a level not seen since February 1982, piling pressure on households in the cost of living crisis.

Inflation is being fuelled by food and non-alcoholic drink prices, which are rising at the fastest annual rate since 2009, the ONS said, with the most dramatic increases seen in the cost of bread, cereals and meat.

Soaring prices for petrol and diesel also drove up inflation in May, adding to the pressure on motorists and business costs with a 32.8% jump motor fuels over the past year – the biggest annual increase on records dating back to 1989. 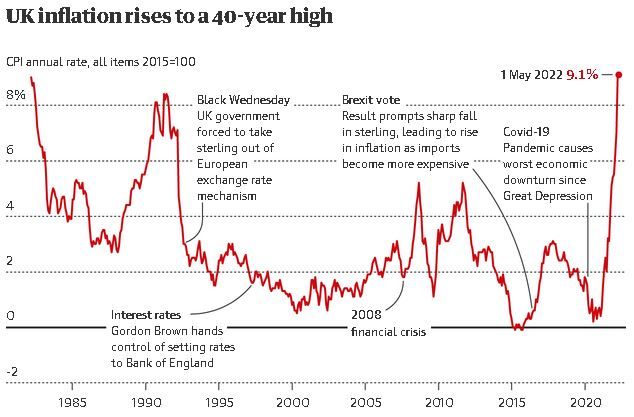 ONS said the retail price index, which tends to swing higher than CPI, rose 11.7% in May.

Last week, the Bank of England said inflation was on track to reach 11% later this year amid soaring gas and electricity prices. Wednesday’s data will be seized on by rail unions who are locked in a bitter dispute with ministers over pay, as they push for wages to keep pace with the cost of living.

Millions of commuters were forced to stay home or struggle through traffic to work on Wednesday during a second day of rail strikes, in the biggest coordinated industrial action on British trains since the 1980s. The country is bracing for a wave of disruption, with unions representing teachers and Royal Mail staff announcing this week they were considering taking industrial action over pay.

Boris Johnson has warned workers against pushing for bigger wage increases to prevent a “wage-price spiral” from taking hold that would keep inflation persistently high for longer.

However, the government has decided to allow pensioners a full inflation-linked increase, by restoring the pensions triple lock. In a move design to appeal to the Tory base – pensioners tend to be more likely to vote for the Conservatives – Simon Clarke, the chief secretary to the Treasury, confirmed that pensions would increase in line with September’s CPI. The policy is likely to deliver a double-digit increase in the state pension.

Jim O’Neill, a former Treasury minister under the Tories, said it was“ludicrous” to be protecting pensioner incomes when younger people’s wages were being eroded, and criticised the government’s lack of economic policy in the face of soaring inflation.

Lord O’Neill, a crossbench peer who is now helping with a business policy review for Labour, said the government did not have a “clear and articulate policy framework” for its economic programme.

Asked on the BBC’s Radio 4 Today programme why pensions were rising in line with inflation when public sector pay was not, he said: “I have
no idea. iI seems to me pensioners, given the pressure on fiscal policies and inequalities, the constant protection of pensioners seems ludicrous in itself and in these circumstances particularly crazy.”

Unions argue that companies raising their prices is responsible for pushing the inflation rate higher.

Sharon Graham, the general secretary of Unite, said: “Runaway profits are driving the inflation that is threatening a national pay cut and yet the vast majority of politicians remain silent.”

Rachel Reeves, the shadow chancellor, said: “Though rapid inflation is pushing family finances to the brink, the low wage spiral faced by many in Britain isn’t new. Over the last decade, Tory mismanagement of our economy has meant living standards and real wages have failed to grow.”

Prices for furniture, household equipment and maintenance rose by 11%, the biggest annual increase since 2006.

Economists said inflation would rise further in the coming months, fuelled by fresh records for petrol and diesel in June, and that rising food prices would hurt the poorest families because they spent a larger proportion of their income on essentials than wealthy households did.

Jack Leslie, senior economist at the Resolution Foundation, said poorer families were already experiencing personal inflation rates in the double digits. “The latest inflation is worryingly high, but will feel low for consumers as it predates the big spike in petrol prices over the past month.”

The chancellor, Rishi Sunak, said the government was using all the tools at its disposal to bring inflation down and combat rising prices. “I know that people are worried about the rising cost of living, which is why we have taken targeted action to help families, getting £1,200 to the 8 million most vulnerable households,” he said.

Dominic Raab, the deputy prime minister, defended the government’s stance on public sector pay, saying raising wages could lead to a “vicious cycle of inflation”. He said it was right to hold against higher wages for rail workers, who are striking this week over pay and redundancies, saying the government must not give in to “militant unions”.

Defending the decision to raise pensions in line with inflation, Raab said: “[Pensioners] are particularly vulnerable and they are disproportionately affected by the increase in energy costs which we know everyone is facing.”