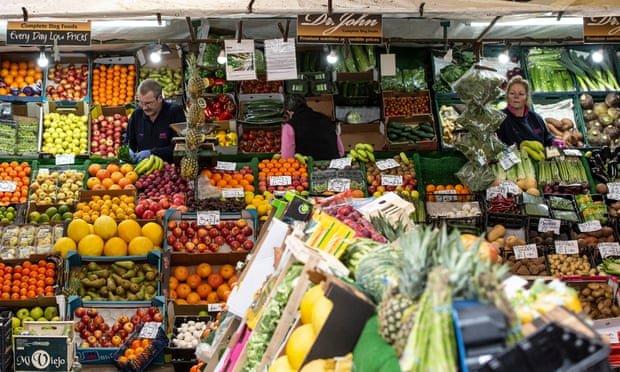 UK increasingly reliant on fruit and veg from climate-hit countries

The UK is increasingly reliant on fruit and vegetables imported from countries most vulnerable to the effects of the climate crisis, which could lead to supply problems, experts say.

A study published in Nature Food on Monday found that the proportion of fruit and vegetables supplies in the UK that was grown domestically dropped from 42% in 1987 to 22% in 2013. At the same time, the proportion imported from “climate-vulnerable” countries – those worst hit by climate breakdown – increased from 20% to 32%.

The research was carried out by the Centre on Climate Change and Planetary Health at the London School of Hygiene & Tropical Medicine (LSHTM). The lead author, Dr Pauline Scheelbeek, said a combination of trade patterns and the escalating climate crisis meant the supply of fruit and vegetables in the UK was increasingly insecure.

“The increased reliance on fruit and vegetable imports from climate-vulnerable countries will, if no adequate climate change adaptation measures are taken in the production countries, lead to fruit and vegetable supply problems in the UK and potentially affect price and consumption of such foods,” she said.

“This could be a major challenge in our efforts to promote higher fruit and vegetable consumption in the UK, both for health and environmental reasons.”

The team found that there had been major shifts in the types of fruits and vegetables eaten in the UK, with imported tropical fruits such as pineapples and bananas on the rise while consumption of homegrown vegetables such as cabbages, carrots and peas declined. 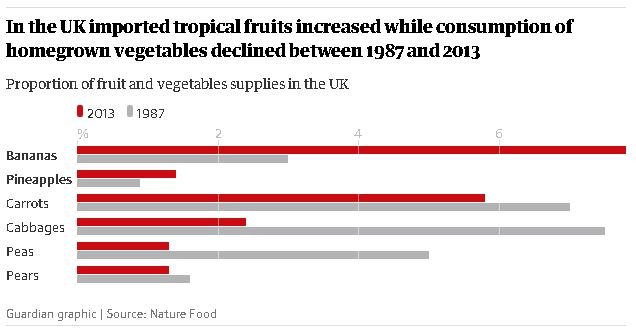 Prof Alan Dangour, the director of the LSHTM climate centre, said: “The government cannot ignore these trends or it will be failing in its primary duty to protect its people from future shocks. [It must] do more now to support national food production, build resilience into the national food system and ensure the supply of healthy and sustainable diets for all.”

The research team said the findings were particularly important as ministers attempt to hammer out post-Brexit trade deals and tackle obesity and wider public health.

“The implications of vulnerability of our trade strategy cuts across traditional policy silos such as diets, health, agriculture, economy and the environment,” Scheelbeek said. “We need to rethink our trade strategy to reduce dependency on climate vulnerable countries, import responsibly and look into possibilities to enhance consumption of sustainably grown fruit and vegetables, including those produced in the UK.”