People on social media have been comparing the high temperatures in much of the UK with the heatwave of 1976, suggesting that the severity of the current hot weather is being exaggerated.

So, what does the evidence show?

The peak that year was 35.6C. That has already been beaten by the current temperatures and on Tuesday it could go as high as 41C.

The heatwave of 1976 started in June and lasted for two months. There was a lack of rainfall and a significant drought, with the government enforcing water rationing. 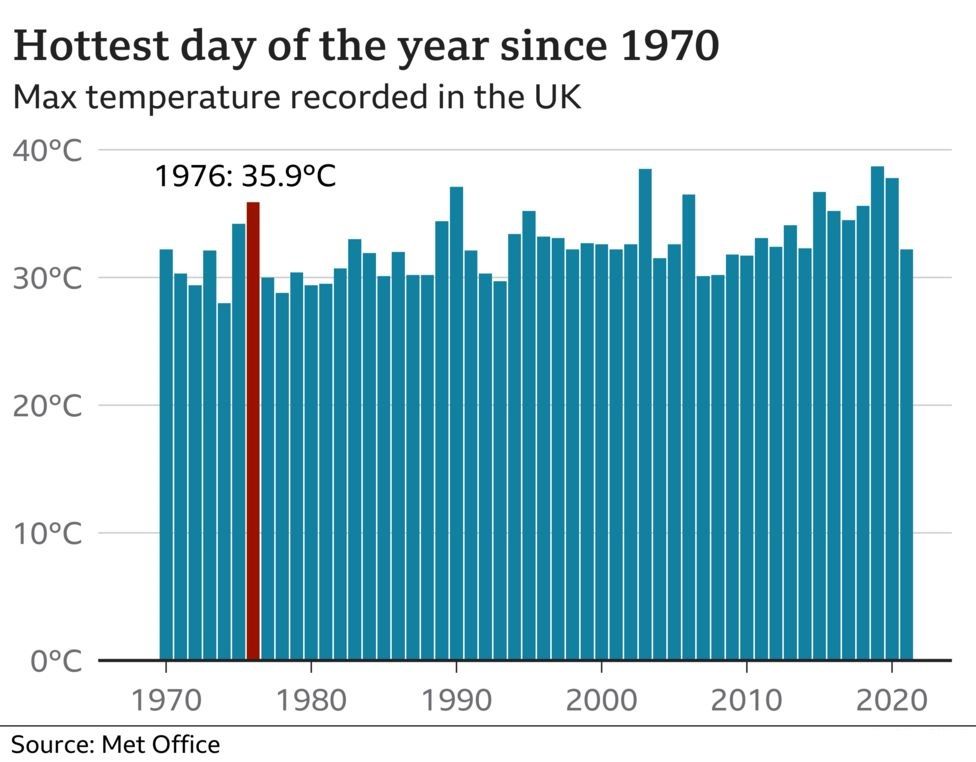 The UK has been slowly getting warmer since the 19th Century, and this has sped up. In the past three decades the country has become 0.9C warmer on average, according to the UK State of the Climate report in 2020.

Nine out of ten of the hottest days ever recorded in the UK have been since 1990, according to the Met Office.

1976 ranks 12th in the list of the hottest UK days on record (some of these, not shown in the chart above, have occurred in the same year).

"1976 was indeed a heatwave and we have had heatwaves before, but the point is they're happening more often and they're becoming more intense," says Prof Hannah Cloke, a climate scientist at the University of Reading.

There is also the scale of the heatwaves to consider, when comparing temperatures to those in 1976.

That summer, the UK and France were among a handful of countries experiencing high temperatures.

But if you look at the heat maps (produced by NASA) for June 2022, it shows many more countries affected.

"We can easily see how much warmer the global climate has become - with very few areas actually colder than normal," says BBC Weather presenter, Matt Taylor. 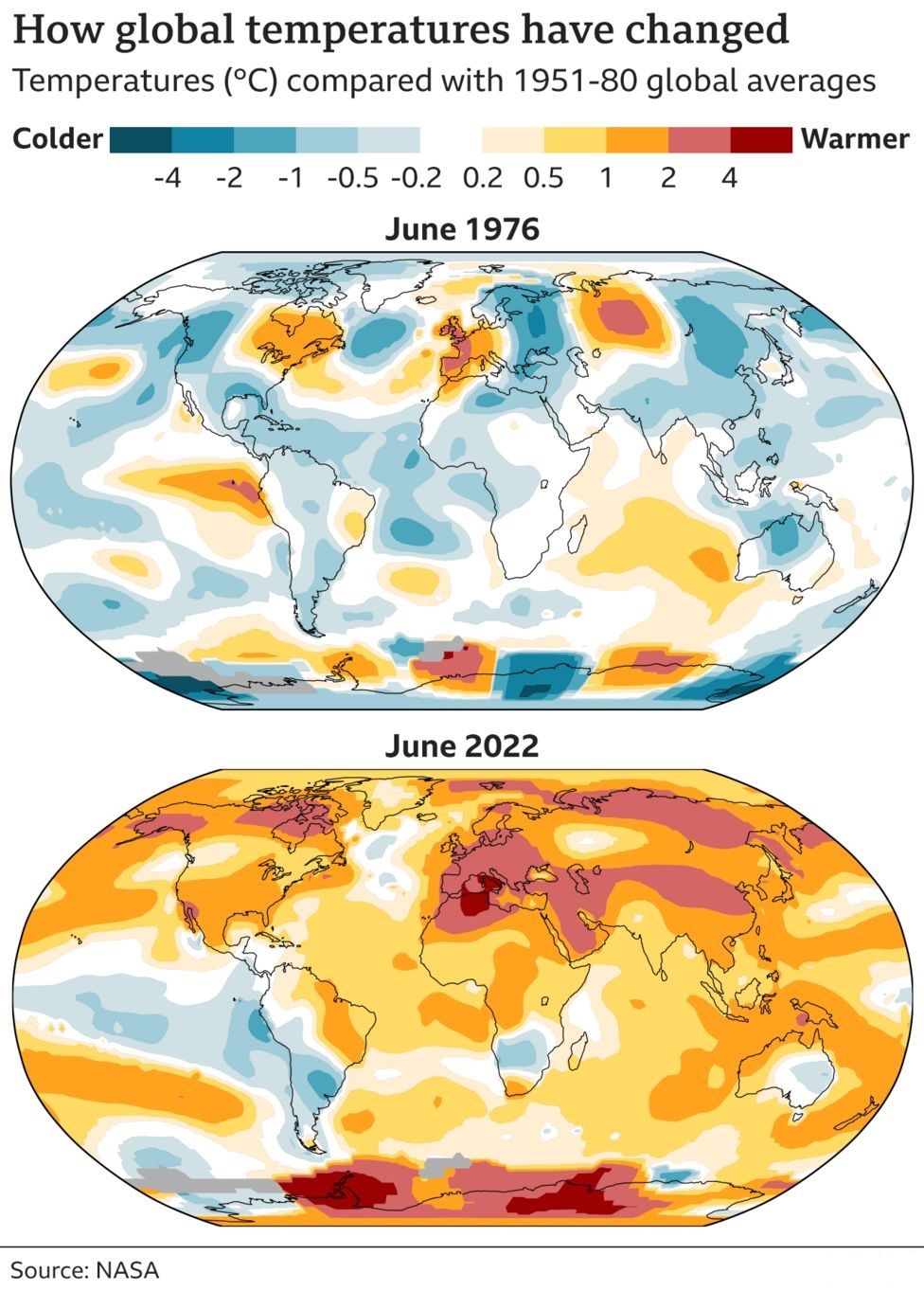 Who's spreading the misleading comparison?

Suggestions that there is nothing unusual about this heatwave appear to have found a willing audience among climate change sceptics.

Hundreds of people have shared their experiences of the 1976 heatwave on social media, with some making the misleading suggestion that the current heatwave is "no different". 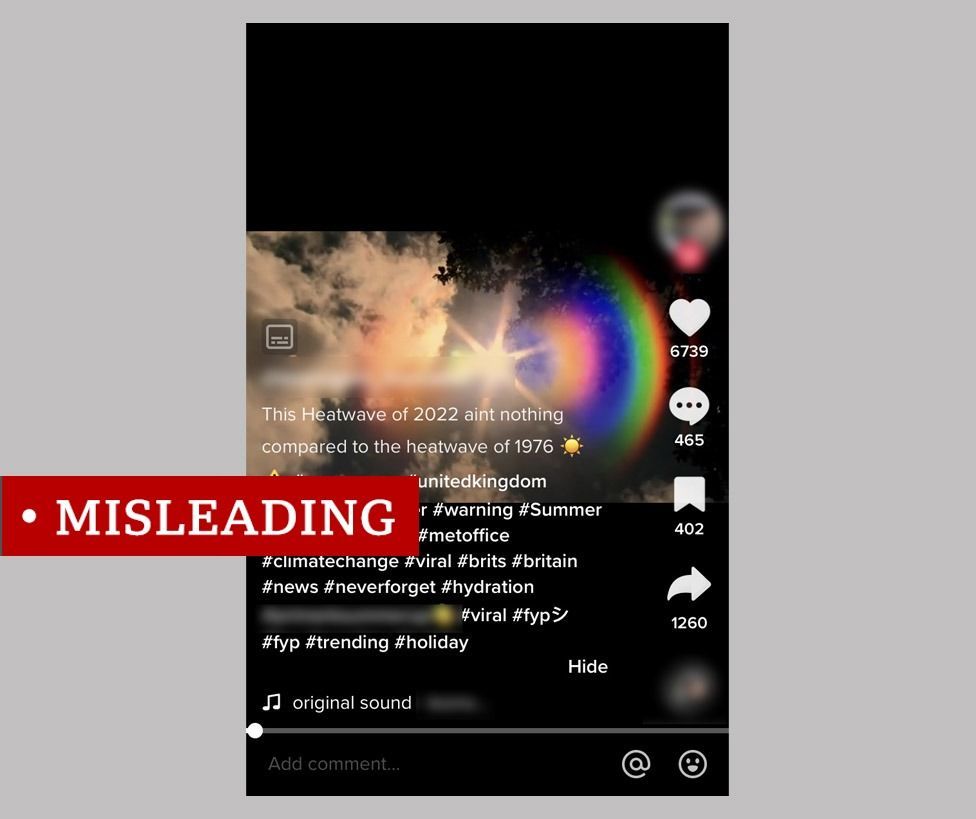 Others have accused the Met Office and the media of spreading "alarmism" and "hysteria". Some have suggested people need to "toughen up", describing those complaining about the heat as "snowflakes".

But even in the 1976 heatwave - which saw lower temperatures - excess deaths in parts of the country were up 30%.

The comparison with the 1976 heatwave has also proven popular among users sharing conspiracy theories - including unfounded claims that a "climate lockdown" is about to be imposed.

How is the current heatwave linked to climate change?

The Met Office estimates that this heatwave has been made ten times more likely because of climate change.

The overwhelming majority of scientists agree greenhouse gases - which trap the sun's heat - are causing a rise in global temperatures and climate change.

This has brought more extreme weather. Periods of intense heat do occur within natural weather patterns, but they are becoming more frequent around the world, more intense and are lasting longer as a result of global warming.

"We should expect more and longer heatwaves in the future," says Prof Nigel Arnell, a climate scientist at Reading University.

Amid inflation, people desperate for cash are turning to pawn shops