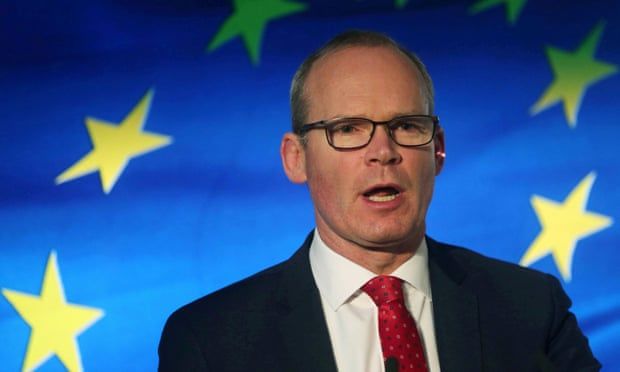 The EU fears that Boris Johnson wants to “dismantle” the Northern Ireland protocol, the Irish foreign minister has said, as relations between Brussels and London deteriorated again after remarks by the Brexit minister David Frost in the past 24 hours.

Simon Coveney told RTÉ on Sunday that EU leaders feared the worst after what he felt was a provocative article written by Lord Frost and the Northern Ireland secretary, Brandon Lewis, in the Irish Times on Saturday.

“Many in the EU are interpreting the UK’s response as essentially saying: ‘Look, concessions don’t matter. What is required now is to dismantle elements of the protocol piece by piece,’” he said, adding. “That is going to cause huge problems.”

Coveney expressed bafflement over the article, coming just days after a three-month pause was agreed between Brussels and London in the trade dispute over the sale of sausages from Great Britain in Northern Ireland.

In a sign of the continuing fragility of relations between the EU and the UK, Coveney complained that London has barely acknowledged the EU’s flexibility on the protocol including a pledge to remove barriers to the supply of medicines to Northern Ireland. The article states: “New cancer drugs can’t be licensed for Northern Ireland.”

Coveney told RTÉ’s This Week the article was “a very strange way to make friends and build partnerships” coming two days after the EU and the UK agreed to extend the deadline over the sale of sausages and chilled meats.

In the piece, Frost and Lewis say Wednesday’s agreement was “welcome” but that it addressed “only a small part of the underlying problem”, claiming the “process to resolve all these difficulties” was “creating a series of rolling crises as we lurch from one deadline to another”.

Coveney suggested this was another attempt to lay blame at the EU’s door as it was the UK that had requested a three-month delay.

He said: “Making statements like the EU are taking ‘a theological approach frozen in time that doesn’t deal with the reality that exists’, an exact quote from that article, is essentially blaming the EU for not being able to implement the protocol.

“The truth here is the only side that has shown flexibility … has been the EU. The challenge here is that both sides have to take responsibility and ownership.”

“The contribution from the British government isn’t helping that [peace and stability], because every time Lord Frost or the secretary of state for Northern Ireland says the protocol is not sustainable, that reinforces in the minds of many people who are concerned and frustrated by the protocol, that the protocol needs to change.

“Instead what needs to happen here is that the EU and the UK have got to work in partnership,” Coveney said.

The article states that the UK needs “constructive and ambitious discussion with the EU which deal with the actual reality”. It says “opposition is growing” against the protocol in Northern Ireland, which “is not a stable basis for the future”.

The ministers say that “consent is also fraying because there is a sense that the current arrangements could corrode the link between NI and the rest of the UK”, pointing out that in 2018 inward trade from Great Britain to Northern Ireland was “five times” greater than imports from the Republic of Ireland.

A UK government spokesperson said: “This is not about concessions. It is about finding sustainable arrangements for Northern Ireland and protecting the Belfast [Good Friday] Agreement in all its dimensions.

“The UK government has provided nearly £500m this year to support businesses moving goods under the protocol and we are committed to working consensually with the EU to resolve the issues which are causing significant disruption on the ground.

“We will consider all options available if solutions cannot be found, because our overriding responsibility is to support peace, prosperity and stability in Northern Ireland.”

In separate remarks in an interview with the Sunday Telegraph, Frost said it was reasonable to suggest resetting the protocol now that the implications of it on the ground were known, with particular opposition in unionist and loyalist communities.

“It just doesn’t seem unreasonable to us to say: these arrangements aren’t working out quite as we both thought. Look at the effects and the way it’s playing out; we really should take another look at how it’s happening.”
#boris johnson
Add Comment