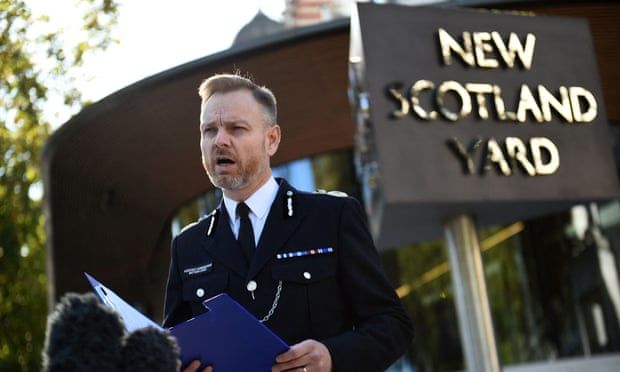 The country’s most senior counter-terrorism officer has said the vast majority of those plotting terrorist atrocities are British born or raised and not asylum seekers.

The remarks from the Met police assistant commissioner Matt Jukes, the head of counter-terrorism policing, came after Priti Patel claimed the suspect in the Liverpool bomb attack was able to exploit Britain’s “dysfunctional” asylum system to remain in the country.

The home secretary was criticised after she said the system was a “complete merry-go-round”, with a “whole industry” devoted to defending the rights of individuals intent on causing harm.

The Liverpool suspect, Emad al-Swealmeen, 32, is understood to have arrived in the UK from the Middle East in 2014 and had an application for asylum rejected the following year but was still in the country and was seeking help from his local MP. He died in an explosion in a taxi outside Liverpool Women’s hospital shortly before 11am on Remembrance Sunday. He had experienced mental health issues.

On Wednesday, Jukes said: “While some recent attacks have been carried out by asylum seekers, the majority of the terrorist threat to the UK is home-grown, and posed by British-born extremists. We also have a strong presence at UK ports and we work closely with our colleagues at Border Force to identify anyone who may be of concern coming into, or attempting to come into, the UK.”

Up to 80% of those involved in attacks or attack planning in 2019 were British born or raised, police believe, indicating domestic social issues were among the root causes.

Terror chiefs fear that the two incidents in the past month – the first being the killing of MP Sir David Amess during a constituency surgery – could spur on other violent extremists. Jukes said help from the public was vital: “We need the public to [… be] more vigilant and trust us with their concerns. In the last year, counter terrorism policing received around 10,000 reports from the public about suspected terrorist activity – of those, a fifth provided useful intelligence which helps our investigations, and potentially save lives.”

Patel had told reporters that the Liverpool incident proved the government was right to change the asylum system. “The case in Liverpool was a complete reflection of how dysfunctional, how broken, the system has been in the past, and why I want to bring changes forward,” she said.

“A whole sort of professional legal services industry has based itself on rights of appeal, going to the courts day in, day out at the expense of the taxpayers through legal aid. That is effectively what we need to change.

“These people have come to our country and abused British values, abused the values of the fabric of our country and our society. And as a result of that, there’s a whole industry that thinks it’s right to defend these individuals that cause the most appalling crimes against British citizens, devastating their lives, blighting communities – and that is completely wrong.”

Nazir Afzal, the former chief crown prosecutor for north-west England, said: “Blaming lawyers is very dangerous and is a deflection from the competence of her own government.”

It has been reported – but not confirmed – that Swealmeen lost his asylum claim in 2015. He made a legal attempt to gain permission to stay in the UK but it was rejected without being considered in court.

It raises questions as to whether the Home Office then sought to remove him. The Guardian established that he contacted the office of Paula Barker, the Labour MP for Liverpool, Wavertree, last year. The Home Office is thought to have rejected his latest claim for asylum in December 2020.

The Church of England also faced claims it was helping asylum seekers to “game the system” after it was revealed that Swealmeen had converted to Christianity.

A spokesperson said the C of E welcomed all people who “choose to make a commitment to Christ, but … clergy must be confident that those seeking baptism fully understand what it signifies. However, it is not the role of clergy to establish the legitimacy of asylum claims and to assess security implications.”

The Rev Canon Stuart Haynes, of Liverpool Cathedral, where Swealmeen was baptised and confirmed, said: “We are here to help and support people, and we would be abdicating our responsibilities as a church if we didn’t help those in need. It’s down to the Home Office to decide if people are here [in the UK] legitimately or not. That’s not our job.”

He said the cathedral had developed “robust processes for discerning whether someone is expressing a genuine commitment to faith. These include requirements for regular attendance alongside taking part in a recognised Christian basics course.”

In a minority of cases, he said, someone may ask a priest for a reference or for support in the asylum process. “We would expect someone to be closely connected with the community for at least two years before we would consider supporting an application.”

The C of E spokesperson said: “We are not aware of any evidence to suggest a widespread correlation between conversion to Christianity, or any other faith, and abuse of the asylum system.”
#priti patel
Add Comment