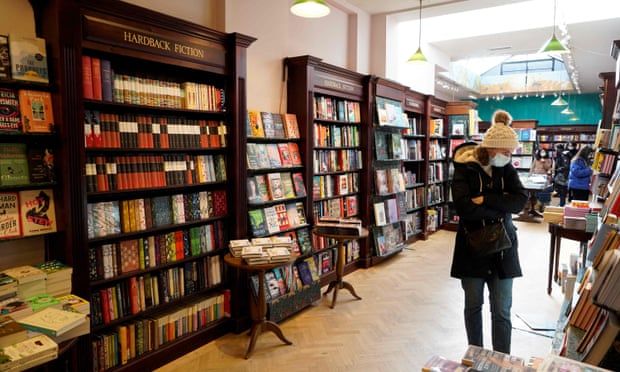 New figures from the Publishers Association show fiction and audiobooks did particularly well, with value of consumer sales up 7% on 2019 despite bookshop closures

Fiction sales in 2020 soared by more than £100m for UK publishers, as readers locked down at home made their escape into books, with audiobook sales also climbing by more than a third.

New figures from the Publishers Association show that fiction sales for UK publishers rose by 16% from £571m to £688m in 2020, with key titles cited for the rise including Maggie O’Farrell’s Women’s prize-winner Hamnet, Douglas Stuart’s Booker-winner Shuggie Bain, Richard Osman’s cosy crime novel The Thursday Murder Club, Bernardine Evaristo’s Girl, Woman, Other, and Delia Owens’ Where the Crawdads Sing. The bestselling title of last year was Charlie Mackesy’s philosophical picture book The Boy, the Mole, the Fox and the Horse.

The PA said the results demonstrated how “the nation turned to books for comfort, escapism and relaxation” in 2020, and that “reading triumphed, with adults and children alike reading more during lockdown than before”.

“It’s quite remarkable,” said PA chief executive Stephen Lotinga. “We are delighted but also a little surprised that the industry has managed to do so well. During lockdown, people had more time on their hands and were looking for escapism. There’s been a rediscovery of a love of reading.”

But the PA acknowledged in its report that despite the success of publishers, they were “acutely aware of the difficulties facing authors” in the absence of school visits, marketing tours and literary festivals during the pandemic. “Making sure authors can continue to protect their livelihoods will remain a focus of the industry as we move forward,” the trade body said.

When asked about authors’ pay, Lotinga said, “A large portion of these sales would have gone to authors directly through their royalty rates – so we’ve managed to get more money to authors than ever before, which is what our industry exists to do. All that said, there are clearly some authors who haven’t had a good year and have really struggled, and we shouldn’t ignore that at all. Some authors are reliant on second jobs to supplement their incomes and they haven’t been able to do that. And there are big failures in some of the additional support schemes the government had in place – a lot of authors weren’t able to access them.”

Many authors’ fortunes have lain in stark contrast to their publishers over the last year. As publishers such as Bloomsbury issue profits upgrades, thanks to an “exceptional sales performance”, the Society of Authors gave out more than £1.3m to more than 900 authors in grants through its Authors’ Contingency Fund in 2020.

“We know that publishers are doing a lot to support reading for pleasure and the wider ecosystem. It is obviously also good news that books are continuing to sell well and some authors have seen royalties increase,” said the SoA’s chief executive Nicola Solomon. “However many have suffered because of the lack of visibility of their books and many more have lost income from activities that support their royalty income such as school visits, casual teaching and other appearances. Many have been ill or bereaved, or suffered by falling between the cracks in the government schemes.”

While “some” publishers have already donated to the Authors’ Contingency Fund, the SoA is “disappointed that they have not done more”, Solomon said.

“The fund is still open, we are still receiving applications for hardship grants, and our ongoing research into author incomes has found no improvement in earnings or eligibility for statutory support,” she said. “Publishers have worked hard to build an industry based more on equal opportunity, but the health crisis risks a reversal of those efforts, with the people most likely to sustain careers as writers, illustrators or translators [being] those who can afford to do so regardless.”

Non-fiction book sales also grew for UK publishers in 2020, up 4% to £1bn with top-selling titles including the Pinch of Nom cookbooks and Jamie Oliver’s 7 Ways. Children’s sales also climbed 2% to £396m. But the biggest growth was seen in audio downloads, which rose by 37% compared to 2019, to £133m.

Overall, the total income from consumer sales rose 7% to £2.1bn, while the invoiced value of sales of books, journals and rights/co-editions combined – including educational and academic titles – rose 2% to £6.4bn. The growth masks a slump in education publishing, which saw income fall 21% to £528m. The fall was driven by a 27% decline in export sales of educational books, which the PA said was “severely impacted” by the pandemic.

“Despite the overall positives, we shouldn’t ignore that it’s been a particularly challenging year for education publishers, smaller publishers, booksellers and authors whose livelihoods have been enormously disrupted,” Lotinga said. “With bookshops now able to reopen, and physical events returning, we are optimistic that people will soon be able to enjoy books together again. We need to harness this return to reading and build on the huge opportunity this presents.”
Add Comment