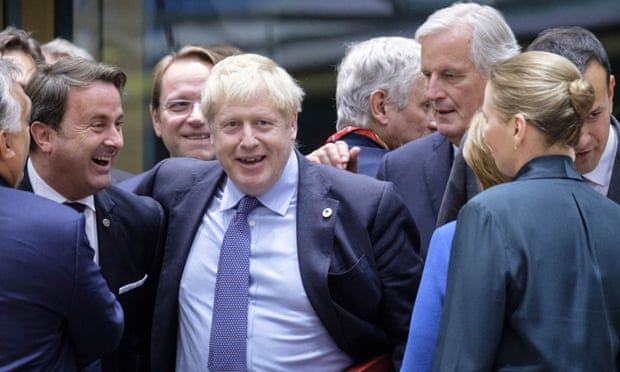 The government has rejected claims it owes the European Union £41bn for a Brexit “divorce bill”, even as it emerged the first payments have been made.

Brussels and Westminster reopened a dispute about the size of the bill, after the publication of the EU’s 2020 accounts revealed the European Commission expected €47.5bn (£40.8bn) from the UK, a sum higher than British estimates.

The prime minister’s spokesperson said: “We don’t recognise that figure. It’s an estimate produced by the EU for its own internal accounting purposes. It doesn’t reflect all of the money owed back to the UK, which reduces the amount we pay. Our estimate remains in the central range of £35bn-£39bn, and we will publish full details in parliament shortly.”

The £35bn-£39bn range was presented by British officials during the Brexit negotiations, while the government’s fiscal watchdog, the Office for Budget Responsibility, put the bill at €41.4bn (£37.1bn) in 2018.

Despite the outbreak of tensions, the commission said the UK had already begun to pay its bill. “There was one payment that was done in June … and there will be one in July, August and September. And then in September we will be sending another bill,” a commission spokesperson said. “So far everything that had to be done was done, so we have no indication whatsoever that the overall figure will be contested.”

In the run-up to Brexit, the UK paid net annual membership fees of £8.1bn-£10.7bn (€9.5bn–€12.5bn) a year, which opened access to the European single market – an arrangement the government ceded in the name of sovereignty.

The Brexit divorce settlement consists of bills for EU infrastructure and social projects agreed by previous British governments, as well as pension and healthcare costs for retired EU staff, which accrued over the UK’s 47 years of membership.

British officials say the EU figure excludes money owed to the UK. The EU’s accounts, however, highlight sums Brussels expects to pay into British coffers. European officials expect to send €1.8bn to the UK, representing the British share of fines on rule-breaking companies, collected by the EU competition authority.

British officials also highlight the uncertainty of the Brexit bill, which includes liabilities that may never come due, for example countries defaulting on EU loans.

The argument continues despite the financial settlement agreed as part of the Brexit divorce deal between the EU and Boris Johnson in October 2019. Through the Brexit deal, the two sides settled on a methodology to calculate the bill, rather than a fixed sum. Until this month, the EU had never revealed its estimate.

The withdrawal deal also covered citizens’ rights, and the Northern Ireland protocol, which the UK government is now seeking to change.

The government is expected to publish a statement on EU finances next week, while the Brexit minister, David Frost, has promised parliament will see his plan on revising the Irish protocol before the summer recess.
#boris johnson
Add Comment