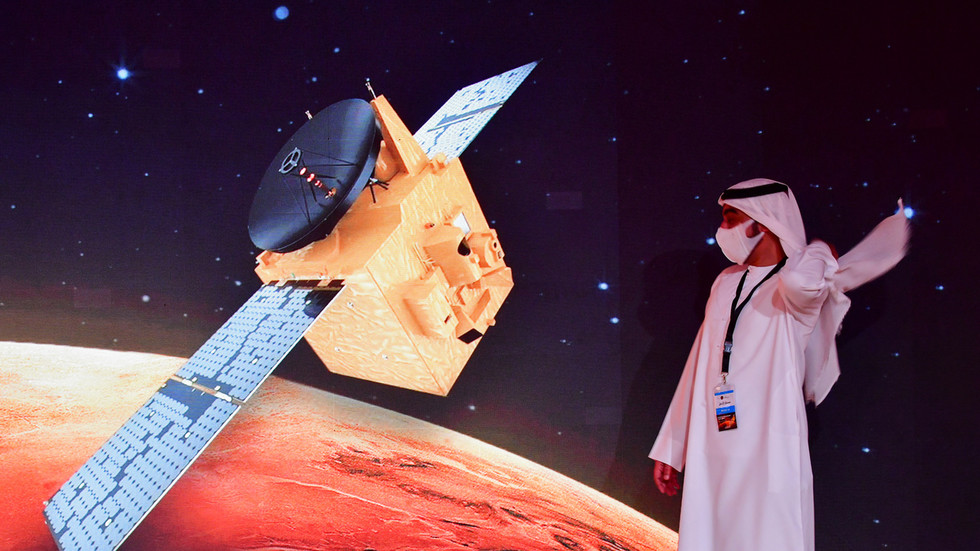 The United Arab Emirates is the first Arab nation to successfully reach Mars as its robotic probe entered orbit above the red planet on Tuesday, beginning a two-year mission to map and detail the Martian climate.

The UAE mission is the first of three expeditions setting their sights on Mars in the coming weeks, with Chinese spacecraft Tianwen-1 scheduled to begin its orbit on Wednesday and land a module and rover on the planet’s surface in May. China’s space agency will attempt to put those down in the large impact crater known as Utopia Planitia.

Meanwhile, NASA’s Perseverance mission is scheduled to reach Mars on February 18, with the US space agency attempting to immediately place a rover in a crater, Jezero, which was once a lake in the northern hemisphere of the planet. Scientists think it’s a site where signs of life – if indeed any did exist on the planet – could be preserved. NASA also plans to deploy a helicopter-type surveillance robot as part of the mission.

Just getting to Mars has capped a remarkable journey for the UAE, a small nation on the Persian Gulf known more for its skyscrapers and deserts than for scientific achievement. Live mission updates are being projected across Dubai from the Burj Khalifa, the world’s tallest building.

Visitors arriving at UAE airports also received a Martian ink stamp on their passports on Tuesday to mark the historic event.

The Hope probe project aims to look at how dust storms and other weather conditions near the surface affect the speed at which Martian air is leaking away into outer space. The orbiter is being commanded by mission control at the Mohammed bin Rashid Space Center (MBRSC) in Dubai, with automated instructions taking 11 minutes to cover the 190-million-kilometer distance from Earth.

Launched on July 20, 2020, Hope carried roughly 800 kilos of fuel – about half of which was likely used up in the maneuver to put the SUV-sized satellite into an elliptical orbit, slowing down from a blistering pace of 120,000kph to 18,000kph.

The red planet was first reached in 1960 by a spacecraft from the Soviet Union, and it took a decade longer before a mission succeeded in putting a lander on the Martian surface. The USSR’s Mars 3 lander touched down in December 1971, but contact was lost after just 14 seconds.